Economy ofGUATEMALA Guatemalas economy is typical of a developing country, constituting the largest economy in Central America, and the ninth in Latin America.
GDP, accounts for one third of regional GDP. The country maintains sound macroeconomic fundamentals in recent years with a high level of reserves, a controlled level of public deficit (2.8 in 2011) and the external deficit and low public debt, 24.3 of GDP in 2011.
The economic level of the population is medium low with 50 of its inhabitants are below the poverty line and 15 in extreme poverty.

The largest sector in the Guatemalan economy was traditionally agriculture, Guatemala being the largest exporter of cardamom, the fifth largest exporter of sugar and the seventh largest producer of coffee. The tourism sector is the second source of foreign exchange for the country after remittances, the industry is an important branch of the Guatemalan economy and the service sector is increasing in importance. The sectors that contribute most to GDP in Guatemala are:

Agriculture Livestock: The agricultural sector makes up a quarter of GDP, two-thirds of exports, and half of the workforce. The main agricultural products are coffee, sugar cane, bananas and plantains. snuff, cotton, corn, fruits and all kinds of vegetables are also grown. The country known for the cultivation of non-traditional agricultural products such as broccoli, peas, Brussels sprouts, sesame, asparagus and chilli, which mostly are used in foreign trade. Fishing is primarily important in the south coast, in the departments of Escuintla and Retalhuleu, the main exports are shrimp, lobster and squid.
By its aridity, the so-called dry corridor covering part of the departments of Baja Verapaz, Zacapa, El Progreso, Jalapa, Chiquimula, Jutiapa and Santa Rosa, is very vulnerable to drought, it does not have food security as well as having a high degree extreme poverty.

Mining In Guatemala the only metal in large quantities is nickel, whose extraction is mostly exported; there are great mines of gold and silver and jade and copper.
Industry: The manufacturing and construction make up twenty percent of GDP. The main industries are engaged in food processing, vehicle assembly, electrical appliances, paints, pharmaceuticals, beverages, publishing and textiles, among others.
Tourism: Tourism became one of the main drivers of the economy, an industry that reported more than 1,800 million in 2008. Guatemala receives about two million tourists annually.
source wikipedia 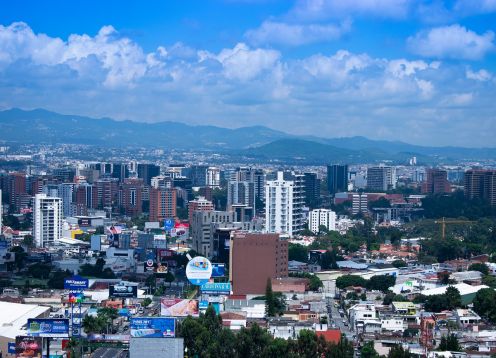 Location of GUATEMALA Guatemala is located in Central America, bordered on the north by Mexico, west and south Belize with Honduras and El Salvador, bordering the Gulf of Honduras. The relief is characterized by mountains and limestone plateaus. Its territory of 108,430 square kilometers, is slightly smaller than Tennessee, USA. UU.

History of GUATEMALA About 15,000 and 5,000 years. C. the inhabitants of this region of the Americas, as hunters and gatherers survived this change domesticated plants, especially corn, beans, and squash. This advancement of agriculture brought significant progress.

For example, produce excess crops toast control and power that gave an imbalance in the social structure, creating ranks among the inhabitants of this era. Excessive cultivation was not only for times of drought but took social expertise and the creation of classes of dealers, warriors, artisans and kings lords. This domestication process took a lot of energy and ingenuity.

Guatemala is a place which is occupied by a variety of ancient cultures that still continue to this, the inhabitants of this territory shared religious beliefs, art, architecture and technology that has made them unique in the Americas for three thousand years, as 1500 BC to 1519 AD, the time of contact with Europeans. The people of Guatemala are from the quiche-maya, language family here Quiches major groups, the Cakchiquel and Tzutuhiles Peten stand.

Spanish conquest and colonization
1523: Pedro de Alvarado was the one who began the conquest of these lands, with the Indian group Pipiles, El Peten department was not controlled in the colonial phase. 1543: The constitution of the audience strengthened an entity the government of Guatemala. Later the captain general had in jurisdiction throughout Central America to Costa Rica including Chiapas, Tabasco and Yucatan formed. 1783-1786: This was the date when Belize was handed over to Britain.

The independence
1821: Gabino Gainza, commander in chief, was the proclaimed independence. 1822-1823: Guatemala temporarily became an integral part of Mexico by the fall of the empire of Agustín Iturbide. 1823-1838: Guatemala was part of the United Provinces of Central America and utter maintain political power over the colonial period, this caused the 1826-1829 civil war and occupation by federal troops. Mariano G?lvez with their liberalism was attacked by the Creole nobility and the church, which supported the uprising of Rafael Carrera, the victory began the disintegration of the .