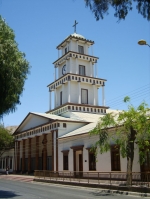 This city is capital of the Atacama region.

It is a city that its economy is based on mining and agribusiness.

It has great hotel and tourist capacity.

In Copiapo can see the first train that circle by Chile in 1851, and the third from South America.

On February 3, 1745 establishing the council of the city. The first mayor was Don Felipe Mercado.

On April 18, 1819 a devastating earthquake occurs in the city, causing major damage and deaths.

In 1832, the carrier and Juan Godoy prospector discovered the fabulous silver ore ChaÃ±arcillo kicking off an extraordinary boom, whose heritage are precious works of urban architecture and the first railway in South America between Copiapo and Caldera