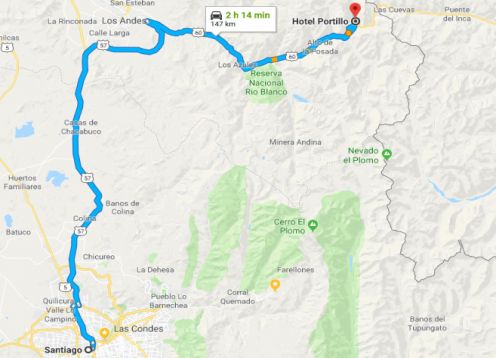 Portillo is a ski center located in the province of Los Andes, Valparaíso Region (Chile). It is one of the main winter centers of the country and the southern hemisphere.

It is located in the Andes mountain range at 2680 meters altitude and at a distance of 80 kilometers from the city of Los Andes, 164 km north of Santiago de Chile and less than 6 km from Paso Los Libertadores, on the border with Argentina. .

Portillo is the oldest ski center in South America and, to this day, the only one in the region that has hosted a ski world cup.

In 1949, and with the contribution of the Chilean government, a modest 125-room hotel was finally built. The ski center had two chair lifts for one person and a drag lift. The Mountain School of the Chilean Army was in charge of the administration of the ski center. However, the lack of government experience in the administration of a complex like this led to its privatization in 1960.

On June 15, 1961, the new complex of the Portillo ski center was inaugurated by the American Henry Purcell. Important personalities of the time were invited, and the Ski School was in charge of the Olympic medalist Othmar Schneider. As a way to promote this new place of winter sports tourism, Portillo was chosen as the venue for the 1966 World Ski Championships by the FIS. The necessary constructions for the realization of the tournament were practically destroyed in 1965 by a typhoon of the South Pacific with winds of more than 200 kph. However, the works were restarted and, in August 1966, the only skiing tournament held south of Ecuador was inaugurated, with the presence of President Eduardo Frei Montalva.