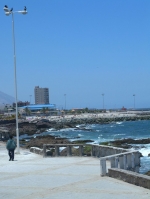 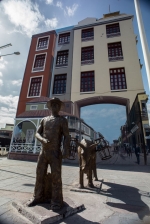 It has about 226,000 inhabitants, this being the capital of Region II.

Urban life was until recently in the foothills of the Cordillera of the coast until they made a coast over 20 km.
It is the fifth largest city has a major seaport and a railroad in Bolivia.

The economy is based mainly on mining.

Ending lengthy litigation that came from the time of American Independence, when Americans came from countries which were the old Spanish viceroys, Chile and Bolivia signed a treaty on 10 August 1866, which set the boundary at 24th parallel (about 60 km. south of Antofagasta), provided to distribute evenly taxes on existing guano and minerals to be discovered, between parallels 23 and 25 (from mussels to Paposo, approx.). Since this clause too cumbersome, we signed a second treaty of limits on 6 August 1874, which kept the border and established that people, industries and Chilean capital installed between parallels 23 and 25 would not pay increased contributions for 25 years.


Between the first and second treaty was founded Antofagasta, nitrate found in the area, built the rail to Salinas and discovered silver ore Caracoles.