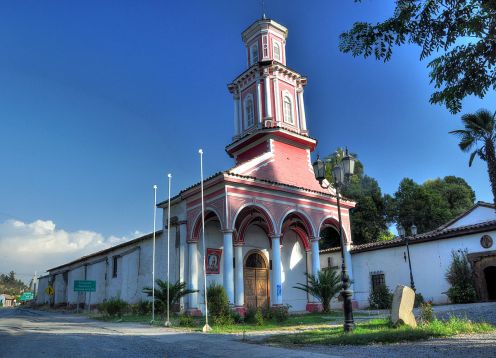 Church And Convent Of St. Francis Of Curimón

San Felipe is a town with a population of 75,000 inhabitants. This aerial view looks toward the east by the Andes Mountains in the background. Aconcagua River flows from the mountains across the valley and lead eventually reaches the Pacific Ocean. The nearby city of Los Andes is about 17 kilometers.

San Felipe s economy is imminently tertiary prevailing goods and services both public and private. The great boom in this sector is reflected in a significant increase in schools and universities in addition to commercial establishments such as banks, supermarkets and multitiendas.

Weather
As elsewhere in the Aconcagua Valley weather San Felipe and the surrounding area belongs to temperate climate system. It is characterized by hot and dry summer, high solar radiation, followed by a winter rainy, cloudy and cold. An average temperature of 14.9 Âº C

La Villa del Aconcagua township of San Felipe el Real ", was founded on August 3, 1740, by the Earl of Superunda Jose Antonio Manso de Velasco and Samaniego, who at the request of King Philip V of Spain, conquered the lands of Valle del Aconcagua. The foundation act was signed in the Franciscan Convent of CurimÃ³n, with all the solemnity of the eighteenth century itself. The land for the town was donated by the camp master Toro Don Andres Hidalgo, observed in the layout of its streets and the four creeks that surrounded all provisions of the laws of the Indies.
Subsequently, in May 1743, the Foundation was approved by the royal decrees and from that date until 1770, San Felipe remained to be simply a district of Villa del Aconcagua. But population growth and building development in the area, led the villagers to come together, creating in this way in 1770 the first council or municipality, which was composed by an assistant mayor and one provincial.

Precisely on 1 April 1770, King Charles III of Spain, who at the request of Don Juan Francisco Javier del Canto, representing the town of San Felipe del Reino de Chile, gave him the title of City and gives it a coat of weapons, for affording the privileges, privileges and immunities corresponding to the rank of city to grant him. The Fs are around the crown get the motto "Strong and Happy".

In 1813, at the times that the nation felt threatened by the Spanish army sent explicitly by the Viceroy of Peru, Abascal, to start the conquest of Chile, there was an uprising in the Andes realistic in order to seize it and San Felipe. The rebels, led by Jose Antonio Eseiza leader, after arrest most distinguished residents of Los Andes, took over the city and began their march to San Felipe. The news soon became known in this city and Colonel Jose Maria Portus, Aconcagua Regimental Commander, stationed in San Felipe, hurriedly gathered his soldiers and recruited numerous neighbors and in less than five hours, put a thousand men Weapons and forced marches, came out to meet the rebels. The meeting was entirely favorable to the Patriots sanfelipeños.

On August 5, 1813, the Board of Governors sent a note to the Governor and Cabildo of San Felipe, in which he declared that St. Philip had earned the recognition of all Chileans to have destroyed in a realistic time Eseiza conspiracy.

In this regard, the General JosÃ© de San MartÃ­n and Bernardo OHiggins gave the city the title "Hero City".

Later, in 1817 and 1818 when it definitely consolidated the independence of Chile, after the battles of Chacabuco and Maipu, was both the enthusiasm of its inhabitants that the Governing Board ratified patriot extending the "Always Heroic City of San Felipe Aconcagua.

During the nineteenth century, San Felipe ran a small village between the margins of the Aconcagua River to the south and the San Francisco estuary Quilpue the north, with small buildings chief among them the church of La Merced and Castle the Marquis of Parrhasia.

Besides buildings, San Felipe was characterized by its active participation in securing the independence of Chile, which remained latent desire for freedom and for this purpose, preserved intact the enthusiasm for the patriot cause, helping to prepare messengers the continuation of the campaign was interrupted in the disaster of Rancagua. Later in 1851, San Felipe once again appeared as the main revolutionary center in opposition to the Government. In this civil strife sanfelipeÃ±os revolutionaries resisted to the end of attacks by government troops and entrenched in the four corners of the Plaza de Armas of the city.

In the late nineteenth century, San Felipe is finally beginning to shape a peaceful city, rich in natural beauty, maintaining supremacy manifested mainly in the time it was capital of the Province of Aconcagua (including San Felipe and Los Andes).