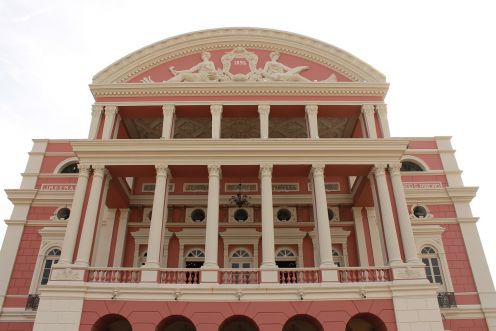 A Whole Day in the Jungle

Manaus to Indigenous Village and Meeting of the Waters Tour

One Night Adventure in the Jungle

Swimming with the Porpoises, native brazilian village and meeting of the waters

Manaus or Manao is the capital of the State of Amazonas in Brazil and is located in the Northern Region of Brazil, in the center of the world's largest rainforest, "the Amazon."

Manaus has a wide variety of typical dishes made with fish and spices native to the Amazon such as tucunaré, jaraqui, surubim, matrinxa, tambaqui, pirarucu, pacu and curimatá, among others.

The boats are the main means of transport for jungle hotels, to contemplate the meeting of the waters of the Black Rivers and Solimões, to dive with the pink dolphins in Anavilhanas and visit spas such as Praia da Lua.

It is the most populous city in the Amazon, with 2,094,391 inhabitants and approximately 2.5 million inhabitants for its metropolitan area.

Manaus has a tropical monsoon climate. With an increase in rainfall in summer and an average annual temperature of 26.5 ° C, the relative humidity is high throughout the year, with monthly averages between 76 and 89

The history of Manaus dates back to the year of 1669, when the Fort of São José da Barra do Rio Negro was built, being elevated to the category of city on October 24, 1848 in homage to the nation of the Manaus Indians.

It was released in the early twentieth century, in the rubber fever. At that time it was named "Heart of the Amazon" and "The city of forests."