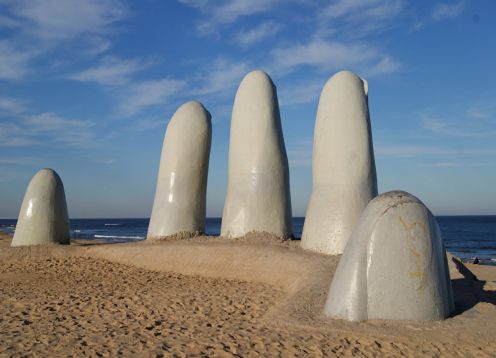 Punta del Este is the most paradisiacal point of the Uruguayan coast. Its geographical location allows natural conditions of singular beauty. White sands, blue waters, dunes, islands, lagoons, mountains and forests are combined with a varied and luxurious architecture providing a perfect balance.

Punta del Este is located on a narrow strip of land that conventionally separates the Río de la Plata from the Atlantic Ocean - although both banks are bathed by already marine waters. It has a permanent population of 12 423 inhabitants, an amount that reaches 450,000 during the summer tourist season.

In its beginnings, it was an indigenous whereabouts; then, a fishing village. Its first name was "Villa Ituzaingó" but in 1907 the name change was requested and it was finally called Punta del Este. This town was founded in 1829 by Don Francisco Aguilar, who was the first to exploit the resources of the area, developing several industries, mainly saladeros.