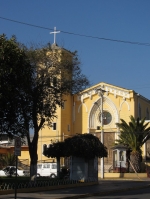 Cartagena is a small city located on the central coast of Chile, it is a commune that belongs to the Province of San Antonio in the Valparaiso Region.

On November 23, 1999, the coastal edge of Cartagena along with the sector of the house, park and tomb of Vicente Huidobro was declared a National Monument in the Typical Zone category by Exempt Decree No. 401