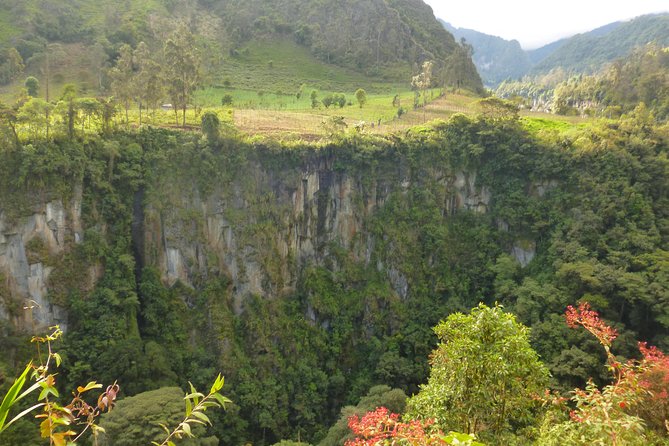 6-hours Hiking In The Combeima Canyon

Los Nevados National Natural Park is located in the Cordillera Central in the Andean region of the Colombian Andes.
from US$ 114

Los Nevados National Natural Park is located in the Cordillera Central in the Andean region of the Colombian Andes. Its surface is part of the departments of Tolima, Caldas, Risaralda and Quindeo, being distributed among the municipalities of Manizales, Villamaria, Santa Rosa de Cabal, Pereira, Salento, Villahermosa, Anzoategui, Santa Isabel, Murillo, Ibague and Casabianca.

The geological nature of the park means that it is one of the largest volcanic complexes in the country, with 6 stratovolcanoes over 4,600 meters high, as well as a large number of hot springs. The geological origin of the park is due to the subduction of the Nazca plate with respect to the Pacific tectonic plate, so its volcanoes belong to the Pacific ring of fire. In the park there are three of the six glaciers that as of 2019 are preserved in Colombia, for which it has gained national and international relevance for tourism. Given the presence of the different thermal floors of the park, it is possible to observe the transformation of the landscape as you go up. Above 3,000 meters above sea level, it is possible to see glacial erosion, typical of countries such as Norway, Switzerland or Iceland, to name a few. This erosion is evident from the recurrent U-shaped valleys, the moraines and old glacial tongues, which form cirques and tenuous valleys now covered by the paramo vegetation. This is due to the fact that in the last glaciation, in Colombia the perpetual snows reached an altitude range between 2,800 and 3,100 meters above sea level, thus evidencing an erosive process typical of latitudes close to the terrestrial poles.

The park can be accessed by vehicle from Manizales and Villamar?a, with the aim of going up to the lunar valleys of Ruiz or the Nevado Santa Isabel (Consejeras-Potos? sector) for those who wish to have contact with the snow. The other accesses in Santa Rosa de Cabal and Pereira, are to ascend only to the Nevado de Santa Isabel through the Florida-Ot?n sector. The accesses in the departments of Quind?o and Tolima, are to ascend only to the Nevado del Tolima through the Cocora Valley sectors in Salento and Combeima, respectively.