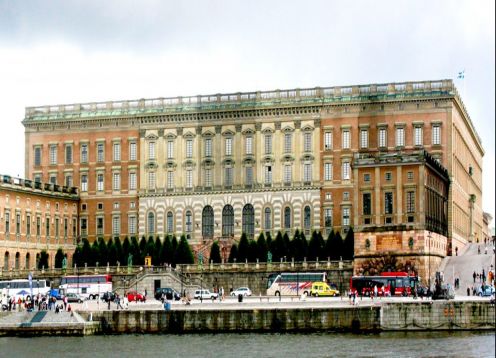 Stockholm at a Glance Bike Tour

The Royal Palace in Stockholm (or Slottet, in Swedish) is the main representative building of the Swedish monarchy. It is located in the Slottsbacken area, in Gamla Stan, and has more than 600 rooms.

The first building that was in this place was a fortress with a central tower built in the 13th century by Birger Jarl to defend Lake M?lar. The fortress grew into a palace, called Tre Kronor ("Three Crowns") in honor of the spiers of the central tower.

At the end of the 16th century, many works were done to transform the old fortress into a Renaissance-style palace under the reign of King John III. In 1690, it was decided to rebuild the palace in baroque style following a design by Nicodemus Tessin the Younger. In 1692, work began in the northern area. It was completed in 1697, but much of the palace collapsed due to a fire on May 7, 1697.

The current palace was built by Nicodemus Tessin the Younger just after the fire, with semicircle-shaped wings around the western courtyard completed in 1734, the palace church completed in the 1740s, and the exterior completed in 1754. The royal family He moved to the palace where the construction works of the southwest, southeast, and northwest wings had already been completed. The northwest wing was completed in 1760. In the north, the Lejonbacken ("Batter of the lion") was built between 1824 and 1830. Its name comes from the lion-shaped sculptures there.