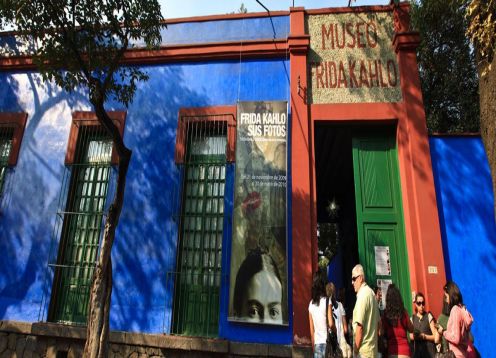 Teotihuacan and Basilica of Guadalupe

Located in one of the most beautiful and oldest neighborhoods in Mexico City, the Blue House was converted into a museum in 1958, four years after the painter's death. Today it is one of the busiest museums in the Mexican capital.

The so-called Casa Azul Frida Kahlo Museum is the place where personal objects reveal the intimate universe of the most recognized Latin American artist worldwide. In this house are some of the important works of the artist: Viva la Vida (1954), Frida and the C-section (1931), Portrait of my father Wilhem Kahlo (1952), among others.

Among the highlights of the house are the beds (day bed and night bed) that Frida used to paint while she was immobilized from the spine due to the terrible accident she had. Many of his paintings were inspired by this and the suffering he experienced after several reconstructive surgeries.

Another attraction of the museum is the study of Frida, where you can also appreciate its library. The kitchen of the house has been preserved in the same condition as when the painter used it. This is a very important element within the enclosure, since all the objects within it, such as vessels and plates, clearly reflect the impact that Mexican culture had on the artist's gastronomic lifestyle. Although at the time Frida and Diego lived, gas was already used in kitchens, Frida d to prepare meals in a more traditional way, with wood-based cooking. Likewise, the Mexican-style garden designed by Diego Rivera houses a pyramid in which his collection of pre-Hispanic pieces are exhibited.