You can know The Stone island in the following excursions 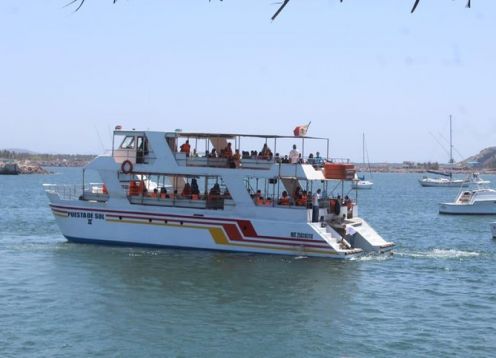 Don't miss this tour, you are in Mazatlan. Enjoy the famous playas of Stone Island. Don't forget to bring your camera for photos and remember that there are 2 play activi ...
from US$ 47

The stone island is one of the tourist attractions of Mazatlan, as it has quiet beaches and you can do water sports.

The Stone Island has not always been a place that only offers rest to the visitor who daily goes to enjoy its beaches, because before its economy was focused on another sector.

The locals remember that the settlement was born as an ejido, so its inhabitants were mostly engaged in agriculture, which was considered the main source of employment.

The sowing of tomato and other vegetables, were the fruits that were produced in that place periodically and that were subsequently sold in the port of Mazatlan

How to get to Stone Island
Arrive by panga or boat: To arrive by sea you can do it on a tour or crossing in one of the 2 piers that function as water taxis that take you for a few dollars and return you to Mazatlan.
The Embarcadero of the island of the stone is in the street Emilio Barrag?n corner with Miguel hidalgo.
The other jetty is near the tip, before arriving at the place where the ferry is

Arriving by Car: To get to Isla de la Piedra by car you have to take the Mexico 15 road and follow the signs that take you to the airport less than a kilometer before arriving at Mazatlan International Airport