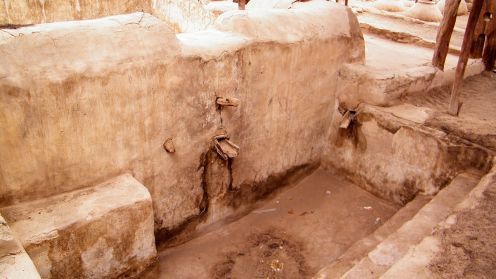 Matilla is located next to the Quebrada de Quisma the eastern margin of the Pampa Tamarugal. The waters of the nearby estuary have allowed the existence of a true haven, making possible the settlement of the place and the cultivation of various products, including grapes, since the early eighteenth century.

From the late eighteenth century the original church dates back to the resort, which was destroyed by an earthquake in 1878. On the foundation of the old building was erected the present church stands, built with the technique of partition of reeds, plastered with lime and chalk. It works by Spanish builder Jose Duran. In plant cruise on it stands a dome and lantern, classic design. Feature construction is the barrel vault above it. The facade is of neoclassic style, makes use of the arch in the doorway of access and the two side windows, the top layer is topped by a triangular pediment.

The solid tower that rises from the body of the church, as in many of the colonial churches of Tarapaca "is the original temple. It has the capacity to hold eight bells. In a square and two bodies, was built with small blocks of limestone, chalk and borax.

The interior of the church noted for its altarpiece Matilla masonry, which is supposed to be original old church, which presents a composition of great beauty.