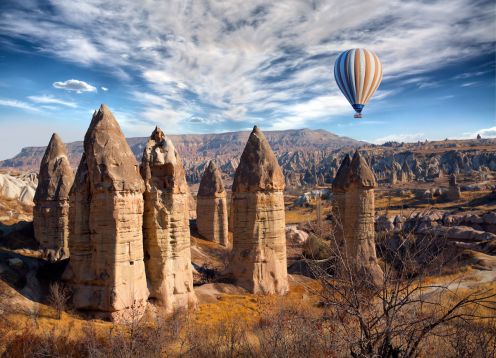 You can know Cappadocia in the following excursions

Explore South Cappadocia with a full day guided tour including lunch. Discover the area famous for its moon- rock formations, fairy chimneys and ancient underground settl ...
from US$ 71

Cappadocia is a historical region of Central Anatolia, in Turkey, it is characterized by having a unique geological formation in the world and by its historical and cultural heritage.

History and training of Cappadocia:
60 million years ago the mountain chain of Taurus was formed in southern Anatolia, at the same time that the Alpine chain was formed in Europe. The formation of the mountain range of the Taurus Mountains caused numerous ravines and depressions in central Anatolia. During the centenaries the wind and the rain have done magic in the rocks and have created spectacular conical formations. the famous fairy chimneys are today responsible for creating this majestic lunatic landscape.

However, Cappadocia is more than a supernatural landscape. Civilizations have also left their mark in the region. It was the Hittites who dug caves used as houses, warehouses, churches, in short an entire underground city. To this day, the conical caves are inhabited and the warehouses used to store grapes, lemons, potatoes and bread for when winter comes.

The first inhabitants of the area were the first Christians, they dug thousands of churches, chapels and monasteries in their underground cities. These churches were decorated with paintings of medieval saints and although they have lost the vividness of the colors through time, they can still be seen on the walls. Today, these images are still the reason many tourists visit Cappadocia.