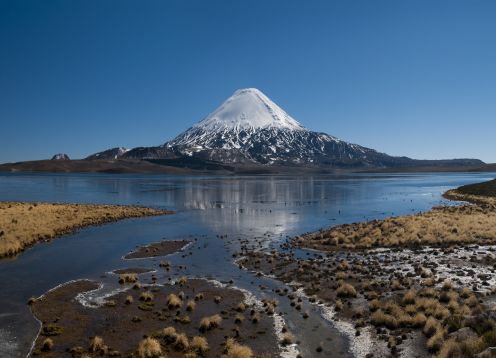 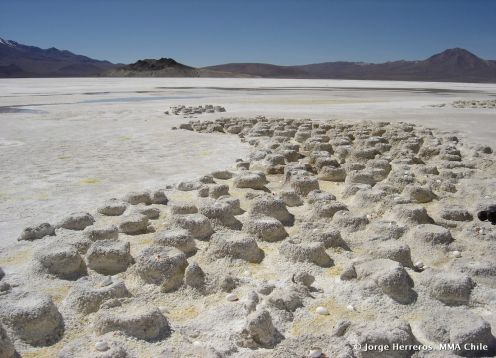 You can know Lauca National Park in the following excursions The excursion starts along the international road to Bolivia and across the Valley of LLuta. Picturesque settlements of archaeological interest will be visited : LLuta´s ...

The Lauca National Park covers an area of ??137,883 hectares and is located in the commune of Putre, Province of Parinacota. It includes the foothills and the high plateau of the northeast end of the Tarapac? Region

It presents rain in summer and snow in winter; the climate is dry with 280 m. of annual average precipitation and an average temperature that oscillates between 12 and 20 ? C during the day and -3 to -10 ? C at night.

How to get to the Lauca National Park:
The main access to the Lauca National Park is the International Highway CH-11, which connects the towns of Arica and Tambo Quemado. It crosses the park through the center and consists of two paved roads of excellent quality and passable all year round.
Other secondary access roads are: in the north central part, the Visviri-Parinacota Route; on the Southwest Route A-231, through the port of Chapiqui?a; and on the South Route A-235, which allows access from the Las Vicu?as National Reserve. All these roads correspond to dirt roads of regular quality, but passable throughout the year. During January and February, four-wheel drive vehicles must be used to access the A-235 route, which connects the Park in the Las Vicu?as National Reserve and the rest of the existing Protected Wildlife areas to the south of the high plateau.

Flora and fauna:
Even when the unit has many more plant species than those indicated below, these are the most representative. Chachacoma, Llareta, Paja brava, Que?oa, Tola, Que?oa de altura

Birds and mammals are, without a doubt, one of the most outstanding resources of this park, due to its quantity, diversity and ease of observation. Birds are represented by more than 60 different species.
Among the most typical species are: guanaco (Lama guanicoe), vicuna (Vicugna vicugna), llama (Lama glama), taruca (Hippocamelus antisensis), puma (Puma concolor), fox (Pseudalopex culpaeus) and vizcacha (Lagidium viscacia cuvieri). Among the birds: ?and? or suri (Rhea pennata tarapacensis), partridge of the puna or kiula (Tinamotis pentlandii), Chilean flamingo (Phoenicopterus chilensis), large parina (Phoenicoparrus andinus) and small parina (Phoenicopterus jamesi).

Ranger Office:
The National Park has, in addition to the Administration in Parinacota, with: the Las Cuevas nursery at 5 km. from the main entrance of the Unit, in the sector of the same name and on the banks of the Arica-Tambo Quemado road (CH-11); and the Chungar? nursery, located on the shores of Lake Chungar?. It also has a guest house located in the town of Putre.