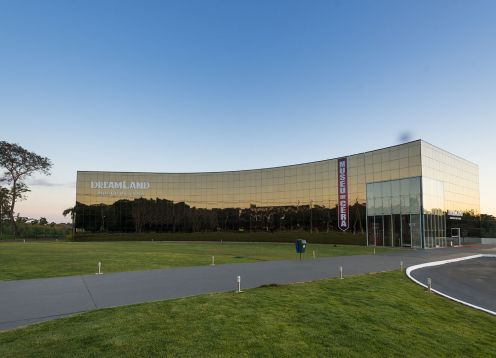 Foz do Iguazu Small-Group Brazil Side and Boat Tour

Foz do Iguacu to Argentine Iguassu Falls with Gran Aventura

Argentinian Side of the Falls

.su Gini coefficient, which measures the desigualad in the distribution of income, is 0.45, a result better than the national average (0.56) and the State of Paraná (0.49).

It has a privileged location, as it is in the triple border of Brazil with Argentina and Paraguay, in the geographic center of Mercosur.Por the strategic position it occupies, leads a new metropolis regional.En within 170 kilometers from Foz do Iguacu including the three countries, now they live about 2 million habitantes.De these, 1 million and 200 thousand living in the Western region of Paraná.De thus established itself as an important destination issuer domestic and international tourists.

Recognized as an international tourist destination by harboring one of the new seven wonders of nature, the Iguazu Falls, and the worlds largest power generation, Itaipu Binacional hydroelectric plant the city stands out as the second destination in the preference of foreign tourists visiting Brazil, according to a survey Embratur.También is considered one of the five Brazilian cities that receive more tourist national and international events, according to the International Congress and Convention Association - ICCA

Foz do Iguacu is also in first place among non-capital cities in the Study of Competitiveness of the 65 destinations inducers Regional Tourism Development by the Getulio Vargas Foundation for the Ministry of Tourism -. Mtur

The city has one of the six largest hotel park in Brazil, with more than 23,000 acomodaciones.Y is also one of the best infrastructures in the country to perform eventos.Sus convention centers are able to get together to 40mil people simultaneously.

In the seventeenth and eighteenth centuries it is housed where the current Foz do Iguacu hispanojesuítica hosted the town of Santa María del Iguazu; Portuguese and Brazilian bandeirantes destroyed; then newly founded in 1914 Brazil as a strategic point in this city today.

The name of the city (which means Boca Falls), founded in 1914, was originally Foz do Iguassu, which was changed to the current name, Foz do Iguaçu, in 1945 due to an agreement between the academies of Letters Lisbon and Brazil, going to use the "c" with cedilla. In 2005, the city was interest of the national press following a controversy, when the City Council created a bill that changed the official name of the city of Foz do Iguassu. The main argument was that the "C" (cedilla) caused disorders and uncomfortable situations for the understanding of many tourists who visit the city every year. The two "ss" would then be a way to "universalize" the name of the city, rescuing the original place names, which was changed in the early twentieth century.