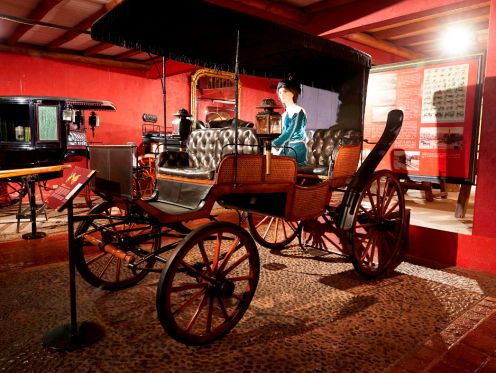 Chile is a country of particular geography, which makes it very easy to navigate. It is a narrow strip, which runs from north to south and is bounded on the east by the high peaks of the Andes and west by the Pacific Ocean. Another low mountain range, the Cordillera de la Costa, also runs north to south separating the coast of the intermediate region.

The Colchagua Valley is located in what is called the Central Zone of Chile, in Region VI (of the 13 that divides the country). It is a "cross-valley", ie, a valley formed by a river (Tinguiririca in this case) that runs from the Andes Mountains to the west, ending in the Pacific Ocean. The distance between the Pacific Ocean and the Andes Mountains through the Colchagua Valley is 120 km, creating a unique condition that creates a very special and particularly suitable for the cultivation of vines.

This valley is delimited to the north Cachapoal province, west to the Pacific Ocean on the east by the Andes Mountains and south of Curico province, ranging between 34 Âº 15 and 34 Âº 50 south latitude and 72 Âº 00 and 70 Âº 15 West longitude.

In practice, you enter the Valley on the north, about the Km 130, Highway 5 South (Los Lingues) and the South at Km 159 (Chimbarongo).


In 1995, the State of Chile enacts law Wine and Zoning Designation of Origin, through Decree No. 464, for wines produced in the country.

This decree, among other provisions, stipulates in article 1, four major wine regions of the country, Atacama, Coquimbo, Valle Central, and South, each of which are divided inside, into sub-regions, zones and areas.

The area and Designation of Origin and / or Appellate Colchagua Valley, is limited to the Central Valley Region, Sub-region Rapel.

Inside the Colchagua Valley area, establishes the wine areas of San Fernando, Chimbarongo, Nancagua, Santa Cruz, Palmilla, Peralillo, which, in most cases correspond to the communes of the same name, except of Nancagua that includes the municipality of Santa Cruz Placilla and that includes the town of ChÃ©pica.

Later in the year 2002, introduced an amendment to this law, which includes two new areas to the Colchagua Valley wine, corresponding to areas of Lolol and Marchig. All of the above areas are confined to their community boundaries.

In its article 3, the law provides that wines with Designation of Origin, may use or mention on their labels, and Valles regions or areas, only if they fulfill the condition that at least 75 percent of the wine has been produced with grapes from the geographical place indicated. This article also defines the grape vines that can be used in producing these wines.

In article 4, the law states that in cases in the label mentions the grape variety or wine it contains, this must be present at least 75 percent of the mixture.

Beginning in the year 2001, the Agricultural and Livestock Service, SAG, governmental body, begins with the implementation, enforcement and effective oversight of this law.


The Colchagua Valley boasts clear skies and transparent, without the influence of Smog, which generate large urban centers.

On the coast this variation is smaller, with more moderate temperatures even in summer.
Rainfall is concentrated mainly from June to September, with an average total rainfall of 600 mm.