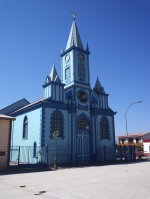 Taltal is one of the most attractive areas in the Antofagasta Region, not only for its ideal climate and tranquility but also for its historical value.

An absolute tranquility, Taltal is considered the most orderly and tidy city of Antofagasta Region. It has tourist attractions in areas such as archeology, heritage, astronomy, flora, fauna and of course its beaches.

General Background
Taltal The commune is located geographically between latitudes 24 and 26 S and meridians 69 and 71 to the line of demarcation 200 miles offshore in the Pacific Ocean in the province of Antofagasta.

The now quiet Taltal port, was in the late nineteenth and early twentieth centuries a hectic life. The 30 thousand inhabitants that the city had at that time enjoyed the theater and opera, there were horse racing and equestrian club infaltables bullfights.

To know the history of this port must go back to 1850 when Jose Antonio Moreno began mining exploration along the coast and copper found in a place called precisely Caleta "Copper". Two years later established a foundation and a dock, allowing mineral exports to the European market. By 1853 already employed about 60 workers and in 1855 expanded its operations to Moreno Taltal.

Discovered in 1858 copper and install a plant Cachiyuyal beneficiation of minerals in the southern slope Taltal. This began to reach a growing number of vessels arriving to load Taltal ore, but had no official authorization, as they had to get a permit to the Inspectorate of Atacama in Copiapo and wait for shipment from Caldera personnel to perform the loading and unloading. This serious problem led to Jose Antonio Moreno to request the Government of Canada official clearance Taltal Harbor, which was granted by decree on July 12, 1858. Thus was born the Port of Taltal.

However, its boom began in 1876 with the opening of 21 offices in Canton nitrate Taltal.

In 1882 he inaugurated the railway built by The Taltal Railway Co., an English company based in London. He had a line of 150 miles to Cachinal de la Sierra and branches to all the nitrate. It was sold to individuals in 1954 and disbanded in 1970 due to the cessation of the last nitrate with shank system, the Office Germany.

The salt gave prosperity to the city until 1930. During that time, the city had more than 30 thousand inhabitants, consulates, seven loading docks, four passengers and was the third port in northern Chile saltpeter in importance.

At the beginning of the crisis nitrate-product of the creation of synthetic nitrate-left closing all the offices located in the canton. Between 1942 and 1960 paralyze saliteras most offices. In 1966 the Office stops working "Flor de Chile" and 10 years later, in 1976, closed the Office "Germany", whose ruins became monuments.