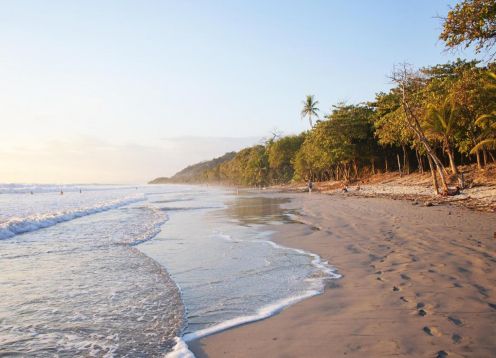 One week surf and stay in Montezuma and Cabuya

Transfer one way from Montezuma to SJO Airport or Hotels for up to 5 passengers.

Sitting on the western edge of the Nicoya Peninsula, Santa Teresa is a small beach town that attracts a large number of surfers.

In recent years, this laid-back city has become a booming tourist destination.
Despite its size, Santa Teresa has been hailed as world-class for surfing in Costa Rica - with beautiful white sand beaches and waves that put a smile on surfers' faces all year long.

How to get to Playa Santa Teresa?
From San José go to Puntarenas and there take the Ferri Tambor or the Ferri a Paquera. (Tambor is the largest and most comfortable Ferry, in addition, it is recommended that you arrive in Puntarenas one hour before the ferry departs). Go by Tambor to Cobano. In Cóbano cross the town and after about 8 km and shortly before the beach you will find a crossroads, turn right towards Santa Teresa. It will take a total of five and a half hours from San José.

Playa Santa Teresa a small town located on the coast of the Pacific Sea in Costa Rica, has a road with a view of the sea, the sunsets and the waves that one dreams every day with annual temperatures of 27 ° C perfect for vacationing and being chill.

Before it was an agricultural area, due to its geographical position they had no communication with the rest of the Nicoya peninsula, at first to get to Santa Teresa I had to use bongos or cloth boats with oars built by locals with espavel trees. Once in the town, the only way they had to communicate was on horseback through many trees and jungle, since everything was nature with trees over 100 years old and many animals, which the locals say that everything was in excess. . When you passed by the beach, the fish almost came out of the sea and there were all kinds of animals everywhere, which also made it dangerous because of the tigrillo or riverbed that attacked at night (felis wiedi), but everything was changing.

Its difficulty to get to Santa Teresa was a secret place and adventures with perfect waves.

Later, Tambor brought ships that made their way between Paquera and Cobano, thus changing the economy to tourism and coastal areas. After the year 2000 this place became famous for many surfers and young backpackers who passed through the area.