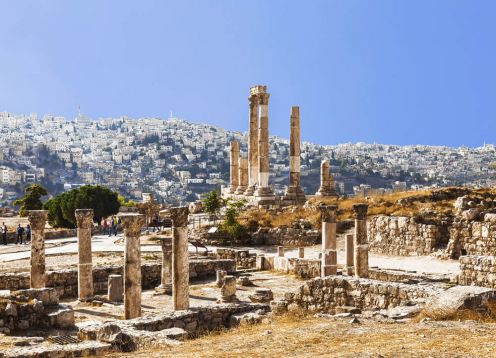 From amman to mount nebo and deadsea and back

Private Day Trip of Jerusalem and Bethlehem from Amman

Amman or Amman is the capital of the Hashemite Kingdom of Jordan as well as being the commercial, industrial and administrative center of the kingdom.
Its population is 4,007 526, with approximately 40 percent of the country's population being one of the most liberal and westernized Arab cities.

Haman's name derives from the name given by the Ammonites to the city Rabbath Ammon. Rabbath meant in Ammonite capital or base of the king, and gradually it was changing only to Amman.

Amman is in an area of valleys and was originally built on seven hills so the mountainous profiles are still very characteristic. It enjoys a semi-arid climate so even in spring the temperature touches 30 C. Summers are usually hot and winter begins When November ends. It is usually cold and it can even snow in some cold wave.

Of the various civilizations that have populated Amman, the first one that was registered did so in the Neolithic period, some 8500 years before our era. The archaeological discoveries of Ain Gazal, east of the city, also show evidence of the growth of artistic production, making it one of the most advanced of the time.

In the thirteenth century a. C., Amman was called Rabbath Ammôn by the Ammonites. It was conquered by the Assyrians, followed by the Persians, and later by the Greeks, who called it Philadelphia. In the 1st century BC C. Philadelphia fell under Roman control and was grouped into the Decapolis (a league of ten cities of Greco-Roman culture in the Middle East).

In 324, Christianity was imposed as an imperial religion and Philadelphia became an episcopal seat.

Its current name comes from the time of the Gasanid kingdom, a Christian Arab kingdom, an ally of Byzantium. After the Muslim expansion, Haman flourished under the Umayyads and the Abbasids. Then he suffered earthquakes and various disasters.

In 1921 King Abdullah I of Jordan made it the seat of his new government and later capital of the kingdom.

Amman remained a small city until 1948. Since then, the population has been growing steadily as a result of the influx of Palestinian refugees. Residential areas have been expanding towards the surrounding hills.