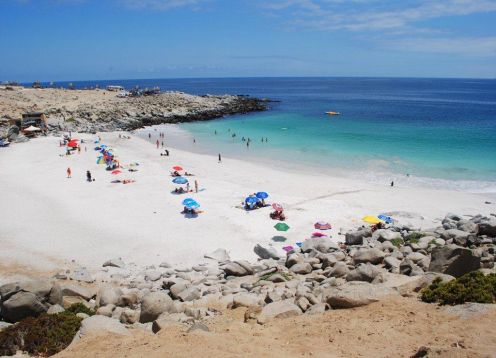 Bahia Inglesa is located at 880 kilometers from Santiago and just 6 miles south of Caldera, offers visitors beaches with clear waters, emerald green, small waves and white sand.
Lately Bahia Inglesa is the main alternative to spend the summer holidays of the Chileans.

Bahia Inglesa was discovered in 1687 by the English pirate Edward Davis, and was popularized by English immigrants who arrived in Atacama attracted by the riches of silver and gold back in the nineteenth century, when many deposits were mined in the area and when Caldera was born as a port of export. Named for the many English families that made the waters for recreation, English Bay was gradually becoming the most popular spa de Atacama.