Train to the Clouds Experience 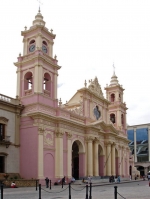 Salta, is one of the 23 provinces that make up the Argentine Republic. It has around 1.5 million inhabitants and the most populated area of the province is the Lerma Valley, where the city of Salta is located.

Its capital is the homonymous Salta. It is located in the northwest of the country, N.O.A. , bordering to the north with Jujuy and Bolivia until the trifinio Hito Esmeralda, where it begins its border with Paraguay (towards the northeast), to the east with Formosa and Chaco, to the south with Santiago del Estero, Tucumán and Catamarca, and to the west with Chile. With 155 488 km² it is the sixth largest province, behind Buenos Aires, Santa Cruz, Chubut, Rio Negro and Córdoba.

The purpose of occupying and founding cities in the territory of the then Gobernación del Tucumán, was to provide protection to the riches of the silver mines of Potosí, consolidate a communication system between them, facilitate the transit of documentation and merchandise, thus creating a solid commercial system.
Sent by Viceroy Toledo, it was Hernando de Lerma who managed to establish what would be the City of San Felipe del Valle de Lerma. The name of the city derived, with the passage of time, in Salta.