Queenstown to Milford Sound Coach and Cruise with Buffet Lunch

You can know Fiordland National Park in the following excursions 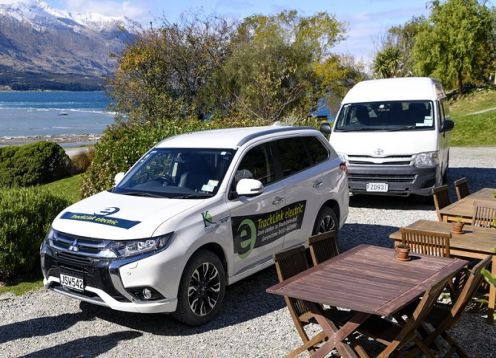 Routeburn by electric vehicle between Kinloch Lodge and Routeburn, where we will see the Dart River and the valley on a 19 km trip from the comfort of our electric miniva ...

The Fiordland National Park is composed of 14 fjords and is in the Southeast of Nueva Zelanda. It is Heritage of Humanity by UNESCO since 1990.

The Park has a surface area of 12,500 square kilometers, and is the largest of Nueva Zelanda National Parks.
The landscape of the park is composed especially by fjords, which formed during the ice ages. The most famous of them is the Milford Sound, also called Piopiotahi, for his name in Maori.

Fiordland National Park Flora and Fauna:
In this park we can find several species such as dolphins, seals, ratones, conejo and ciervos.
Among the birds, we can highlight the kakapo, which is the only volcano in the world. We can also find the Kiwi, which is native to this country.

How to get to Fiordland National Park:
Air access
There are airports in Te Anau, Manapouri and Milford Sound, offering some commercial flights and private services.

Road access
Te Anau is considered the gateway to Fiordland and can be reached by SH6 and SH94 from Queenstown or SH1 and SH94 from Invercargill.
Regular bus services are available from these centres.