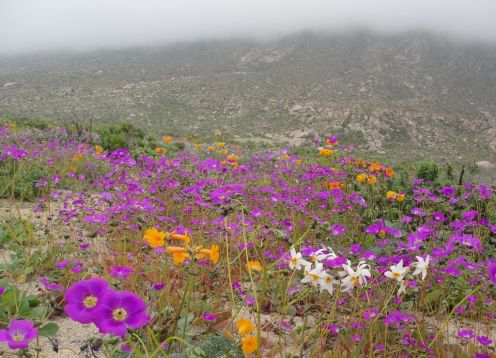 The Llanos de Challe National Park is located in the coastal sector of the Atacama Region, in the province and commune of Huasco, and its surface area is 45,708 hectares.

How to get to the Llanos del Challe National Park:
To access the place there are two alternative routes, the main one has its origin in km. 668 of route 5 North, approximately 17 km. to the north of Vallenar, following the secondary road C-440 that goes through the mineral of Los Colorados and the town of Canto de Agua until arriving at Carrizal Bajo. The other access road is the C-470 road that joins the towns of Huasco Bajo and Carrizal Bajo along the coast.

Excursion Trails:
Los Pozos-Cerro Negro nursery: On foot and in the company of a park ranger (3 km round trip), it allows environmental interpretation, the recognition of flora and fauna and the contemplation of beautiful landscapes. In the coastal plain it is possible to appreciate the cactus (Coipapoa carrizalensis and the formation of camanchaca in the foothills of Cerro Negro.

Administration-Llanos de Challe Nursery: Self-guided and in vehicle, allows the observation and recognition of flora and fauna, among which guanaco herds in their natural habitat stand out.

Foundry-Quebrada Minillas: On foot or in a 4x4 vehicle, preferably self-guided or accompanied by park rangers (16 km round trip), allows for environmental interpretation, observation and recognition of flora and fauna and historical remains of mining and the contemplation of beautiful landscapes.

Quebrada Algodones: Self-guided and in 4x4 vehicles, allows observation and recognition of flora and fauna. They also highlight the vestiges of gold mining and the contemplation of beautiful landscapes.

Quebrada El Mono: On foot, self-guided or in the company of a park ranger (10 km round trip), allows environmental interpretation, observation and recognition of flora and fauna, and the observation of historical vestiges of mining.