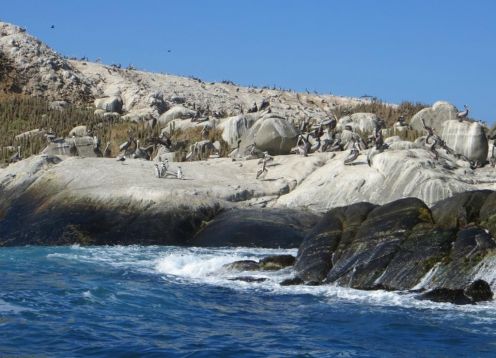 The natural monument Isla Cachagua also called Isla de los Pingüinos is an Islet in front of the Cachagua spa.

The natural monument Isla Cachagua is located in the Valparaíso Region and belongs to the province of Petorca, municipality of Zapallar. It was created on June 27, 1989. Previously, in 1979, it was declared a Nature Sanctuary.

It is located in the northern part of the beach, there is a small enclave of 5 hectares, separated by an arm of 100 meters wide sea which is a paradise for seabirds. It inhabits two special varieties of penguins (Humboldt and Magellanic), which are unique in this part of the Chilean coast, as well as large pelicans (Pelecanus thagus), other varieties such as ducks (Phalacrocorax olivaceus) and gulls (Larus dominicanus). , also accompanied by an abundant population of sea otters or chunchungos. This scenario was declared by its undoubted beauty nature sanctuary.

It is one of the five most important nesting sites of the Humboldt penguin, it covers 5 of its population in the country and 3 of the world population. In Chile, its state of conservation is vulnerable.

Because it is a protected place, it is not allowed to disembark in it.