Tours in The Hague

Guided Private Tour to Keukenhof from Amsterdam, The Hague - 7 Hours

Discover The Hague with this Fun & Interactive City Game

Self-guided Outside Escape Walking Tour in The Hague City Centre

Surfing, Skateboarding and Paddleboarding in The Hague

Keukenhof Guided Tour plus Visit to Madurodam from The Hague 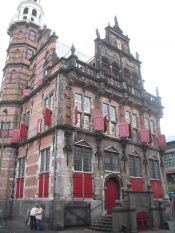 Information about The Hague

The Hague is one of the most important cities in Europe, as it is the headquarters of numerous international organizations. Additionally, The Hague is the administrative capital of the Netherlands and is located 60 kilometers southwest of Amsterdam.

The Hague is a small city of around 500,000 inhabitants, but it is still the third largest city in the Netherlands.

History of The Hague

The Hague was originally a hunting ground for the Dukes of Holland. It became the heart of the court's life after William of Holland built a castle here in 1248.

At the end of the 16th century, the city emerged as a Flemish capital during the uprising of the Netherlands against Spain. Between 1795 and 1813, it was held by France, and once again became the center of courtly life, when in 1815 the Kingdom of the Netherlands was established, which included present-day Belgium until 1830.

The peace conferences held in the city in 1899 and 1907 (see The Hague Conferences) increased the city's long tradition as an international diplomatic and judicial center, and led to the establishment of the UN International Court of Justice or Permanent Court of Arbitration. Since the early 1970s, attempts have been made to move some of its governmental functions to other provinces of the country.