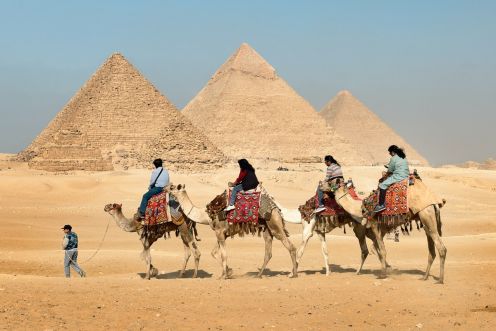 Cairo is the capital of Egypt and its governorate, it is the largest city in the Arab world, in the Middle East and in Africa.
It was founded in the year 116 AD. C., in what is now known as Old Cairo, when the Romans rebuilt an ancient Persian fortress along the Nile River. Before its foundation, Memphis or other cities were the capital of the Pharaonic empire. The current name is due to the Fatimids, who baptized the city with the name, Al-Qahira. After various invasions such as the Mamluks, Ottomans, Napoleon and the British, Cairo became sovereign capital in 1952.

What to see in Cairo
The best known monuments in Cairo are the famous Pyramids of Giza and the Sphinx, although it is also possible to make other visits of great interest such as the Egyptian Museum, the pyramids of Saqqara and Memphis and the ancient fortification of the Citadel.
Once in the heart of the city, imposing temples such as the Sultan Hasan Mosque, the Ibn Tulun Mosque and the Al Rifai Mosque stand out.
To immerse yourself in the atmosphere of the city, nothing better than getting lost among the shops of the Khan El Khalili Market to get some bargain, in addition to enjoying the delicious typical Egyptian dishes in a traditional restaurant