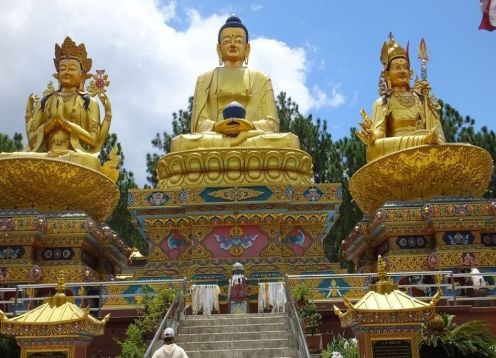 Landing Everest Base Camp by Helicopter flight tour from Kathmandu

Landing Everest base camp by Helicopter

Swayambhunath or Temple of the Apes, is an ancient religious temple that is a world heritage site that is atop a hill in the Kathmandu Valley.

The place is also known as the temple of the monkeys since there are monkeys, considered sacred, that live in areas of the northwest part of the temple.

The Tibetan name of the place means "sublime trees" due to the wide variety of trees on this hill. For Newars Buddhists, Swayambhunath occupies a central position and is probably the most sacred place among Buddhist pilgrimage sites. The place is also revered by the Hinduists.

The Swayambhunath complex consists of a stupa, a variety of shrines and temples, some dating from the Licchavi period. A Tibetan monastery, museum and library are more recent additions. The stupa has Buddha's eyes and eyebrows painted. Among them, there is something that looks a nose paint (but it is Nepal's symbol of "unity", in the main dialect of the Nepalese language). There are also shops, restaurants and hostels. The site has two access points: a long staircase, which has 365 steps, which lead directly to the main platform of the temple, which is from the top of the hill to the east, and a car road around the leading south hill to the southwest entrance.