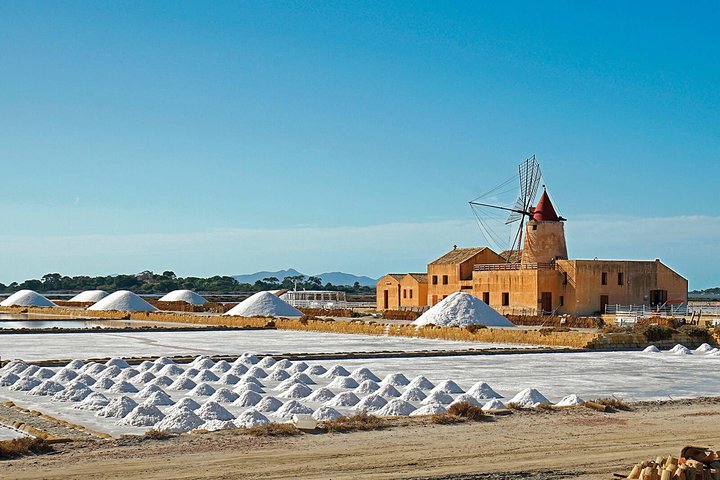 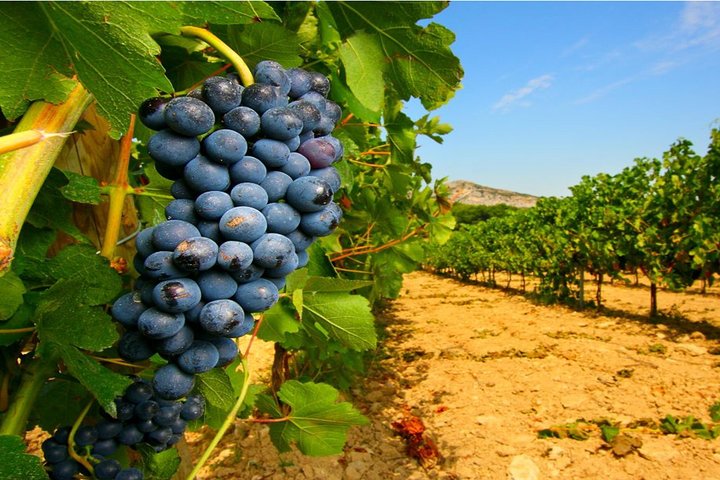 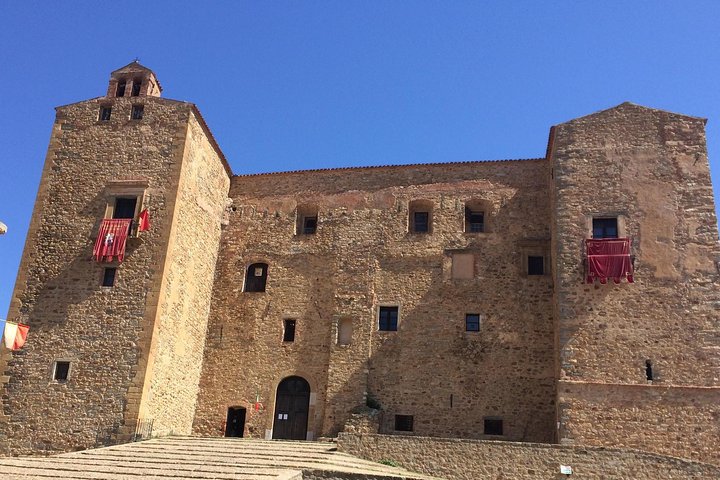 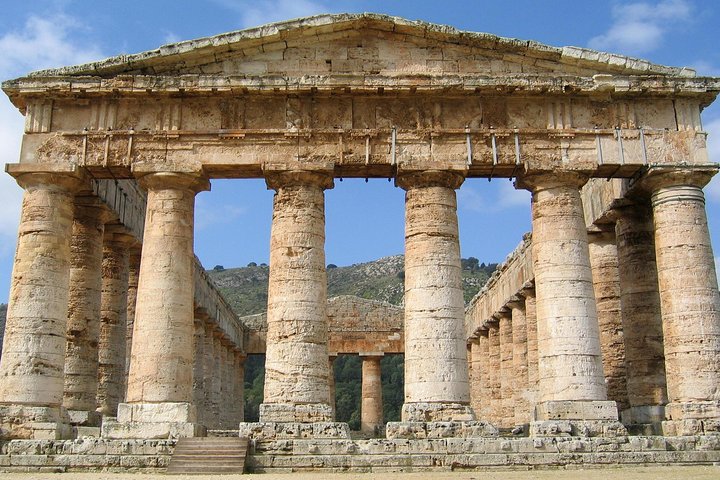 This tour aims to offer a complete experience for both your eyes and your palate. You will visit some of the most beautiful places, cities, villages in Western Sicily: rich in history, culture and art. Palermo, Monreale, Mondello, Erice, Segesta, Trapani, Cefalù, Castelbuono, The Saline with Their different colors. You will taste the typical Cannoli, the Marsala, the Almond sweets in Erice, the cheeses and the artisanal Salami in Castelbuono, the street food in Palermo, fish dishes in Trapani and the foods that made us famous in the world.
This is a private and exclusive tour, you will only be in the group, there will be no other people. We will be out of the normal tourist circuits, we will visit isolated, peaceful and safe places.

Day 1: The first day will be dedicated to the visit of the Capital Palermo, the historic center, Monreale, Mondello beach.

Stop At: Duomo di Monreale, Piazza Guglielmo II 1, 90046, Monreale, Sicily Italy
The Cathedral of Santa Maria Nuova is the main place of Catholic worship in Monreale, in the metropolitan city of Palermo, the archbishop's see of the Archdiocese of Palermo.

Built starting from 1174 at the behest of William II of Altavilla, king of Sicily from 1166 to 1189, it is famous for the rich Byzantine mosaics that decorate its interior.

In August 1926 Pope Pius XI elevated it to the dignity of a minor basilica.

From 3 July 2015 it is part of the World Heritage Site (UNESCO) within the Arab-Norman Route of Palermo, Cefalù and Monreale.
Duration: 1 hour

Stop At: Cattedrale di Palermo, Corso Vittorio Emanuele, 90040, Palermo, Sicily Italy
The primatial metropolitan cathedral of the Holy Virgin Mary the Assumption, known simply as the cathedral of Palermo, is the main place of Catholic worship in the city of Palermo and a bishop's seat of the homonymous archdiocese of the city
Duration: 30 minutes

Stop At: Teatro Massimo, Piazza Giuseppe Verdi, 90138, Palermo, Sicily Italy
The Teatro Massimo Vittorio Emanuele, better known as Teatro Massimo, of Palermo is the largest opera theater building in Italy, and one of the largest in Europe, third by architectural magnitude after the Opéra National de Paris and the Staatsoper of Vienna. Representative environments, halls, galleries and monumental staircases surround the theater itself, forming an architectural complex of grandiose proportions.
Duration: 30 minutes

Stop At: Quattro Canti, Corso Vittorio Emanuelle Via Maqueda, 90100, Palermo, Sicily Italy
I Quattro Canti, or piazza Villena, or Ottagono del Sole, or Teatro del Sole, is the name of an octagonal square at the intersection of the two main roads of Palermo: the Via Maqueda and the Cassaro, today Via Vittorio Emanuele (ancient street of Phoenician origin, connecting the acropolis and the Palazzo dei Normanni to the sea), about half of their length
Duration: 30 minutes

Stop At: Piazza Pretoria, Piazza, Palermo, Sicily Italy
The construction of the unusual garden, without a prominent building or building, and the monumental fountain were commissioned by Pedro Álvarez to the Florentine sculptor Francesco Camilliani, a pupil of Baccio Bandinelli, who worked there starting in 1554. The fountain included 48 statues and had unusual dimensions, not being destined to a public space, and it was faced by a long pergola formed by 90 wooden columns put in place under the supervision of Bartolomeo Ammannati.
Duration: 30 minutes

Stop At: Spiaggia di Mondello, Viale Regina Elena, Mondello, Palermo, Sicily Italy
Mondello is a neighborhood and tourist area of ​​Palermo that is part of the VIII District, enclosed by Monte Pellegrino and Monte Gallo. Detached from the city by the Parco della Favorita, it can be reached by means of the many royal tree-lined avenues or by secondary links.

The area is renowned for its beach, which is one of the most coveted beaches in Sicily, for its numerous Art Nouveau villas, known as the best expression of Art Nouveau in Italy, and for sites of historical interest. It is home to the World Festival on the Beach. In this locality, in 1975 the Mondello Prize was born, a literary festival today organized by the Sicily Foundation together with the Turin International Book Fair.
Duration: 2 hours

Day 2: The second day you will be dedicated to the visit of Segesta temple, Erice medieval village, Salt Flats & Trapani

Stop At: Castello di Venere, Largo Castello, 91016, Erice, Sicily Italy
Erice, a unique medieval town located atop a mountain at 760 meters above sea level overlooking Trapani, a city full of churches, castles, watchtowers, narrow streets and breathtaking views of the Egadi Islands, Trapani and Monte Cofano. In Erice you can also taste the typical almond sweets of local production as well as delicious wines famous all over the world.
Duration: 2 hours

Stop At: Bastione Conca Trapani, Via Mura di Tramontana Ovest, 91100, Trapani, Sicily Italy
Trapani is a city in western Sicily with a crescent-shaped coast. In the western tip, with a view of the Egadi Islands, is the 17th century Torre di Ligny watchtower, which houses the Museum of Prehistory and Marine Archeology. North of the port, the Church of the Purgatory preserves wooden sculptures that parade through the city during the Procession of the Mysteries at Easter
Duration: 1 hour

Day 3: On the third day will be dedicated to the visit of Castelbuono Castle & Medieval Village, and Cefalù center & beach

Stop At: Castello dei Ventimiglia, Piazza Castello, Castelbuono, Sicily Italy
Following the 1997 restoration, the structures of a previous building emerged from the Ventimiglia castle, built in 1317 by Count Francesco I Ventimiglia. The current building is the result of numerous renovations, which make it difficult to reconstruct its original appearance. A simple quadrangular plan, it shows on the outside a mixture of styles that in that period influenced all Sicilian architecture. The cube volume recalls the Arab style; the square corner towers echo the Norman one; the round tower refers instead to the Swabian military constructions. In the earthquake of the early nineteenth century the battlements disappeared, of the Ghibelline form, swallowtail, and also city walls, towers and arches, now in ruins. Some defensive structures of the XIII century and some rooms of the XIV century have remained intact.

Stop At: Castelbuono Paese in Provincia Di Palermo, Localita Da Visitare, 90013 Castelbuono, Sicily Italy
Castelbuono beautiful medieval village nestled in the Madonie park rich in history and traditions where you will visit the Castle of Ventimiglia rich in history and legends that houses inside a precious relic of St. Anna the Mother of Mary in addition to numerous other treasures.

The visit will continue through the streets of the quaint Old Town, we will visit the Church of the Maria, we will also make a tasting of typical sweets, Panettoni, torroni, Cannoli Siciliani produced by a famous artisan pastry world famous "Fiasconaro".

After the visit you will decide whether to have lunch at Castelbuono if you prefer a traditional rustic cuisine based on meat, cheese, salami, wild boar
Duration: 1 hour

Stop At: Duomo di Cefalu, Piazza Duomo, 10, 90015, Cefalu, Sicily Italy
The cathedral of Cefalù, the name with which the Basilica of the Transfiguration is known, is a minor basilica [1] located in Cefalù, in the metropolitan city of Palermo, and cathedral of the diocese of the same name.

According to legend, it would have arisen following the vote to the Most Holy Savior by Roger II, who survived a storm and landed on the town's beaches. [2] The real motivation seems rather of a political-military nature, given its character as a fortress.

The construction events were complex and were finally completed in the Swabian age. An ambulatory created in the thickness of the wall and the same covering, consisting of three roofs, of different epochs and construction techniques, testify to the changes that occurred in the project. The monument has a Romanesque style with Byzantine features.
Duration: 30 minutes

Stop At: Lavatoio Medievale, Via Vittorio Emanuele, 90015, Cefalu, Sicily Italy
Stairway in lava stone that leads to a wash-house where in the Middle Ages it conveyed the water of a river.
Duration: 10 minutes

Stop At: Cefalu Coast, Cefalu, Sicily Italy
Cefalù (Ras Melkart in Phoenician, Κεφαλοίδιον in Greek, Cephaloedium in Latin, Gafludi in Arabic, Cifalù in Sicilian is an Italian town of 14,323 [2] inhabitants of the metropolitan city of Palermo in Sicily.

It is located on the northern Sicilian coast, about 70 km from Palermo, at the foot of a rocky promontory. It is one of the major seaside resorts in the entire region; despite its size, every year it attracts a significant flow of local, national and foreign tourists who, in the summer period, triple the population, making the main squares and the most important streets of the country crowded.

The town, which is part of the Parco delle Madonie, is included in the club of the most beautiful villages in Italy, the association of small Italian towns that stand out for their great artistic, cultural and historical importance, for the harmony of the fabric urban, livability and services to citizens. Cefalù is also part of the network of solidarity municipalities.
Duration: 3 hours

Informacion Adicional
"Confirmation will be received within 48 hours of booking, subject to availability"
"Not wheelchair accessible"
"Most travelers can participate"
"This is a private tour/activity. Only your group will participate"
"Hand sanitizer available to travelers and staff"
"Social distancing enforced throughout experience"
"Regularly sanitized high-traffic areas"
"Transportation vehicles regularly sanitized"
"Guides required to regularly wash hands"
"Regular temperature checks for staff"
"COVID-19 vaccination required for guides"
"We only do private tours for your group, or family. All ours Drivers are fully Vaccinated, we make sanitization of the vehicles after each service, we give sanitizing gel to wash the hands, we have a transparent dividing barrier between the driver and pax. we apply all applicable safety regulations"

Start Time: 8:30 AM
Duration: 3 Days
Start location: Traveler pickup is offered
We offer pick up and drop off to all hotels, b & bs, holiday homes, ports and accommodations in Palermo, for other special requests ask at the time of booking if pick up is available for the desired location