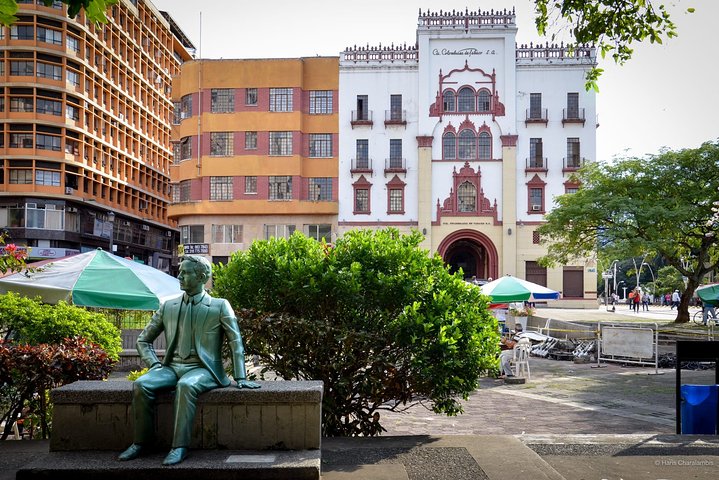 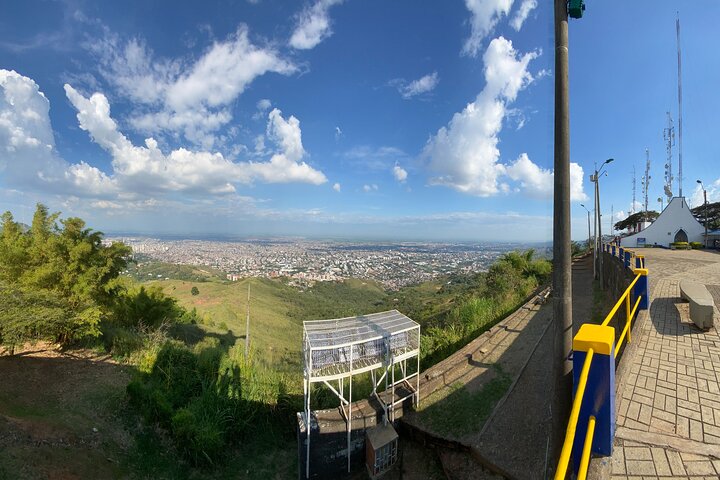 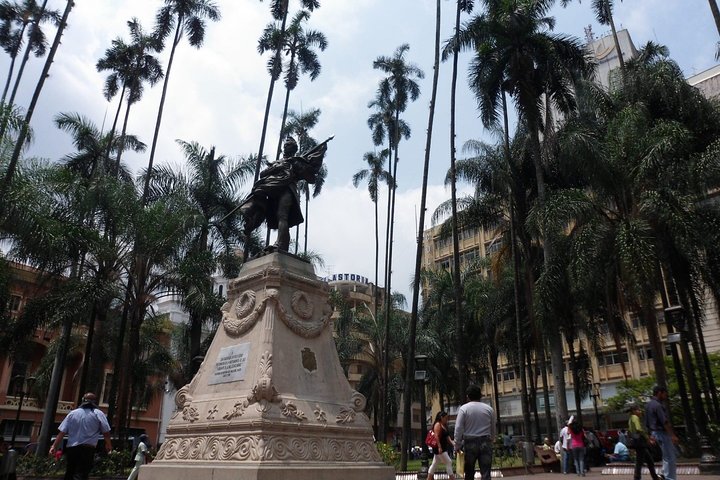 We will visit a great number of atractives while we walk along the historic area of the city. We will be doing a great exercise walking almost for three hours and at the end we'll take a transport to Cristo Rey and come back to finish at the Gato de Tejada monument.

Until August 8, 2012, it would be called the plaza of the caleñidad. Unfortunately that day the master Jairo Varela founder, musician and composer of the Niche group passed away. In his honor, the mayor of that time, together with the Cali council, decided to change the name to the Jairo Varela square.
The plaza has a sound sculpture in homage to the wind instruments used by the Niche group, such as trombones and trumpets. It measures 24 meters long by 11 meters high, weighs 4 tons.

The Ortiz Bridge is the most important civil work of the city as it represents different stages in its urban development and together with Paseo Bolívar and the Cali River it constitutes the vital part of the citizen image. At the beginning of the 20th century, the bridge structures the main axis of the city; the twelfth street where the main commercial and exchange activities were developed.

Since the foundation of the city, it has been the epicenter of public, commercial and political life. During the colonial period it was called Plaza Mayor and it was the meeting point of the colonial village, later it was called Plaza de la Constitución until 1913 when the name was changed to Plaza de Caicedo, as a posthumous tribute to the hero from Cali JOAQUIN DE CAYZEDO Y CUERO, a protomartyr of independence and who was shot in the city of Pasto on January 25, 1813, was how a monument in his name was installed in the center of the square.

Plazoleta de la Gobernación It is the meeting place for public, civic, cultural and political life where different cultural events are held. Its name is: Plazoleta Cívica de Cali, adorned by a water fountain built in 1970 and a monument that honors the reverend father: Fray Damián González; It is also known as Plazoleta de San Francisco. The old building was destroyed in 1960, replacing it with the current modern construction of the Valle del Cauca governorate, inaugurated in 1969.

It is a building belonging to the architectural trend started in the 19th century of Creole classicism. In its construction the model of the Italian opera house was followed, with its respective neoclassical adaptations. It was the first construction to display decorative arts, it retains its original curtain made by G. Alessandrini from the Peyron house in Rome, as well as the imported seats from Austria, the curtains and the coffered ceilings commissioned from the Henry Lefol house in Paris.

This convent was inhabited by Mercedarian Monks until 1813, when it was the headquarters of General Mosquera's troops and later passed into the hands of the Augustinian Recoleta nuns, this complex is made up of the Chapels of the Virgen de las Mercedes and the Chapel of the Virgen de los Remedios, the Chapel of San Juan de Letrán, the Religious Convent and the Museum of Colonial and Religious Art La Merced. It was declared a National Monument in the month of February 1975.

San Antonio is famous for its architecture, especially for its houses. A typical house usually has one or two floors, with a hallway and a central or main patio with a river stone floor and a wooden pilaster nearby; a second patio adjoining the bathrooms and kitchen, and a large plot where it is not uncommon to find fruit trees. Its facades are thick-walled with wooden beams, the characteristic windows of the sector have wooden bars or iron, with four wings of which two, the highest, remain open; the main door is double and with a peephole.

On the hill is the chapel of San Antonio, which was built in 1747. Since then, the Caleña society has attended the Eucharist on Sundays and to celebrate the rites of the Catholic faith such as marriage.

he monument to the founder of the city, made in bronze, rises imposingly on the hill of the same name, the idea arose in the 1930s when the city was to be 400 years old. The work was entrusted to the Spanish sculptor Victorio Macho, who carried it out in Spain and later was transferred by boat to Buenaventura and from there to Cali on the back of a mule, to be later assembled and placed on a pedestal in the site it occupies today, raised his right hand pointing west as this is the exit to the sea; placed his left hand on his iron sword called "Tizona" on the pedestal is engraved with the coat of arms of Cali, its inauguration occurred on July 25, 1937, a year after the 400th birthday of the city.

Cristo Rey located 1474 meters above sea level in Cali. It can be reached by car. It is an excellent viewpoint towards the Sultana del Valle. The statue has a height of 26 meters, a pedestal of 5 meters, and a span of 21 meters. Christ the King was declared a National Monument. it is located on the hill of the crystals Corregimiento de los Andes, Vereda del Cabuyal; It is made of iron and concrete and was inaugurated and blessed to celebrate 50 years of peace after the Thousand Days War.

It is located in the old sector called "Charco del Burro", a place that was a natural spa of Los Caleños. The idea arose from the group called la tertulia, in the mid 50's that met periodically to discuss cultural issues and socially converse.
It is a modern construction, it makes a stylized sketch of the ancient Greek temples with a large colonnade that precedes them.

Monument to the river cat located on the left bank of the Cali River, Within the plans for the rescue of the Cali river and the embellishment of its banks, the idea was born of locating a monumental sculpture on one of its banks, it was as well as the renowned painter and sculptor Hernando Tejada donated his work called "El gato del Rio" to be cast in bronze on a large scale, which has a height of 3.5 meters, a width of 3.40 and a thickness of 1.95 meters. The sculpture weighs three tons and was cast in Bogotá, where the roof of the workshop had to be dismantled to be moved. The work was inaugurated on July 3, 1996.

Informacion Adicional
"Confirmation will be received at time of booking"
"Not wheelchair accessible"
"Near public transportation"
"Infants must sit on laps"
"Not recommended for travelers with back problems"
"Not recommended for pregnant travelers"
"No heart problems or other serious medical conditions"
"Travelers should have a moderate physical fitness level"
"This experience requires a minimum number of travelers. If it’s canceled because the minimum isn’t met, you’ll be offered a different date/experience or a full refund"
"This tour/activity will have a maximum of 10 travelers"
"Face masks required for travelers in public areas"
"Face masks required for guides in public areas"
"Hand sanitizer available to travelers and staff"
"Social distancing enforced throughout experience"
"Regularly sanitized high-traffic areas"
"Gear/equipment sanitized between use"
"Transportation vehicles regularly sanitized"
"Guides required to regularly wash hands"
"Regular temperature checks for staff"
"Temperature checks for travelers upon arrival"
"Paid stay-at-home policy for staff with symptoms"
"Biosecurity protocols will be applied all the time."