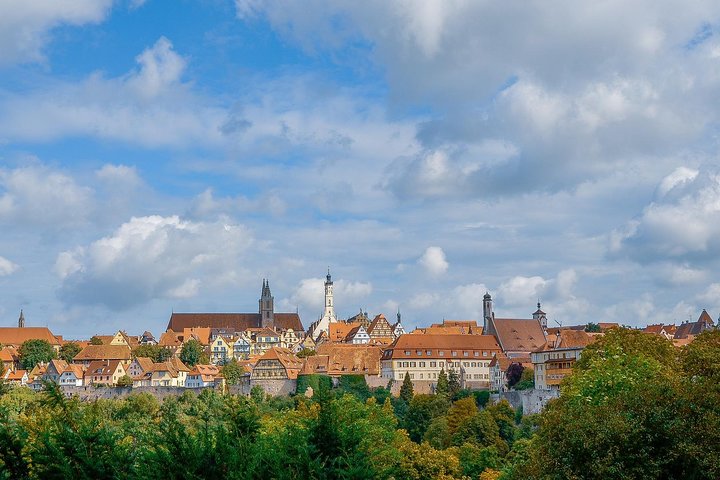 If you ever take the Romantic Road, then a stop in Rothenburg ob der Tauber (meaning ”above the Tauber River”) is a must. Considered by many as the perfect German fairy tale town, this place will make the travellers feel like they live in a medieval theme park. And, because of this, Rothenburg has the strictest conservation orders from all of Germany. As a Free Imperial City from the 13th century onwards, Rothenburg became one of the most important city states of the middle ages. During the 17th century Thirty Years War, the Ex-Mayor Nusch drank 3 litres of wine in a single gulp, the so-called "Master draught", therefore saving the city from destruction. One walk through its old town, with its web of cobbled lanes and the 14th century defensive wall will make everyone understand why this is an unmissable location.

You will learn about:
* The life in the medieval Rothenburg as a free imperial city
* How Bürgermeister Heinrich Toppler transformed this town into one of the most important cities in the area
* The very strict urban conservation orders from Rothenburg
* The story of the Town Hall and its tower
* The Master-Builder's House with its stone sculptures with the seven virtues and seven deadly sins
* How Walt Disney’s “Pinocchio” was influenced by sketches of Rothenburg ob der Tauber
* The "Master draught" story

You will see:
* The Market Square
* The Town Hall Tower
* Baumeisterhaus (Master-Builder's House)
* Marienapotheke (St. Mary's Pharmacy)
* The Medieval Crime and Punishment Museum
* The Plönlein, considered to be one of the most photographed spots in Germany
* The Town Wall
* Church of St. James

The Market Square is the center of urban life in Rothenburg and also the place where some of the most important tourist attractions can be admired like the Town Hall, the Councillors' Tavern and St. George's Fountain. If you are up to it, climb up the 50m Town Hall Tower (tickets not included and based on availability) for some special views and good photo opportunity and listen to the story of the Town Hall Renaissance building from the 16th century.

Do not miss the Master-Builder's House, one of the “loveliest renaissance house in Rothenburg” with its stone sculptures with the seven virtues and seven deadly sins. Close is also the Marienapotheke, a 15th century mansion built by Mayor Jagstheimer. South of the Market Square we will see the Medieval Crime and Punishment Museum, dedicated to torture tools and equipment and not for the faint-hearted.

Then we pass the famous Plönlein (Flat Square), a road crossing found in all travel books of Germany. The triangular square formed by the roads is present in pop culture, history and in your memory forever.

The wall around the Old Town creates a head-shaped figure on the outskirts of the old town. For a good view over the city, we will also climb it. Now to forget is also the Church of St. James, with its ”The Last Supper” masterpiece of Tilman Riemenschneider. This is the only protestant church that has a roman-catholic relic in Germany.

End your tour in the Old Town and enjoy a leisurely walk on your own through the narrow streets or just enjoy a local beer and some traditional dishes in one of the historical buildings close by.