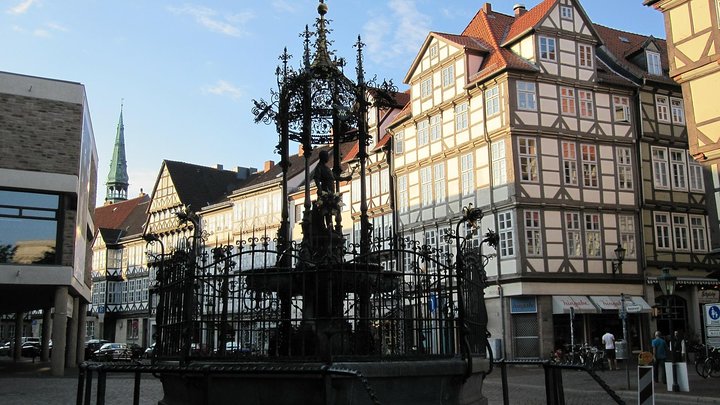 When you imagine Hannover you think of CeBit Computer Expo or the Hannover Messe Industrial Technology Trade Fair? Prepare to be taken by surprise! Hanover it's not only about the largest fairground in the world and hi-tech exhibitions, but it's also a city with a rich history, a city that gave the world a monarchy that ruled Great Britain, a city with a wealth of museums and cultural sites and with Europe's largest urban forest, the Eilenriede. The first contact with this city might not blow you away, but give it some time and it will be hard to ever part. In this tour you will discover all major highlights and hear the history of this city that had to rise like Phoenix from his ashes after World War II but has since become a fascinating blend of old and new.

Meet your guide in front of the Market Church, the main Lutheran church in Hanover. Built in the 14th century it's considered to be one of the most well-known example of the North German brick gothic architectural style. Partially destroyed by an air raid in 1943 and restored later on, its high western tower was a symbol for the power and the wealth of the citizens of the town and it still represents an important landmark of the city.

Admire the Old Town Hall, built in about 100 years, with Romanesque style influences and Neo-Gothic architecture. Listen to your guide as he will explain the portraits of the princes and coats-of-arms it features on the building's murals.

Close by, you can see another landmark, the Ballhof Building that used to be a sports hall designed for ball games out of the wind and rain. It was also used as an assembly hall and later as a theatre. Move on, walking through the winding alleys all the way to Kreuz-Church the oldest church in Hanover, dating from 1333. Mostly destroyed during WWII, like most parts of the Old Town, it was reconstructed after the war.

Continue your walk until you reach Oskar-Winter- Fountain, a local fountain with a fascinating story. The legend says that if you make a wish and turn the small brass ring embedded in the ironwork, that wish will come true. Behind the fountain, you can see the Leibniz House, the place where the mathematician and philosopher Gottfried Wilhelm Leibniz (1646-1716) used to live.

Let’s move on to our next highlight, the Aegidien Church, a reminder to the horrors of war. Destroyed during the WWII, it was never repaired or reconstructed. Inside the ruins you can see the Peace Bell, donated by the city of Hiroshima. Annually, on 6th of August at 08:15, a delegation from Hiroshima comes to ring the bell, in the memory of those that died during the air strike.

We continue your walk to the last tourist attractions, the New Town Hall. When the New Town Hall was opened by Emperor Wilhelm II, the City Director announced: "Ten million Marks, Your Majesty – and all paid for in cash".

Visit the Town Hall and you will understand exactly why the costs were so high. Climb the 98 m to the top in the curved lift, the only one of its kind in Europe, inside its green dome for a breathtaking view of the city and, if lucky enough, a view of the Harz Mountain range.

Informacion Adicional
"Confirmation will be received at time of booking"
"Wheelchair accessible"
"This walk tour suitable for any age"
"For this walk tour no transportation needed"
"Near public transportation"
"Most travelers can participate"
"This is a private tour/activity. Only your group will participate"
"Face masks required for travelers in public areas"
"Face masks required for guides in public areas"
"Social distancing enforced throughout experience"
"Guides required to regularly wash hands"