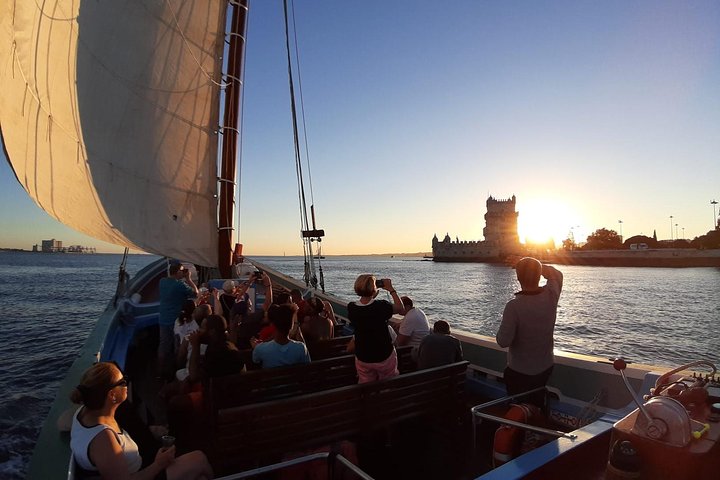 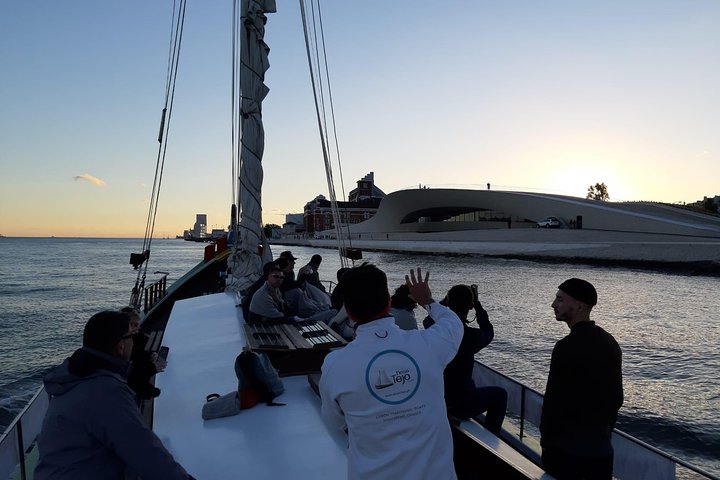 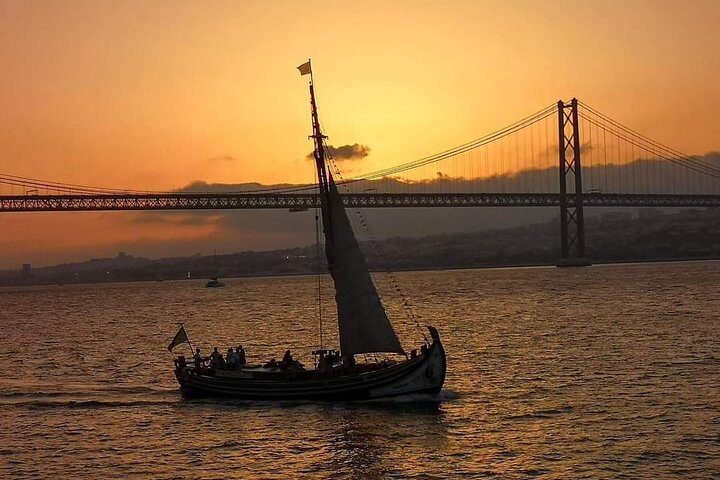 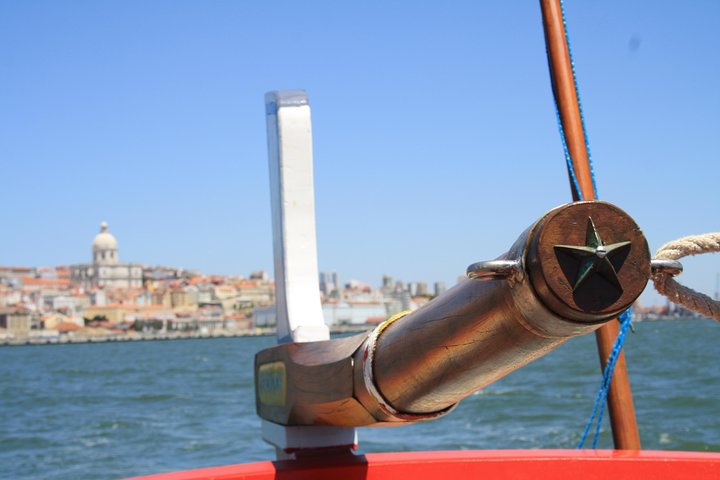 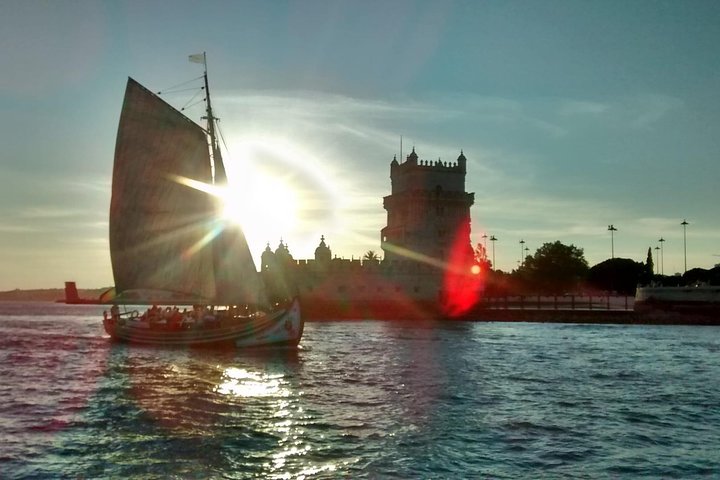 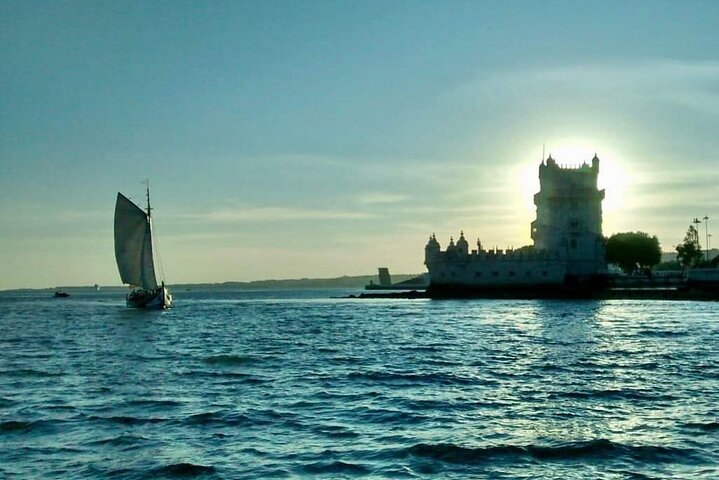 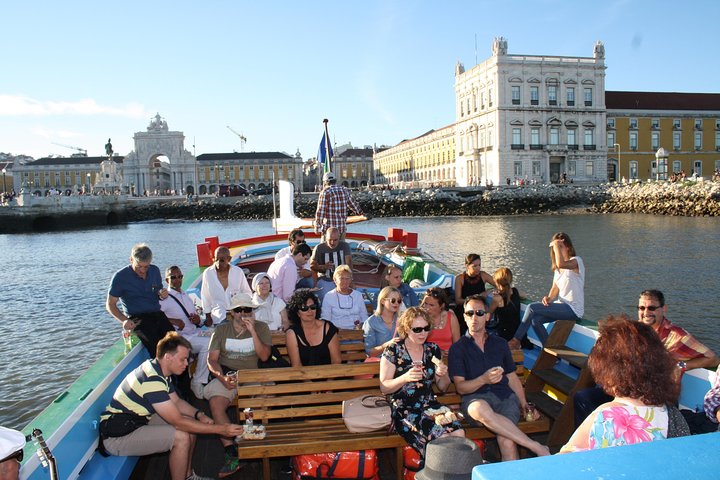 The sunset cruise lasts for 2 hours and starts at the renovated boat station "Sul e Sueste" next to Commerce Square. During this shared cruise, you have the opportunity to see wonderful landscapes of the historical city center, passing by such sights as: the Commerce Square, São Jorge Castle, Alfama, National Pantheon, Santa Apolónia Station, Cacilhas, Christ the King, 25th of April Bridge, Tower of Belem, Discoveries Monument, MAAT and Palace of Ajuda. After the sunset the colors of the sky change and create an amazing experience, helped by the wines of the south region of Setúbal that we serve freely during the tour. We hear Fado all the way which gives the right environment to enjoy the cruise, the wine, the views and the amazing sailors stories around the Lisbon traditional boats.

São Jorge Castle (Portuguese: Castelo de São Jorge; Portuguese pronunciation: [kɐʃˈtɛlu dɨ sɐ̃w̃ ˈʒɔɾʒ(ɨ)]; English: Saint George Castle) is a historic castle in the Portuguese capital of Lisbon, located in the freguesia of Santa Maria Maior. Human occupation of the castle hill dates to at least the 8th century BC[1][2] while the first fortifications built date from the 1st century BC.[3] The hill on which São Jorge Castle stands has played an important part in the history of Lisbon, having served as the location of fortifications occupied successively by Phoenicians, Carthaginians, Romans, and Moors, before its conquest by the Portuguese in the 1147 Siege of Lisbon. Since the 12th century, the castle has variously served as a royal palace, a military barracks, home of the Torre do Tombo National Archive, and now as a national monument and museum.

The Jerónimos Monastery or Hieronymites Monastery (Portuguese: Mosteiro dos Jerónimos, IPA: [muʃˈtɐjɾu ðuʃ ʒɨˈɾɔnimuʃ]), is a former monastery of the Order of Saint Jerome near the Tagus river in the parish of Belém, in the Lisbon Municipality, Portugal; it was secularised on 28 December 1833 by state decree and its ownership transferred to the charitable institution, Real Casa Pia de Lisboa.[1]

The monastery is one of the most prominent examples of the Portuguese Late Gothic Manueline style of architecture in Lisbon. It was classified a UNESCO World Heritage Site, along with the nearby Tower of Belém, in 1983.

The Alfama (Portuguese pronunciation: [aɫˈfɐmɐ]) is the oldest neighborhood of Lisbon, spreading on the slope between the São Jorge Castle and the Tagus river. Its name comes from the Arabic Al-hamma (الحَمّة), meaning "hot fountains" or "baths". The district includes the freguesias (parishes) of São Miguel, Santo Estêvão, São Vicente de Fora and part of the two streets, "Freguesia da Sé: Rua do Barão" and "Rua São João da Praça". It contains many important historical attractions, as well as an abundance of Fado bars and restaurants.

The Church of Santa Engrácia (Portuguese: Igreja de Santa Engrácia, pronounced [iˈɣɾeʒɐ ðɨ ˈsɐ̃tɐ ẽˈɡɾasiɐ]) is a 17th-century monument in Lisbon, Portugal. Originally a church, in the 20th century it was converted into the National Pantheon (Panteão Nacional, pronounced [pɐ̃tiˈɐ̃w̃ nɐsiuˈnaɫ]), in which important Portuguese personalities are buried. It is located in the Alfama neighborhood, close to another important Lisbon monument, the Monastery of São Vicente de Fora.

Padrão dos Descobrimentos (Portuguese pronunciation: [pɐˈdɾɐ̃w̃ duʃ dɨʃkubɾiˈmẽtuʃ]; lit. Monument of the Discoveries) is a monument on the northern bank of the Tagus River estuary, in the civil parish of Santa Maria de Belém, Lisbon. Located along the river where ships departed to explore and trade with India and the Orient, the monument celebrates the Portuguese Age of Discovery (or Age of Exploration) during the 15th and 16th centuries.

The Lisbon Cathedral (Portuguese: Santa Maria Maior de Lisboa or Sé de Lisboa; Metropolitan Cathedral of St. Mary Major), often called simply the Sé, is a Roman Catholic cathedral located in Lisbon, Portugal. The oldest church in the city is the seat of the Patriarchate of Lisbon. Built in 1147, the cathedral has survived many earthquakes and has been modified, renovated and restored several times. It is nowadays a mix of different architectural styles. It has been classified as a National Monument since 1910.

The 25 de Abril Bridge (Portuguese: Ponte 25 de Abril, 25th of April Bridge, Portuguese pronunciation: [ˈpõt(ɨ) ˈvĩt i ˈsĩku ðɨ ɐˈβɾiɫ]) is a suspension bridge connecting the city of Lisbon, capital of Portugal, to the municipality of Almada on the left (south) bank of the Tagus river. It was inaugurated on August 6, 1966. It is often compared to the Golden Gate Bridge in San Francisco, US, because they are both suspension bridges of similar color. It was built by the American Bridge Company which constructed the San Francisco–Oakland Bay Bridge, but not the Golden Gate. With a total length of 2,277 metres (7,470 ft), it is the 40th largest suspension bridge in the world. The upper deck carries six car lanes, while the lower deck carries a double track railway electrified at 25 kV AC; the train platform was added in 1999. After the Carnation Revolution which overthrew the remnants of Salazar's dictatorship, the bridge was renamed for April 25, the date of the revolution.

Belém Tower (Portuguese: Torre de Belém, pronounced [ˈtoʁ(ɨ) dɨ bɨˈlɐ̃ȷ̃]), officially the Tower of Saint Vincent (Portuguese: Torre de São Vicente) is a 16th-century fortification located in Lisbon that served as a point of embarkation and disembarkation for Portuguese explorers and as a ceremonial gateway to Lisbon.[1][2] It was built during the height of the Portuguese Renaissance, and is a prominent example of the Portuguese Manueline style,[3] but it also incorporates hints of other architectural styles.[4] The structure was built from lioz limestone and is composed of a bastion and a 30-metre (98.4 ft),[5] four-storey tower.

Since 1983, the tower has been a UNESCO World Heritage Site, along with the Jerónimos Monastery. It is often portrayed as a symbol of Europe's Age of Discoveries[2] and as a metonym for Portugal or Lisbon, given its landmark status. In fact, the tower was built on a small island in the Tagus river near the Lisbon shore.[4][6]

The Palace of Ajuda (Portuguese: Palácio da Ajuda, Portuguese pronunciation: [ɐˈʒudɐ]) is a neoclassical monument in the civil parish of Ajuda in the city of Lisbon, central Portugal. Built on the site of a temporary wooden building constructed to house the Royal family after the 1755 earthquake and tsunami, it was originally begun by architect Manuel Caetano de Sousa, who planned a late Baroque-Rococo building. Later, it was entrusted to José da Costa e Silva and Francisco Xavier Fabri, who planned a magnificent building in the modern neoclassical style.

MAAT is a cultural project for the city of Lisbon that is focused on three areas - Art, Architecture, and Technology. The €20m museum sits on the River Tagus (Rio Tejo) to the west of the city centre.[1] and "one of Europe's most lyrical new museums".[2] It establishes a connection between the new building and the Tejo Power Station, one of Portugal's most prominent examples of industrial architecture from the first half of the 20th century, and one of the most visited museums in the country. The museum is designed by Amanda Levete Architects.

Informacion Adicional
"Confirmation will be received at time of booking"
"Not wheelchair accessible"
"Children must be accompanied by an adult"
"Show up 15 minutes in advance"
"Most travelers can participate"
"This experience requires good weather. If it’s canceled due to poor weather, you’ll be offered a different date or a full refund"
"This tour/activity will have a maximum of 47 travelers"
"Face masks required for travelers in public areas"
"Face masks required for guides in public areas"
"Hand sanitizer available to travelers and staff"
"Regularly sanitized high-traffic areas"
"Guides required to regularly wash hands"
"Regular temperature checks for staff"
"Temperature checks for travelers upon arrival"
"Paid stay-at-home policy for staff with symptoms"