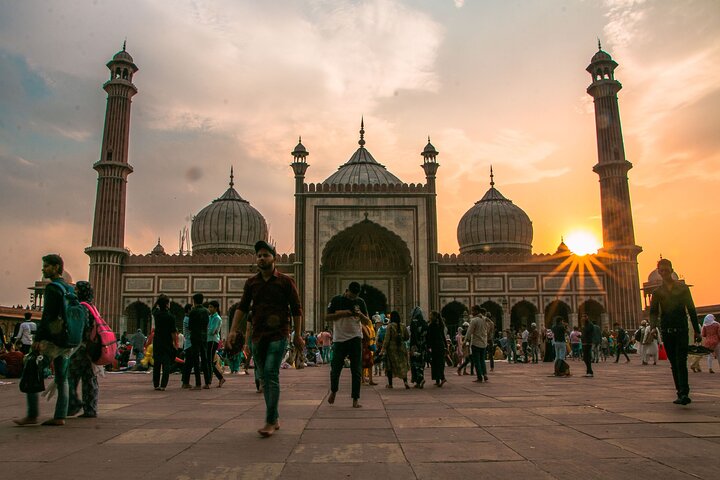 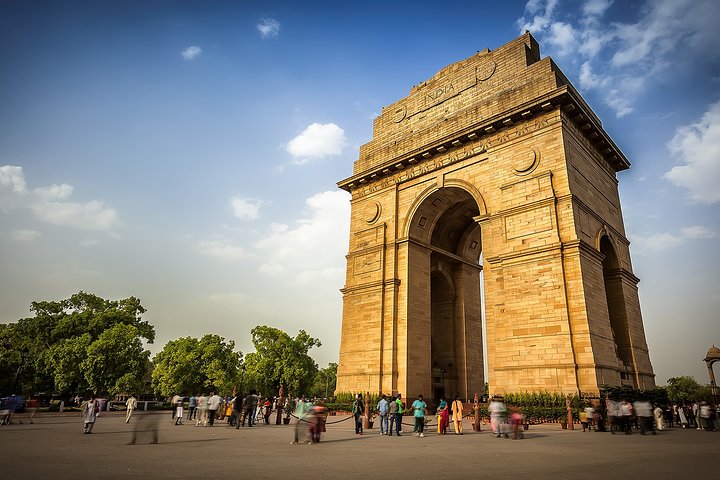 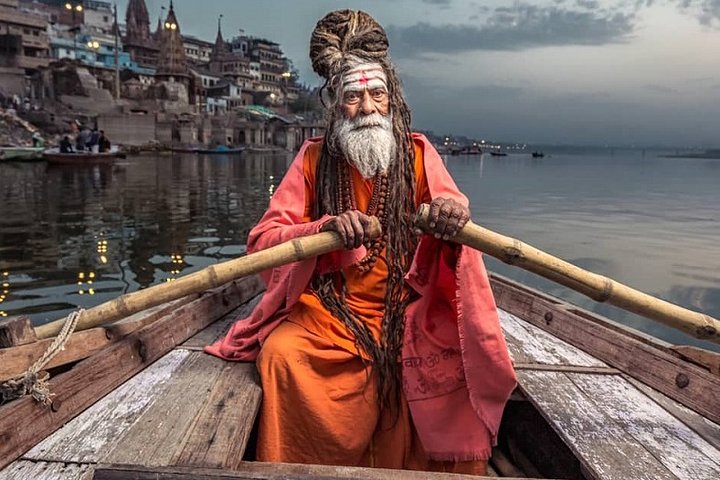 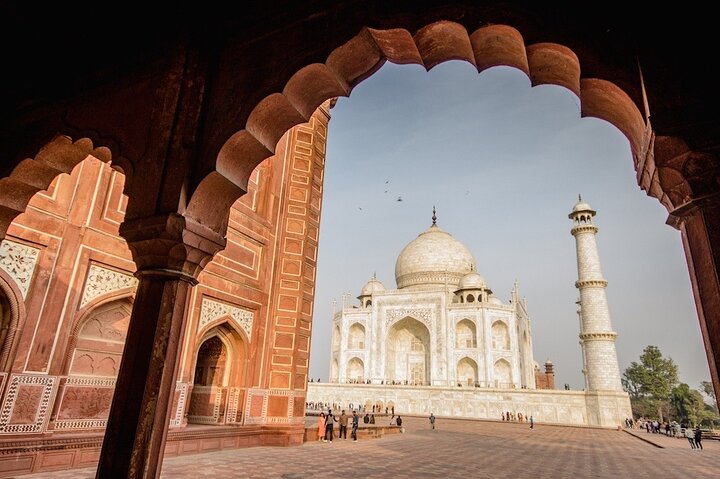 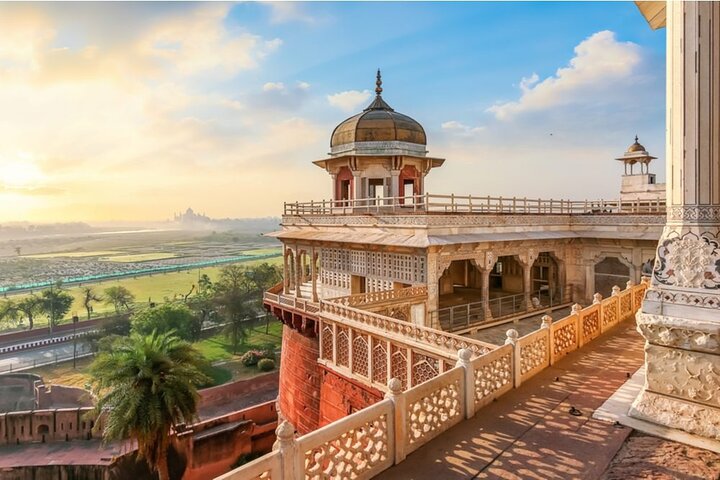 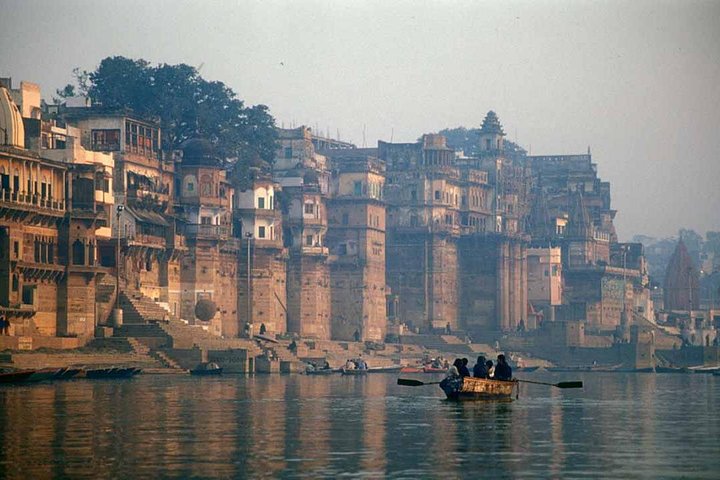 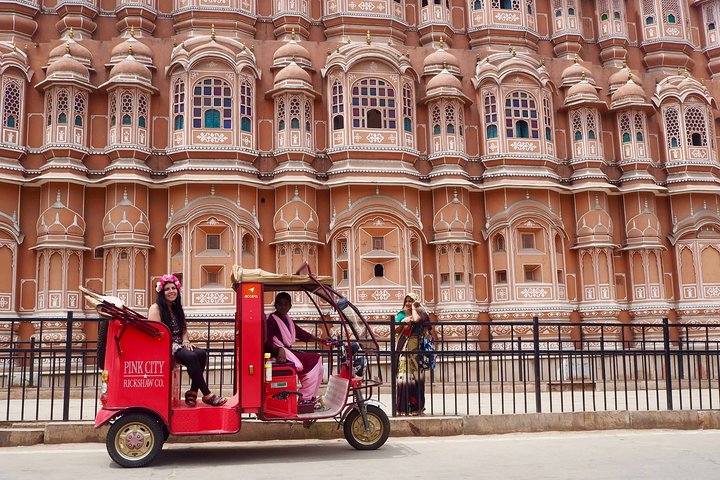 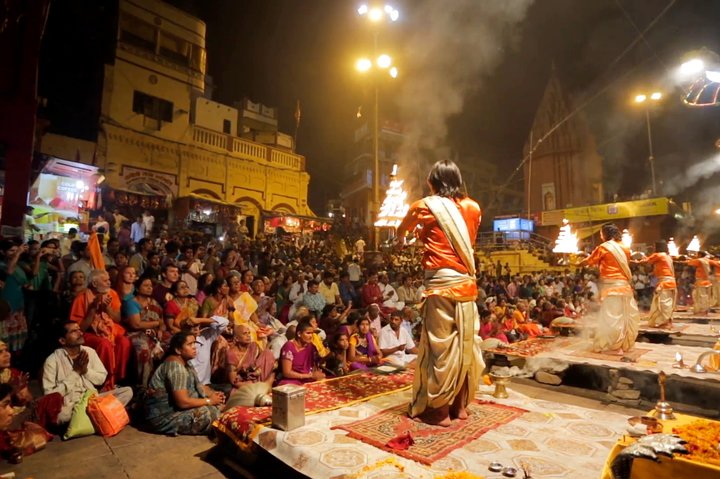 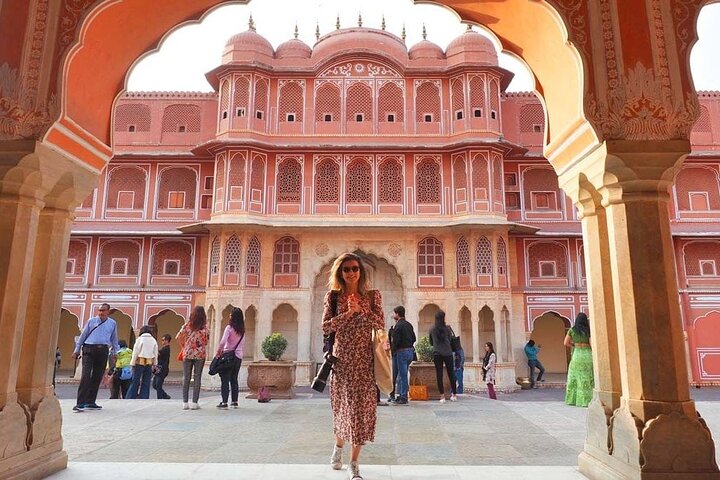 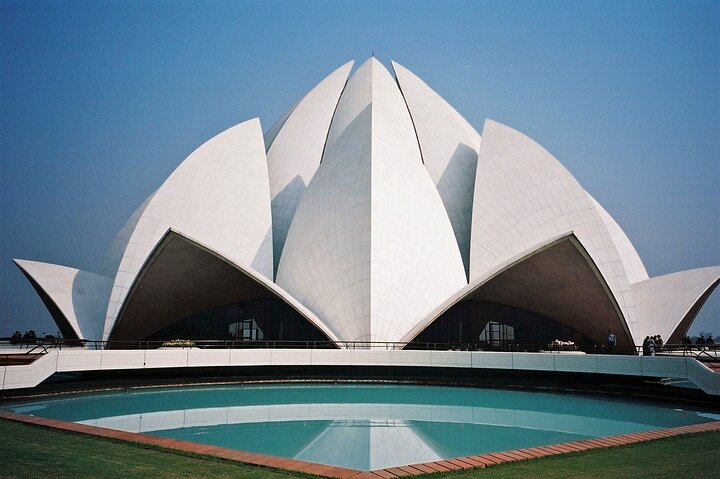 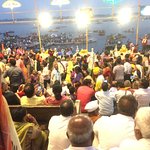 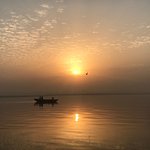 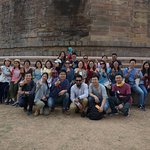 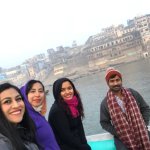 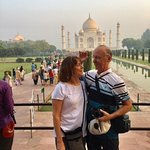 Explore India’s Golden Triangle on this fabulous 10-day tour led by an expert English-speaking guide. This is a spiritual, cultural, and informative journey. With all the important details already organized for you, such as hotel accommodation, itinerary, transport, train journey, you can really relax and concentrate on experiencing the delights of India free from all the normal stresses of traveling. On this tour, you will encounter unique experiences like witnessing the Taj Mahal, Agra and at sunrise and soaking up the spiritual atmosphere of the River Ganges with a morning cruise in Varanasi.

Pass By: New Delhi, New Delhi, National Capital Territory of Delhi
Our driver picks you up from New Delhi International airport and transfers to your pre-booked hotel. Today no tour only relaxation

You must exit from the exit gate number – 5 there our driver available holding your name placard.

Jama Masjid is another marvelous treasure of the Old City and is the largest mosque in India. Its courtyard can hold an incredible 25,000 devotees. The mosque took 13 years to build and was completed in 1650
Duration: 30 minutes

Stop At: Red Fort, Netaji Subhash Marg, New Delhi 110002 India
The most famous monument, the Red Fort, stands as a powerful reminder of the Mughal emperors who ruled India. Its walls, which stretch for over two kilometers (1.2 miles), were built in 1638 to keep out invaders.

"Red Fort is closed on Mondays, in that situation can stop the car there for 15-20 minutes for photography"
Duration: 1 hour

Pass By: India Gate, Rajpath Near Connaught Place New Delhi, New Delhi 110001 India
The towering archway of India Gate at the center of New Delhi is a war memorial, built-in memory of the Indian soldiers who lost their lives fighting for the British Army in World War I Here we take the drive pass visit can take 2 rounds to take good pictures.

Pass By: Parliament House, Sansad Marg, New Delhi 110002 India
Near the India gate location, the driver take you to the drive pass their permission is not to stop the car

Stop At: Humayun's Tomb, Mathura Road Opp Nizamuddin Mosque, New Delhi 110013 India
It was the first of this type of Mughal architecture to be built in India, and the Mughal rulers followed it up with an extensive period of construction all over the country. The tomb is part of a greater complex that's set amongst the beautiful garden
Duration: 45 minutes

Stop At: Lotus Temple Rd, Bahapur, Shambhu Dayal Bagh, Kalkaji Near Kalkaji Temple, East of Nehru Place, New Delhi 110019 India
The Bahai Temple is commonly referred to as the Lotus Temple, as it's shaped like a lotus flower. It's particularly pretty at night when it's attractively lit up.

Temple is closed on Mondays. Can take the drive pass visits in case of sightseeing is doing on Monday
Duration: 30 minutes

Stop At: Qutub Minar, Qutb Minar, Mehrauli, New Delhi 110030 India
Qutab Minar, the tallest brick minaret in the world, is an incredible example of early Indo–Islamic architecture. It was built in 1206, but the reason remains a mystery. Some believe that it was made to signify victory and the beginning of Muslim rule in India.

Later return to the hotel for an overnight stay in Delhi.
Duration: 1 hour

Stop At: Jantar Mantar - Jaipur, Tripoliya Bazaar near entrance to City Palace, Jaipur 302020 India
Today after breakfast around 8:30 am drive to Jaipur.

Car stops at mid-way for a tea-coffee break and drives to Jaipur.

Upon arrival in Jaipur meet with your tour guide and visit:-

Observatory: built-in the 18th century by Maharaja Sawai Jai Singh II, the huge masonry instruments were used to study the movement of constellations and stars in the sky. Enormous sun-dial still provides accurate time, which is subject to daily corrections
Duration: 1 hour

Stop At: City Palace of Jaipur, Tripolia Bazar Near Jantar Mantar, Jaipur 3023002 India
situated in the heart of the old city, it occupies about one-seventh of the old city area. The palace is a blend of Rajput and Mughal architecture, it houses a Seven storeyed Chandra Mahal in the center, which affords a fine view of the gardens and the city. Diwan-E-Am (Hall of public audience) has intricate decorations and a collection of manuscripts, Diwan-E-Khas (Hall of private audience) has a marble pawed gallery Mubarak Mahal has a rich collection of costumes and textiles.

Early morning after breakfast proceed to a sightseeing tour of Jaipur, Direct sunlight on the Hawa Mahal is most amazing sights to see thru drive pass. driver stop car for 15 minutes for the photography:- Hawa Mahal:- built-in 1799, by Maharaja Sawai Pratap Singh, is the most recognizable monument of Jaipur. The 5 storied stunning semi-octagonal monument having 152 windows with over hanging latticed balconies is a fine piece of Rajput architecture.
Duration: 15 minutes

Stop At: Amber Palace, Devisinghpura, Amer, Jaipur 302001 India
The old capital of the Kachhwahas stands atop a range of craggy hills. The fort is remarkable as much for the majestic grandeur of its surroundings as for its sturdy battlements and beautiful palaces. It is a fine blend of Hindu and Muslim architecture. The solemn dignity of it red sandstone and white marble pavilions, when reflected in the lake at the foothill, is a sight to behold.

There is an option to reach uphill by the Jeep, the guide will assist you to go there. Fee directly pays by you.
Duration: 2 hours

Stop At: Jal Mahal, Amer Road, Jaipur 302002 India
On the way Back From Amber Fort, this small palace is set in the middle of Man Sagar Lake. Renovation around the lake is in progress.

There option to take lunch and can visit the famous block printing workshop in JAIPUR
Duration: 15 minutes

Drive drop you there at one place and fixed the return time with you and again you will be picked up from there and transfer to the hotel for overnight stay in Jaipur
Duration: 1 hour

Stop At: Fatehpur Sikri India
After breakfast drive to Agra. Enroute visit at Fatehpur Sikri is a small city in northern India, just west of Agra, founded by a 16th-century Mughal emperor. Red sandstone buildings cluster at its center. Buland Darwaza gate is the entrance to the Jama Masjid mosque. Nearby is the marble Tomb of Salim Chishti. Diwan-E-Khas hall has a carved central pillar. Jodha Bais Palace is a mix of Hindu and Mughal styles, next to the 5-story Panch Mahal that overlooks the site. Later drive to Agra. Upon arrival check-in to the hotel. Overnight stay at hotel in Agra
Duration: 45 minutes

Stop At: Taj Mahal, Dharmapuri, Forest Colony, Tajganj, Agra 282001 India
Wake up early morning visit at Sunrise Taj MAHAL: You cannot think of Agra without thinking of TajMahal. Or, you might not have thought of Agra were it not for the monument of love. TajMahal, the white marble beauty was constructed by Shah Jahan in memory of his beloved wife, Mumtaz Mahal. The monument stands proof for the brilliance of Mughal architecture. Named as one of the wonders of the world, the Taj Mahal stands the test of time.

Later return to the hotel for breakfast.
Duration: 2 hours

Stop At: Agra Fort Rakabgani, Agra 282003 India
After breakfast visit to the Fort, This is situated near the gardens of the world-famous TajMahal. Called the Red Fort of Agra, you will be awe-inspired by the powerful fortress. The fortress comprises many palaces namely, Jahangir Palace, KhasMahal, and so on. There are audience halls and two mosques. The entire fortress is a symbol of Mughal’s grandeur.

Later return to the hotel for check-out and take a rest in the hotel lobby.

Evening you will be transferred to the train station in Agra there you have to board the train for Varanasi.

Note: Your driver services end from here and another driver pick you once you reach Varanasi next day early morning
Duration: 1 hour

Stop At: Dasaswamedh Ghat Road Bangali Tola, Varanasi 221001 India
Today you will be reached Varanasi train station early morning our guide with driver will be meeting at the train platform and you will be transferred to the hotel. Afternoon you will enjoy the old city tour and go the Ganges Ghat for the evening Aarti ceremony at Dashashwamedh Ghat is the main ghat in Varanasi on the Ganga River. It is located close to Vishwanath Temple and is probably the most spectacular ghat.

Stop At: Ganges River, Varanasi India
Wake up early morning before sunrise. The driver meets you and transfers you to the Ghat to enjoy your sunrise boat ride in Varanasi.

This is said to be India's most sacred city, situated on the western bank of the holy River Ganges. With hundreds of temples dotting the city, sunrise on the riverfront as seen from a boat can be a spiritually uplifting sight.

Later return to the hotel for breakfast and afternoon visit next excursion which is Sarnath.
Duration: 2 hours

Stop At: Sarnath Via-Anlabereni, Varanasi 759026 India
Sarnath is the main place to visit while on tour around Varanasi. A much-sacred pilgrimage and tourist spot in the country. Sarnath is only 10 km away from Varanasi. It is one of the four most significant Buddhist pilgrimage places in India; Sarnath is the place where Lord Buddha first covey his lecture after attaining "nirvana". Sarnath Buddhist Temple:- There are a number of twentieth-century Buddhist temples in Sarnath. Many of these Buddhist temples at Sarnath are built and maintained by monks from Tibet, China and Japan but the main Buddhist temple is the MulagandhakutiVihar. Sarnath Museum:- Sarnath has yielded a rich collection of sculptures, artifacts and edifices comprising numerous Buddha and Bodhisattva images and other ancient remains. To house all the findings and excavations at Sarnath, the Archaeological Survey of India established a site Museum at Sarnath. Later return drive to the hotel for an overnight stay in Varanasi
Duration: 3 hours

Pass By: New Delhi, New Delhi, National Capital Territory of Delhi
The morning after breakfast at leisure for you, later transfer to the airport in Varanasi there you have to board your flight back to Delhi. (*Flight ticket is not included in the tour)

Upon arrival in Delhi meet our representative at the airport holding with your name placard and transfer to the hotel.

Overnight stay & relaxation at the hotel in Delhi.

Pass By: New Delhi, New Delhi, National Capital Territory of Delhi
This day will be a free day until the afternoon for relaxation and souvenir shopping without transport.

Afternoon transfer to the airport or train station for your onward journey. (Trip ends with magical memories)

Informacion Adicional
"Confirmation will be received at time of booking"
"A minimum of 2 people per booking is required"
"Operates in all weather conditions, please dress appropriately"
"English language guide provided free of charge; other languages available upon request, for additional charge"
"Not wheelchair accessible"
"Near public transportation"
"Most travelers can participate"
"This is a private tour/activity. Only your group will participate"
"Face masks required for travelers in public areas"
"Face masks required for guides in public areas"
"Hand sanitizer available to travelers and staff"
"Social distancing enforced throughout experience"
"Regularly sanitized high-traffic areas"
"Transportation vehicles regularly sanitized"
"Guides required to regularly wash hands"
"Regular temperature checks for staff"
"Temperature checks for travelers upon arrival"

Start Time: 8:30 AM
Duration: 10 Days
Start location: Traveler pickup is offered
The traveler must submit their arrival flight details along with the passport details.

Arrival flight details need to send drivers to pick you up from the International airport.