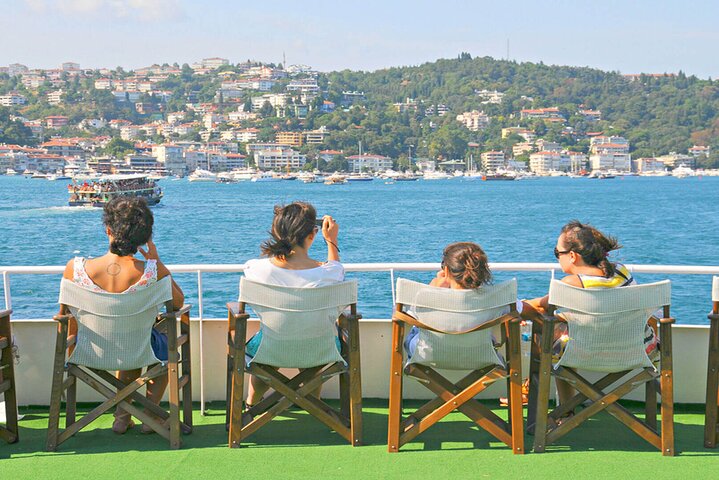 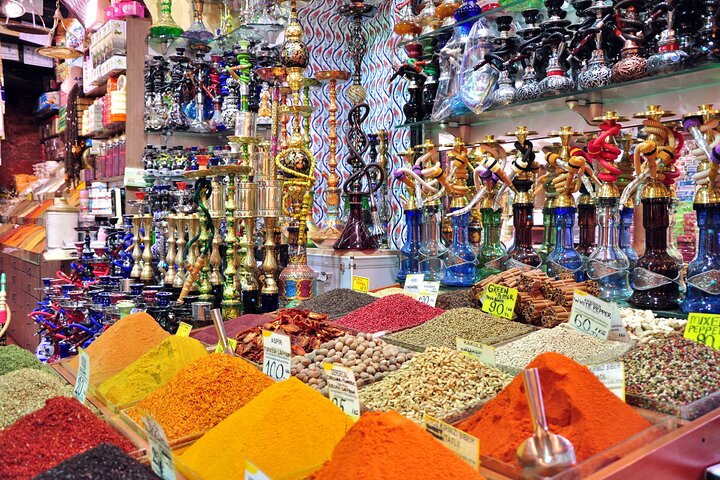 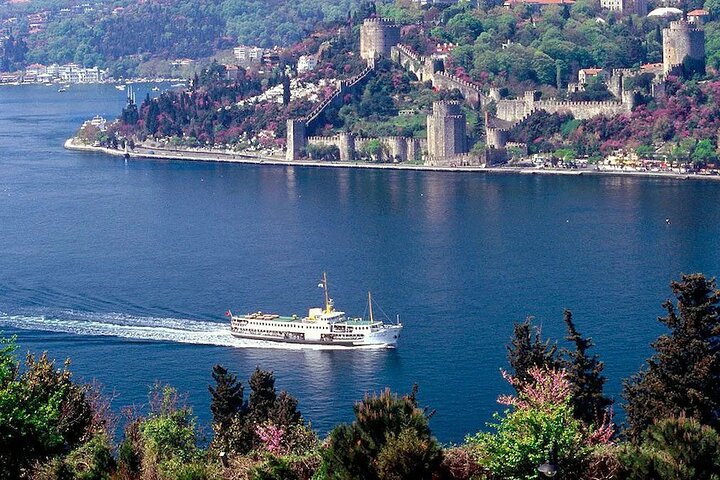 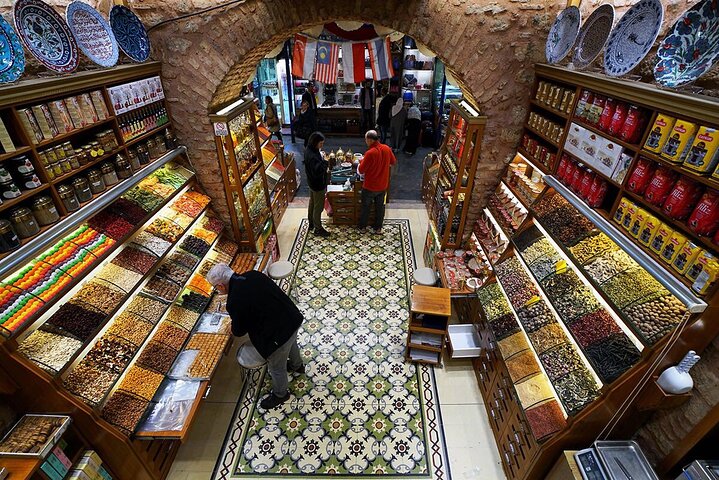 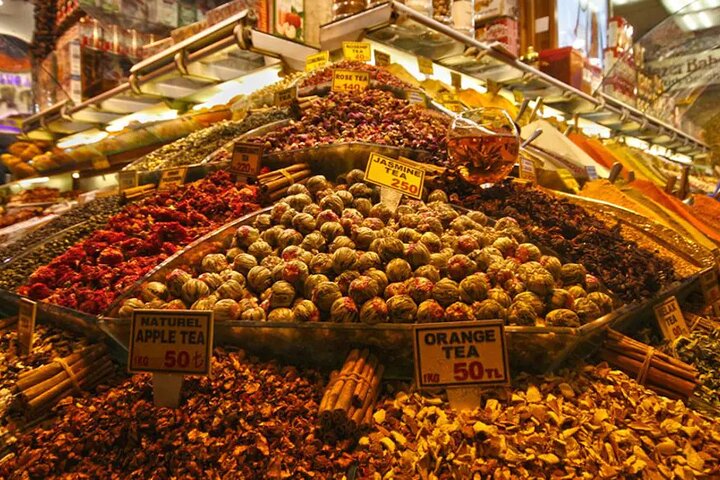 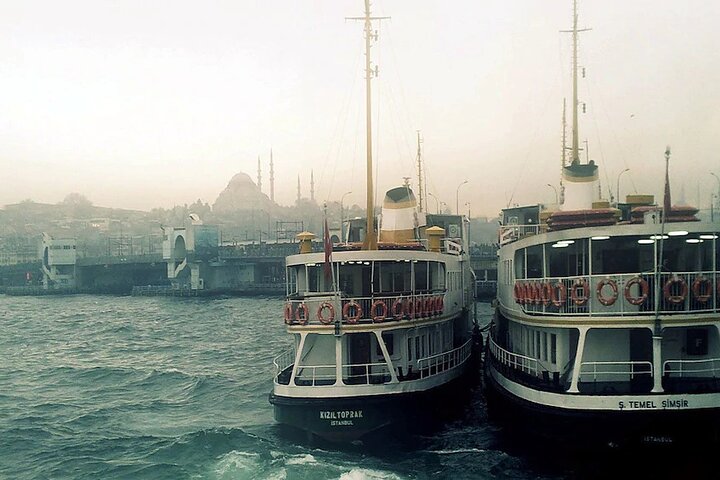 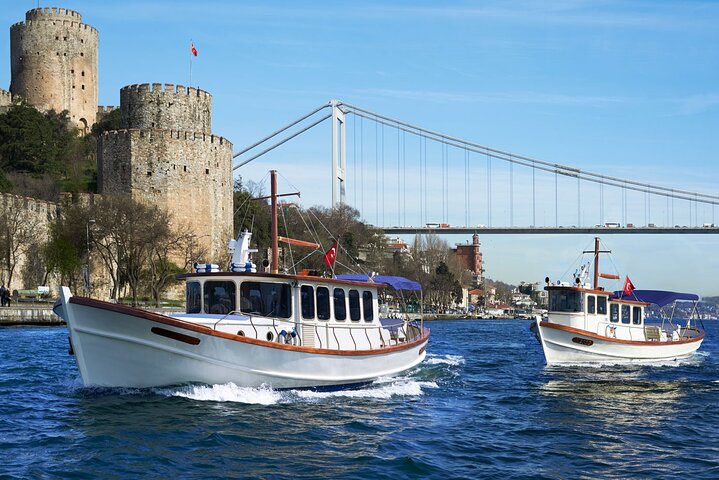 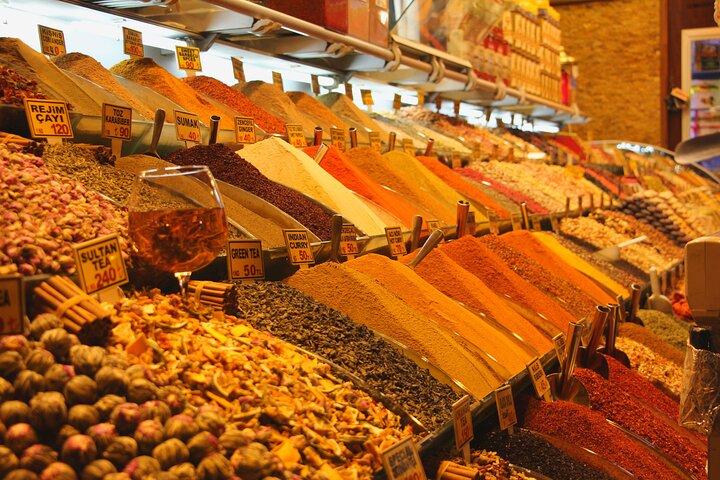 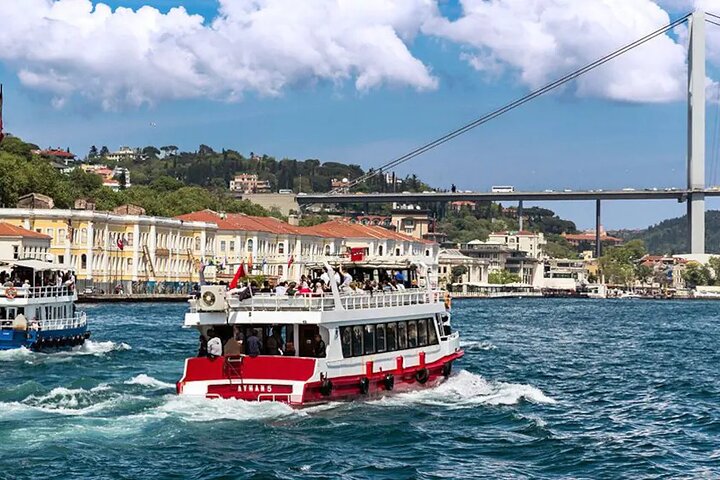 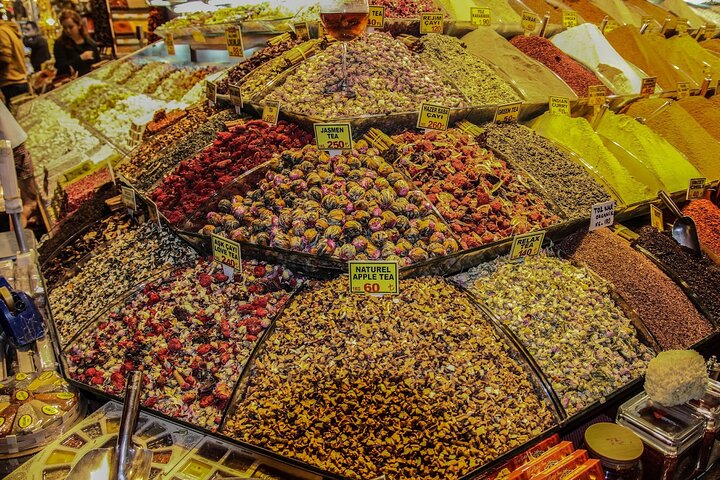 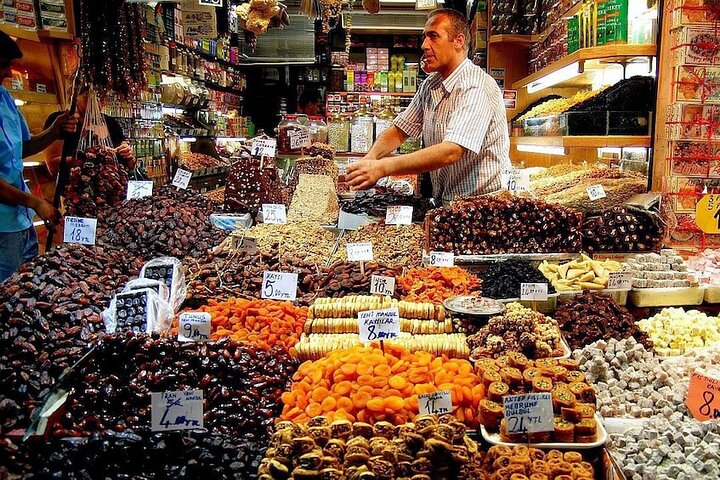 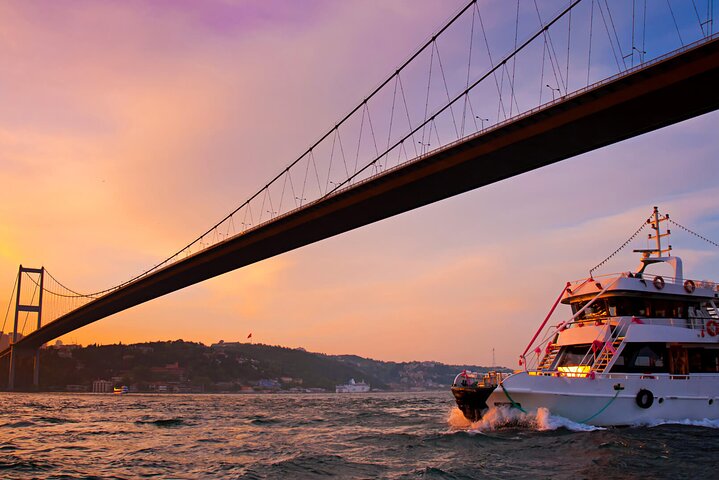 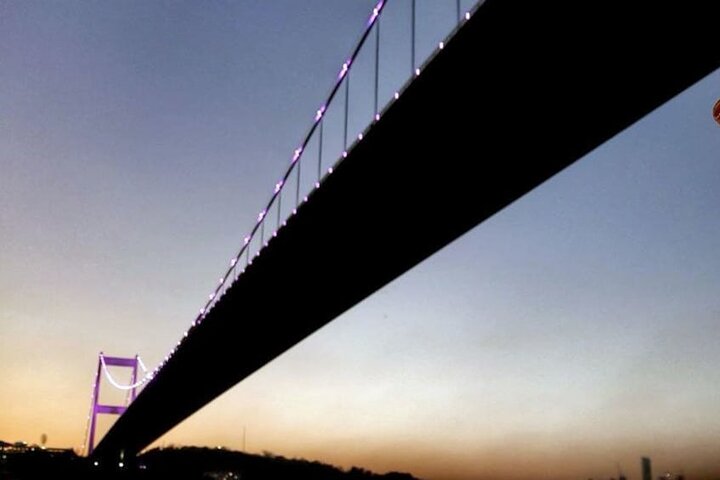 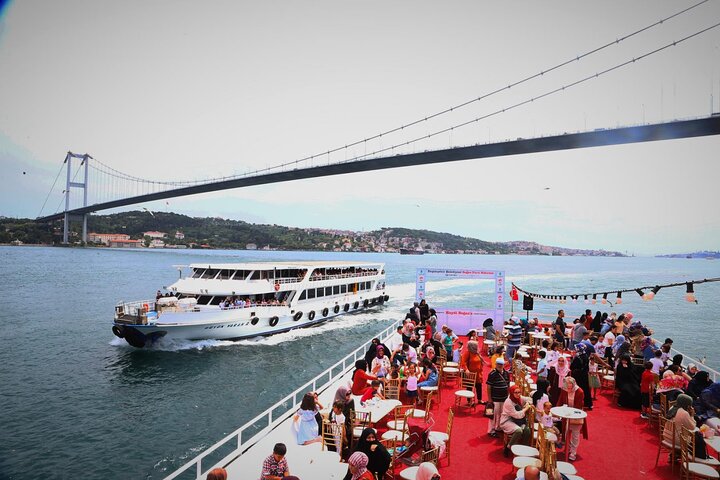 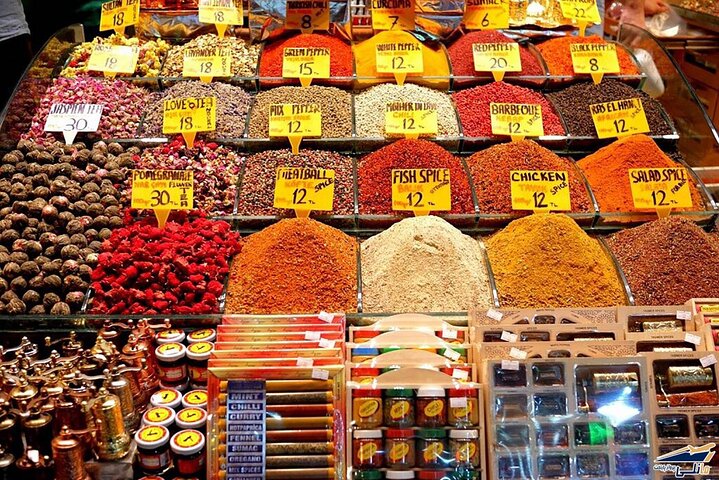 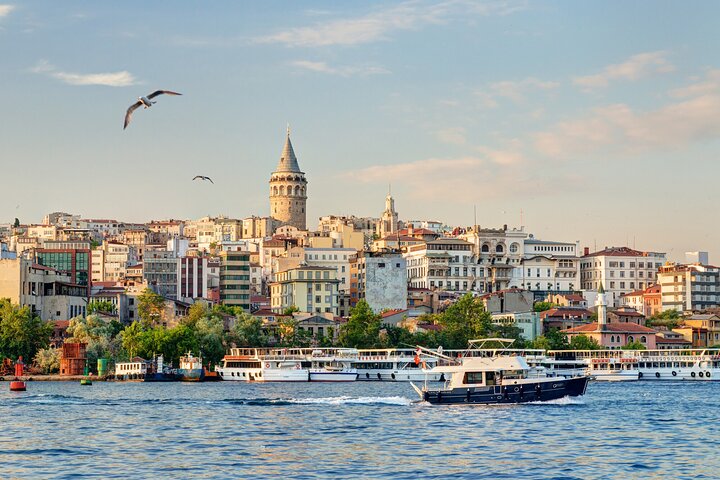 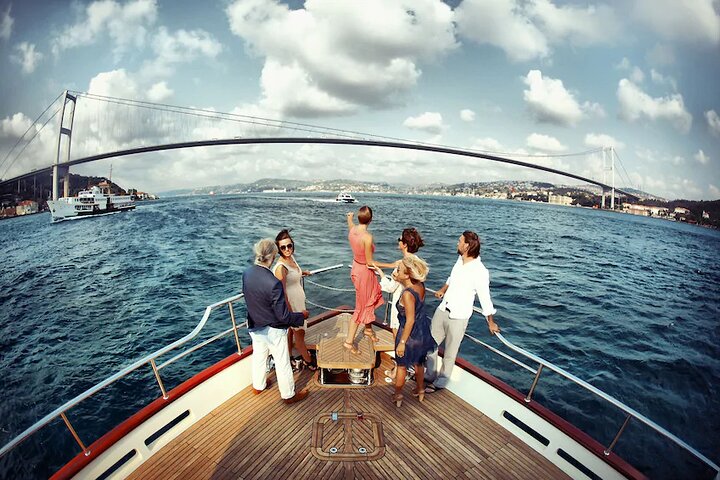 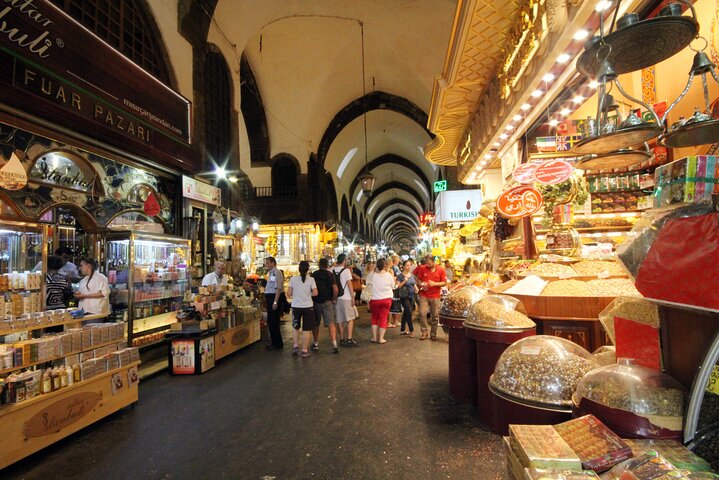 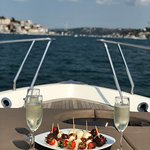 Afternoon Bosphorus Cruise Along the Shore

Imagine a day being on a boat enjoying the breath taking views of Bosphorus shores as a poet once described "God's beautiful calligraphy written by an ink made of sapphires" where two continents meet. Ortaköy, Bebek, Beşiktaş, Dolmabahçe, Çırağan Palace, Maiden's Tower, Yali (wooden houses of the wealthy) and Beylerbeyi Palace are the highlights of the city's fairy tale like skyline from waiting to be seen.

Get on a public boat to sail along the Bosphorus.

A poet once described the Bosporus as “God’s beautiful calligraphy written by an ink made of sapphires”. This straight, separating (and connecting) to two continents that form the two faces of a city, take its name from a mythological legend. Ever since those ancient times, it had marveled people with its beauty.

The cruise of the Bosporus will start at Sariyer or Kabataş piers; and while cruising along the Asian and European shores, you will be surprised to see the harmony of Ottoman and modern architecture; as well as having an opportunity to see the major highlights of the city’s fairy tale-like skyline from the sea.

Maiden’s Tower: Built to protect a Princess, Maiden’s Tower became a pearl on the Bosphorus Strait. In spite of its beauty, Tower failed to keep the princess alive, but stood still for the visitors to pay a visit.

Ortaköy (literally Middle Village in Turkish) in Greek known as Agios Fokas (Άγιος Φωκάς) in the Byzantine period and Mesachorion (Μεσαχώριον, meaning "middle village") later, is a neighbourhood, formerly a small village, within the Beşiktaş district of Istanbul, Turkey, located in the middle of the European bank of the Bosphorus.

Ortaköy was a cosmopolitan area during the Ottoman era and the first decades of the Turkish Republic, with communities of Turks, Greeks, Armenians and Jews. Today the neighbourhood still hosts many different religious (Muslim, Jewish, Orthodox, and other Christian) structures. It is also a popular spot for locals and tourists alike, with its art galleries, night clubs, cafés, bars, and restaurants.

Rumelihisarı (also known as Rumelian Castle and Roumeli Hissar Castle) or Boğazkesen Castle (meaning "Strait-Blocker Castle" or literally "Strait-Cutter Castle") is a medieval fortress located in Istanbul, Turkey, on a series of hills on the European banks of the Bosphorus. The fortress also lends its name to the immediate neighborhood around it in the city's Sarıyer district.

Conceived and built between 1451 and 1452 on the orders of Ottoman Sultan Mehmed II, the complex was commissioned in preparation for a planned Ottoman siege on the then-Byzantine city of Constantinople,[1] with the goal of cutting off maritime military and logistical relief that could potentially come to the Byzantines' aid by way of the Bosphorus Strait, hence the fortress's alternative name, "Boğazkesen", i.e. "Strait-cutter" Castle. Its older sister structure, Anadoluhisari ("Anatolian Fortress"), sits on the opposite banks of the Bosporus.

The suburb is home to several exclusive yalıs that used to be owned by Ottoman era prominent figures. The small Osman Reis mosque was built by Alexander Vallaury in 1904 on the site of a 17th-century mosque. Vallaury also designed the Ahmed Afif Paşa Yalısı behind it, where Agatha Christie stayed as a guest in 1933 while writing Murder on the Orient Express.

There are several Christian churches in the neighbourhood. The Greek Orthodox church of Dormition of the Mother of God (Panayia Kumariotisa Rum Ortodoks Kilisesi, Koybaşı Cad. No. 108) was built in 1837 at the request of sultan Mahmud II′s personal physician Stefanos Karatheodori (Greek: Στέφανος Καραθεοδωρής). His and his son Alexander Karatheodori Pasha′s tombstones are next to the wooden bell tower west of the church.

Tarabya (Ottoman Turkish: Tarabiye‎, Greek: Θεραπειά, romanized: Therapiá) is a neighbourhood in the Sarıyer district of Istanbul, Turkey. It is located on the European shoreline of the Bosphorus strait, between the neighbourhoods of Yeniköy and Kireçburnu. It was the site of the ancient town of Pharmakia.

In the early days of the last siege of Constantinople in 1453, Ottoman forces captured Therapia - then a minor Byzantine fortification. Some 40 surrendered soldiers were impaled.

Tarabya was where the foreign embassies had their summer houses during the Ottoman period, and today the area has several European consulates.

Sultan Selim II used to enjoy eating fish in this area and asked his grand vizier, Sokollu Mehmed Pasha, to build a palace for him where he can spend the summers. It is believed that Sultan Selim II called his palace Tarabiye which means "pleasure", and the name of the neighbourhood (Tarabya) has derived from the name of this palace.

Standing on roots from 15th Century, bazaar holds its reputation as one of the eldest covered bazaars in the world.

Informacion Adicional
"Confirmation will be received within 48 hours of booking, subject to availability"
"Not wheelchair accessible"
"Stroller accessible"
"Near public transportation"
"Most travelers can participate"
"This tour/activity will have a maximum of 10 travelers"
"Face masks required for travelers in public areas"
"Face masks required for guides in public areas"
"Face masks provided for travelers"
"Social distancing enforced throughout experience"
"Gear/equipment sanitized between use"
"Guides required to regularly wash hands"
"Regular temperature checks for staff"
"Paid stay-at-home policy for staff with symptoms"