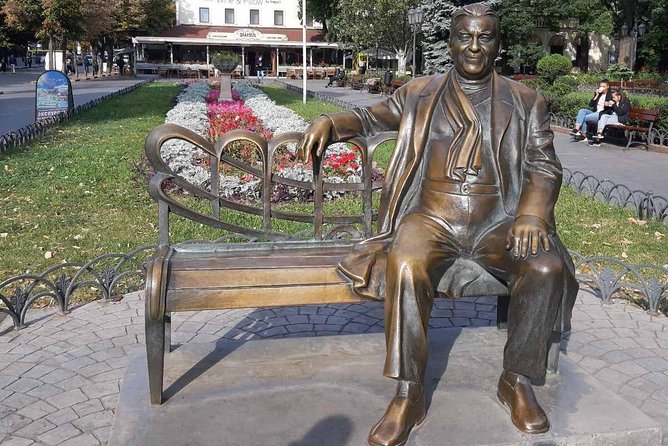 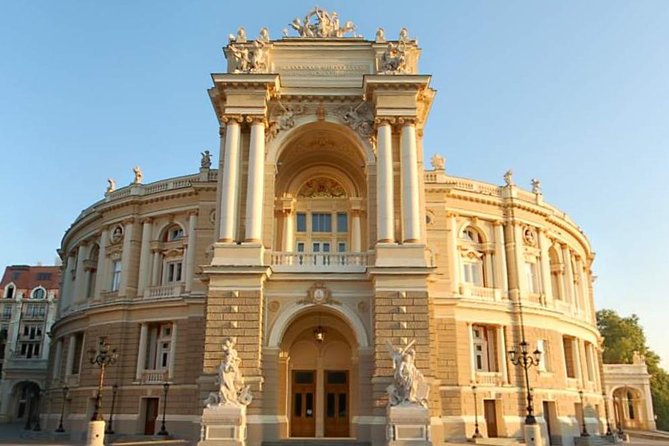 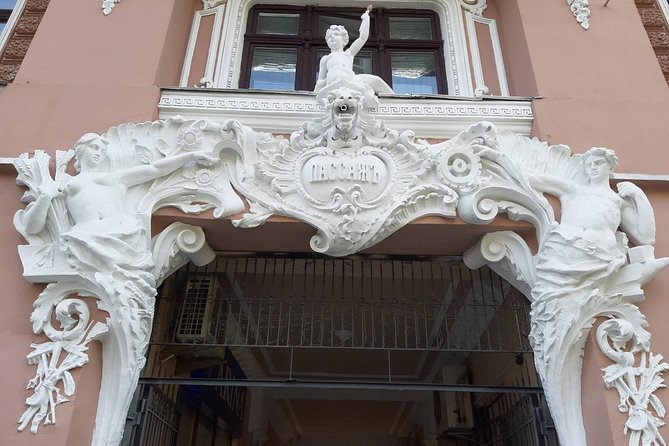 Explore Odessa on a 3-day small-group tour that includes accommodation with breakfast, comprehensive city tour and round-trip airport transfers. Visit all the most popular travel attractions of the city and hear many interesting facts from an expert local guide. Discover such landmarks as splendid Odessa Opera House and famous Potemkin Steps, luxury Arcadia district and colorful Deribasovskaya Street. Enjoy the atmosphere of the city and visit its restaurants and museums in your free time.

No meals included on this day.
Accommodation included: Overnight at your selected 3, 4 or 5 star hotel in Odessa

Stop At: Deribasovskaya Street, Odessa Ukraine
Stroll down the main street of the city and enjoy its festive ambience. Deribasovska is famous for a variety of cozy restaurants, shops and cafés.
Duration: 20 minutes

Pass By: Odessa National Academic Opera and Ballet Theater, Chaikovskogo Lane, 1, Odessa 65026 Ukraine
Discover an amazing architectural masterpiece of the end of 19th century. Odessa Opera is one of the most beautiful theaters in Europe. Learn interesting facts from its history from your local guide.

Stop At: Primorsky Boulevard, Primorsky Blvd, Odessa Ukraine
Walk through a picturesque boulevard with chestnuts and plane trees growing in the middle. There is a wonderful ensemble of Classicism-style mansions on the one side of the street, while the other overlooks the Black Sea.
Duration: 15 minutes

Stop At: Passage, Deribasovskaya str. - Transafiguration str, Odessa Ukraine
Contemplate splendid architecture of Odessa Passage – luxurious gallery with glass roof and elegant interior. It is one of the most beautiful patios of the city with various boutiques.
Duration: 15 minutes

Stop At: City Garden, De Ribas Street, Odessa Ukraine
Visit the oldest park of Odessa, beloved by its citizens. The highlight of the City Garden is a beautiful fountain that operates in the evenings.
Duration: 15 minutes

Stop At: Potemkin Stairs, Primorsky Boulevard, Odessa 65000 Ukraine
No visit of Odessa would be complete without seeing its famous symbol – Potemkin Steps. Built in the end of 19th century, it counts with 192 steps that can lead you to the Port.
Duration: 10 minutes

Stop At: Arcadia district, Odessa Ukraine
Arcadia is a modern and vibrant district that never sleeps. Luxury boutiques and top-notch beaches and restaurants attracts locals and guests of the city.
Duration: 20 minutes

Pass By: Statue of the Duc de Richelieu, Prymorskyi Boulevard, 7, Odessa 65000 Ukraine
Discover the monument to the founder of the city, the first monument erected in Odessa. Learn interesting facts about Duke de Richelieu personality from your guide.

Pass By: The Odessa Port, Odessa Ukraine
Enjoy the view of Odessa Port from the top of Potemkin Steps. It’s a big complex with ship docks, spacious embankment and hotel.

Stop At: Teatralnaya Square, Odessa Ukraine
Discover a beautiful square in front of the Opera and Ballet Theater and get acquainted with important pages of history of the city.
Duration: 15 minutes

Pass By: Monument to the 12th Chair, Deribasovskaya St, Odessa Ukraine
Don’t miss a chance to take a picture sitting on bronze chair from a famous novel. Get to know its history from your guide.

Pass By: Monument to Catherine the Great and Founders of Odessa, Katerynyns'ka Square, 5, Odessa 65000 Ukraine
Located on a beautiful square, this eye-catching monument is one of the main sight of Odessa. It has a complicated history, as it was removed in times of the soviet union and restored only in 2007.

Pass By: Monument to L. Utesov, Derybasivska Street, Odessa 65000 Ukraine
Take a sit on a bench next to a famous singer Leonid Utesov. It’s one of the favorite monuments of locals.

Pass By: Flat House House-Wall or Witch House, Vorontsovskiy ln, 4, Odessa Ukraine
One-of-a-kind house, which attracts all the visitors of Odessa with its unusual architecture. An optical illusion makes you believe that the building consists only of one wall, however if you approach it, you can reveal its secret.

Pass By: Odessa, Odessa, Odessa Oblast
Following breakfast at your hotel and check-out, your driver will transfer you th Odessa airport, port, railway or bus station.

Informacion Adicional
"Confirmation will be received within 48 hours of booking, subject to availability"
"Hotel name and address will be informed additionally, after the confirmation of availability"
"Not wheelchair accessible"
"Most travelers can participate"
"Check-in time at the hotel is 2pm, checkout time is 12pm"
"This tour/activity will have a maximum of 10 travelers"