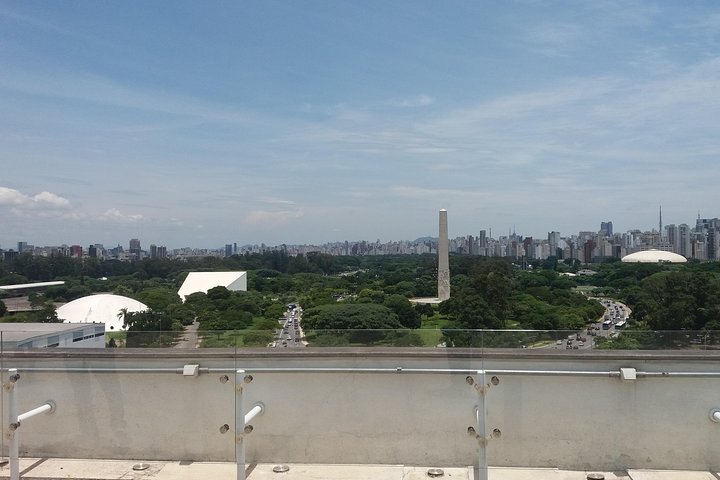 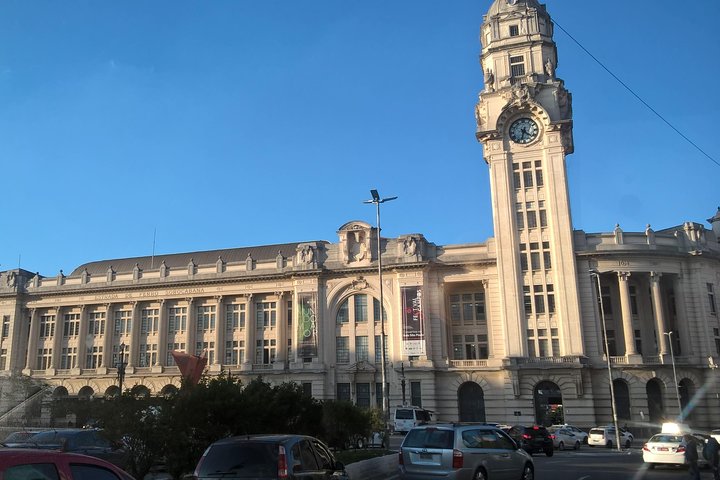 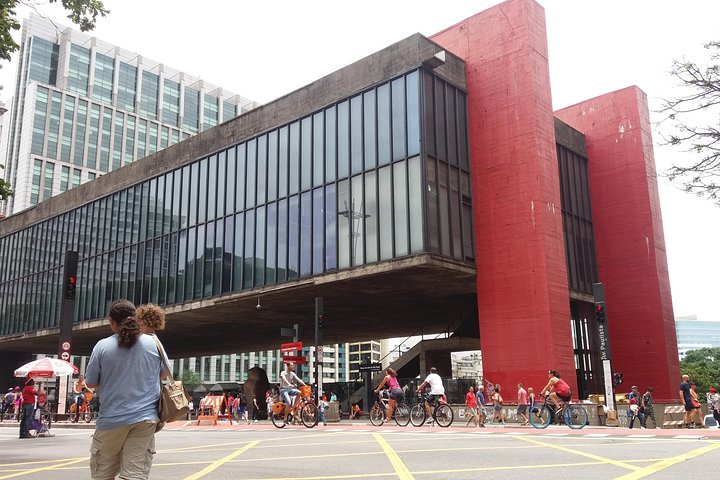 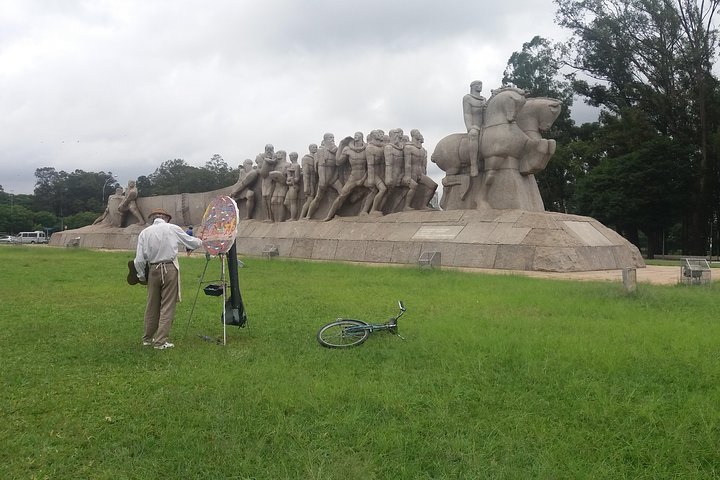 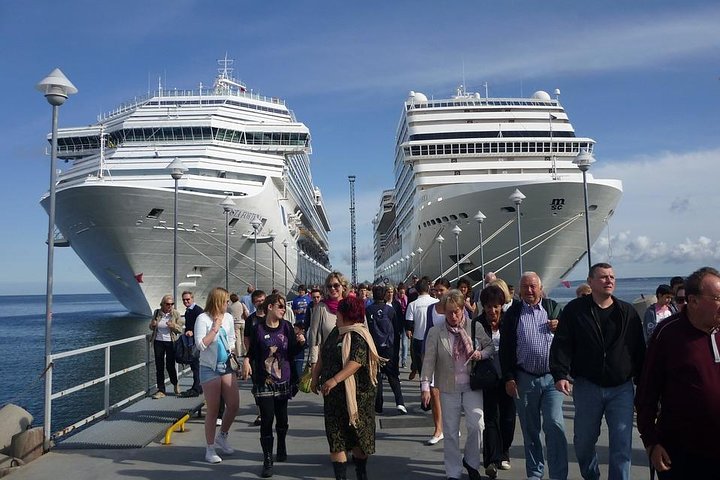 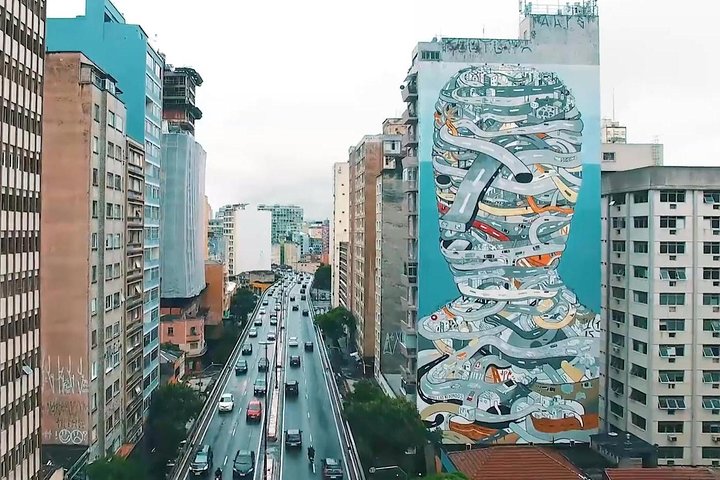 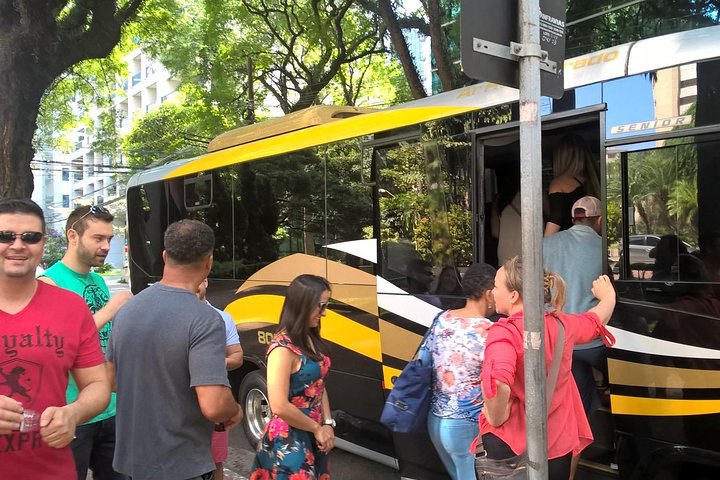 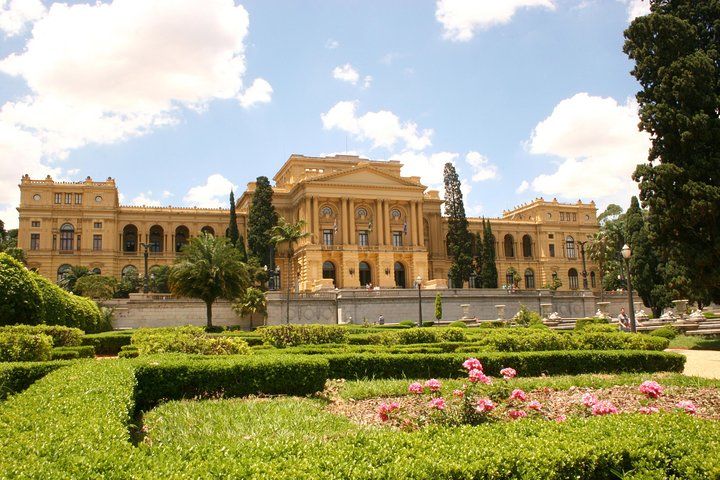 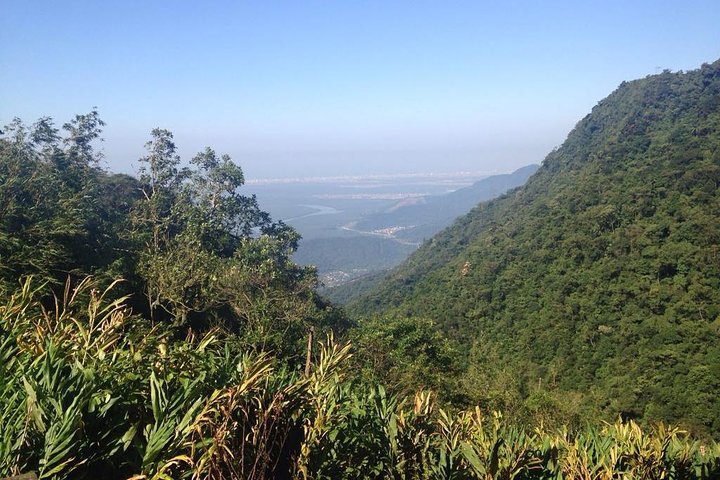 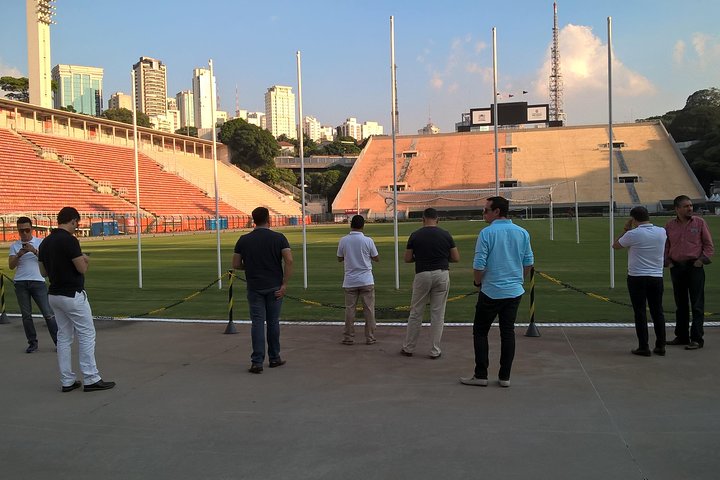 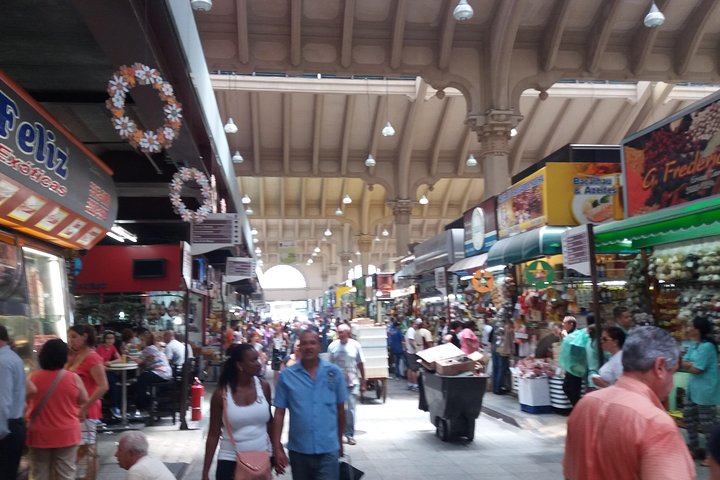 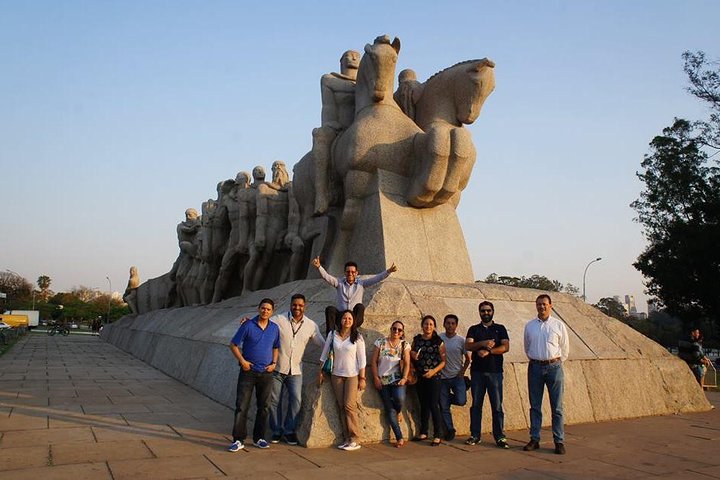 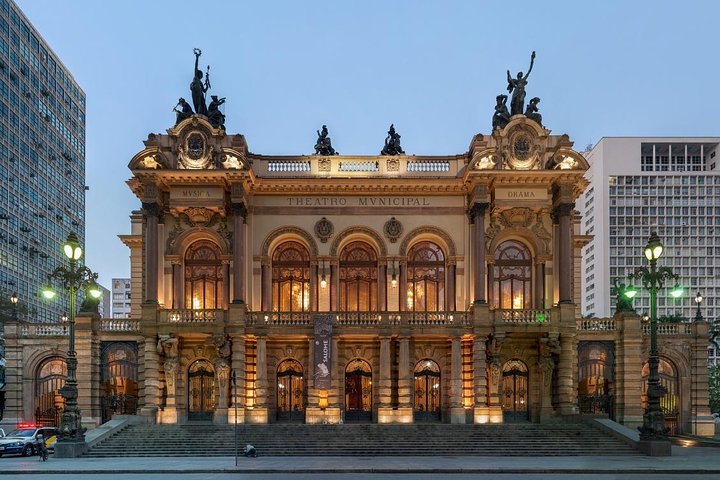 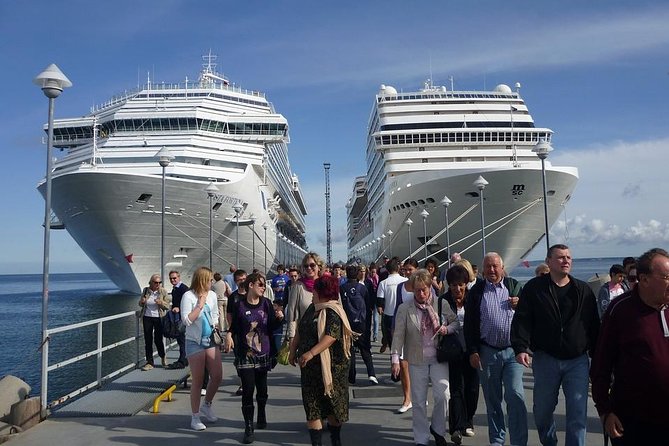 While in the Santos Cruise Terminal why not take a Short Excursion to visit the  São Paulo City!

The trip from Santos to São Paulo (70Km Aprox.)  is on an amazing highway through an exuberating piece of the Atlantic Rain Forest.

Ibirapuera is one of Latin America's largest urban parks, together with Chapultepec Park in Mexico City and Simón Bolívar Park in Bogota, and its iconic importance to São Paulo is often internationally comparable to that of Central Park to New York City. The park is often cited as one of the most vibrant and photographed parks in the world,[7][8] as together with its large area for leisure, jogging and walking, it hosts a vivid cultural scene with museums, a music hall, and popular events such as São Paulo Fashion Week, congresses and trade shows. It is claimed to be the most visited urban park in South America, is listed as one of the best parks in the world,[9] and is described as "a green oasis at the heart of a concrete jungle".[10]

The Museu Paulista of the University of São Paulo (commonly known as Museu do Ipiranga) is a Brazilian history museum located near where Emperor Pedro I proclaimed the Brazilian independence on the banks of Ipiranga brook in the Southeast region of the city of São Paulo, then the "Caminho do Mar," or road to the seashore. It contains a huge collection of furniture, documents and historically relevant artwork, especially relating to the Brazilian Empire era.

The most famous work of art in the collection is the 1888 painting Independência ou Morte (Independence or Death) by Pedro Américo.

A few months after the Brazilian Declaration of Independence, people started to suggest a monument on the site where the declaration took place, although they were not sure about what sort of memorial construction to build. In 1884, Italian architect Tommaso Gaudenzio Bezzi, who was hired to develop the project, chose to build an eclectic-styled construction similar to the French Palace of Versailles with impressive and perfectly manicured gardens and fountain.

The Monument to the Independence of Brazil (Portuguese: Monumento à Independência do Brasil) is granite and bronze sculpture in São Paulo, Brazil. It is also known as the Ipiranga Monument (Portuguese: Monumento do Ipiranga) or the Altar of the Fatherland (Portuguese: Altar da Pátria). The monument is located on the banks of the Ipiranga Brook, in São Paulo, on the historic site where the later Emperor Dom Pedro I of Brazilproclaimed the independence of the country on September 7, 1822.[1][2]

The monument was designed and built by the Italian sculptor Ettore Ximenes (1855–1926) and the Italian architect Manfredo Manfredi (1859–1927) to celebrate the first centenary of the Brazilian Independence.

The Municipal Market of São Paulo (Portuguese: Mercado Municipal Paulistano, Mercado Municipal de São Paulo) is a large public market in São Paulo, Brazil.[1][2] It was designed by the architect Francisco Ramos de Azevedo and inaugurated on January 25, 1933 as a wholesale and retail post specializing in fruits, vegetables, cereals, meats, spices and other food products. The market is located in the Mercado neighborhood, a name that references the market, in the historic center of São Paulo. It is located near the Tamanduateí River in the old Várzea do Carmo, a floodplain of the river now primarily used as Dom Pedro II Park. The market was formally named the Mercado Municipal São Paulo in 1995.[3] It is commonly known in São Paulo as the Mercadão, or "big market", and a noted meeting point for resident São Paulo and one of the most visited tourist spots in the city

The São Paulo See Metropolitan Cathedral --"See" and "cathedral" mean "seat" and therefore the ecclesiastical authority of a bishop or archbishop (Portuguese: Catedral Metropolitana, or Catedral da Sé de São Paulo) is the cathedral of the Roman Catholic Archdiocese of São Paulo, Brazil. As of 2013 the Metropolitan Archbishop of the archdiocese was Cardinal Odilo Pedro Scherer. Its construction, in Neo-Gothic style, began in 1913 and ended four decades later. It was ready for its dedication on the 400th anniversary of the foundation of the then humble villa of São Paulo by Chief or Cacique Tibiriçá and the Jesuit priests Manuel da Nóbrega and José de Anchieta. Despite having a Renaissance-styled dome, the São Paulo Metropolitan Cathedral is considered by some to be the 4th largest neo-gothic cathedral in the world.

Informacion Adicional
"Confirmation will be received at time of booking"
"Wheelchair accessible"
"At time of booking, Cruise ship passengers must provide the following information at time of booking: ship name, docking time, disembarkation time and re-boarding time"
"Refunds will not be issued if tour/activity is missed due to late or non-arrival of cruise ship"
"May be operated by a multi-lingual guide"
"A minimum of 2 people per booking is required"
"The duration of transfers (From Santos To SP 1h30min are approximate), the exact duration will depend on the time of day and traffic conditions , but we are always monitoring and with straight contact with the cruise terminal to avoid any unforeseen travel"
"Stroller accessible"
"Near public transportation"
"Infants must sit on laps"
"Infant seats available"
"Transportation is wheelchair accessible"
"Most travelers can participate"
"This tour/activity will have a maximum of 15 travelers"
"Face masks required for travelers in public areas"
"Face masks required for guides in public areas"
"Hand sanitizer available to travelers and staff"
"Social distancing enforced throughout experience"
"Regularly sanitized high-traffic areas"
"Gear/equipment sanitized between use"
"Transportation vehicles regularly sanitized"
"Guides required to regularly wash hands"
"Paid stay-at-home policy for staff with symptoms"