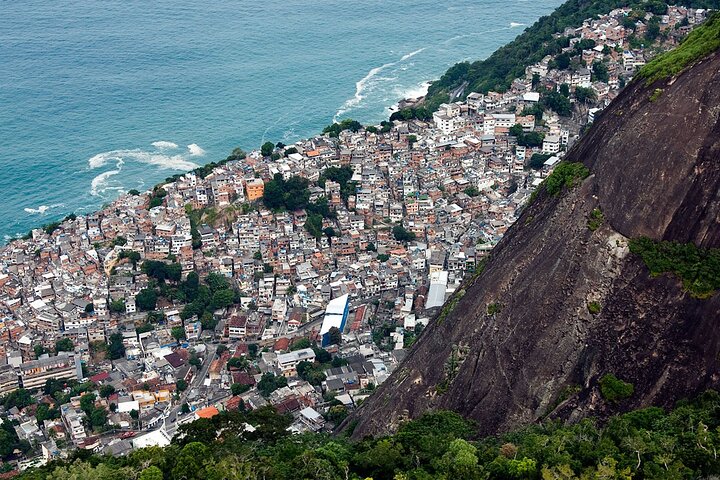 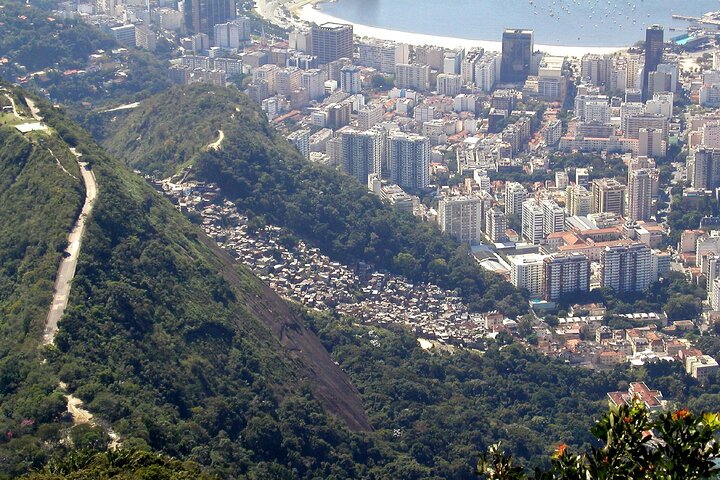 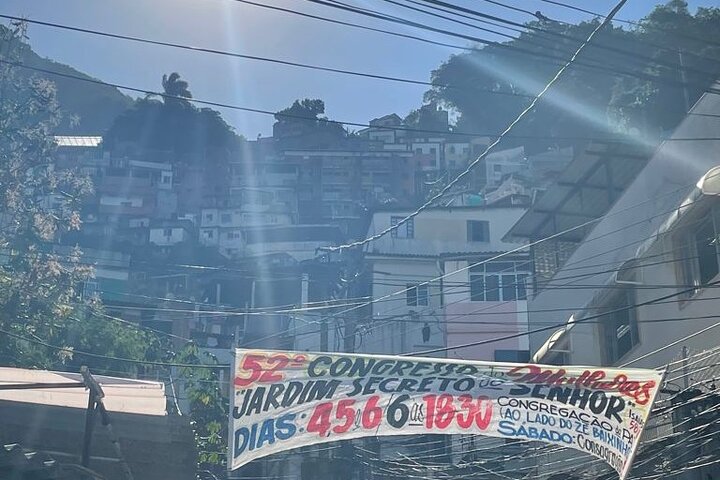 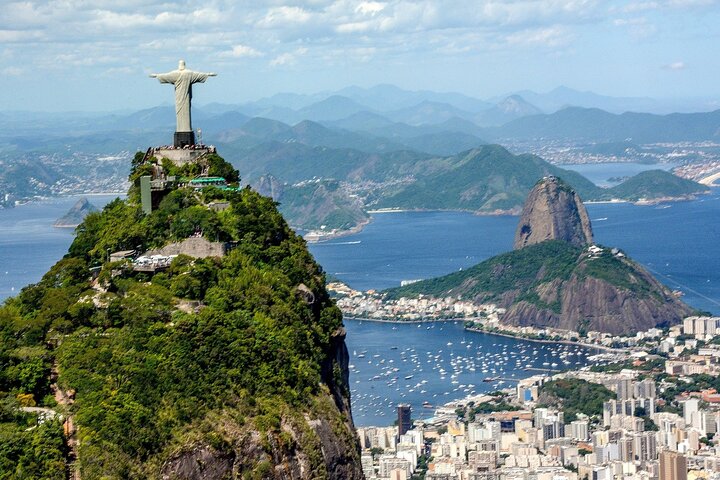 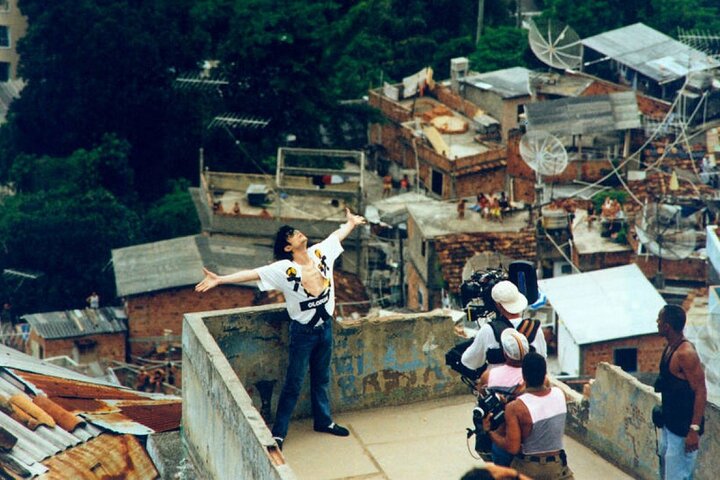 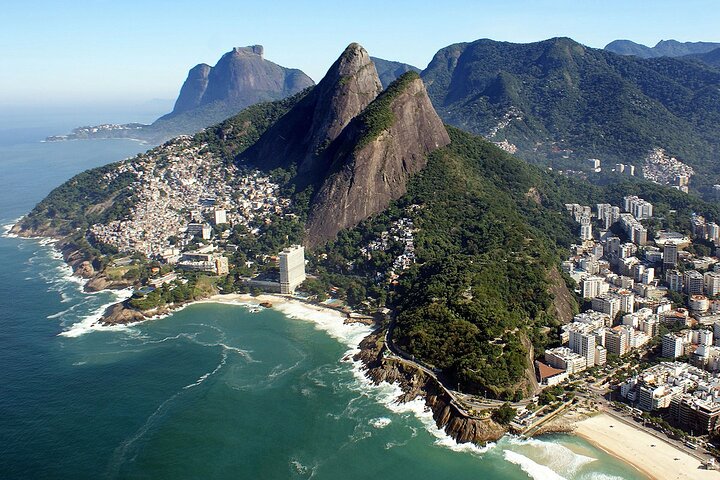 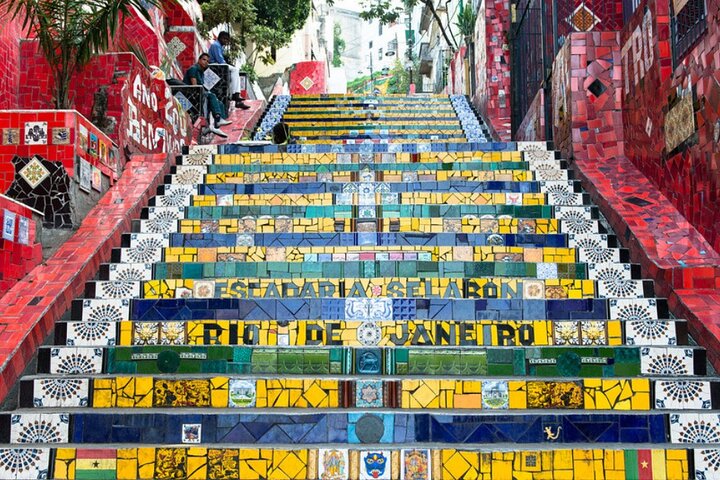 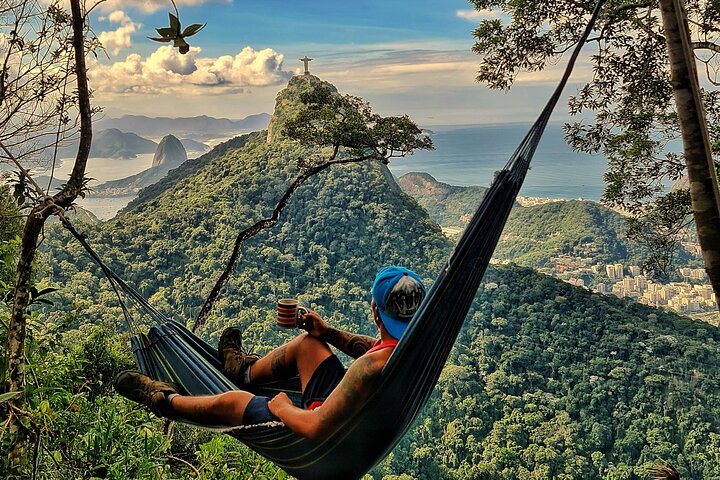 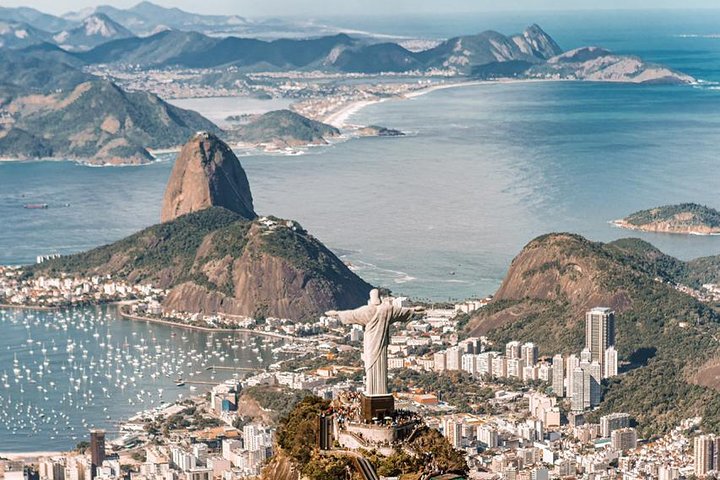 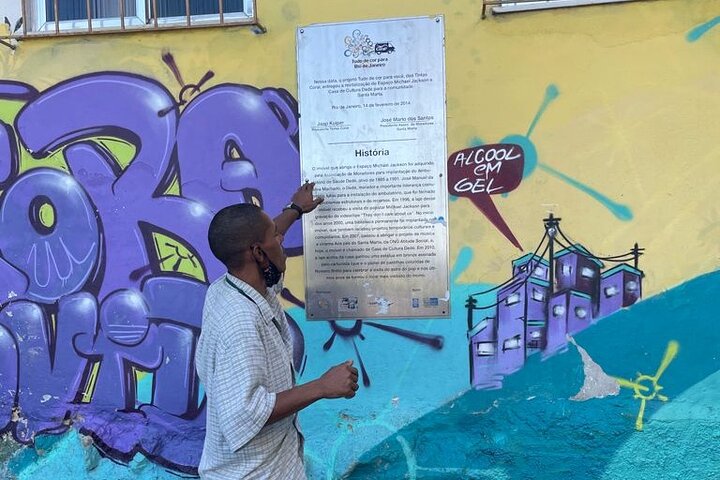 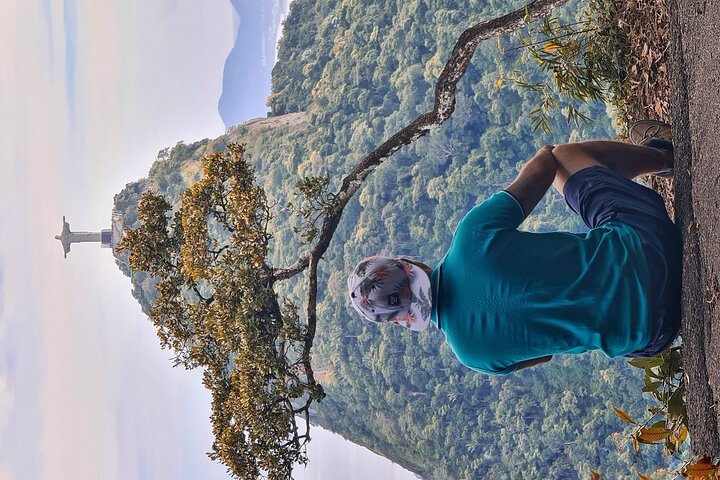 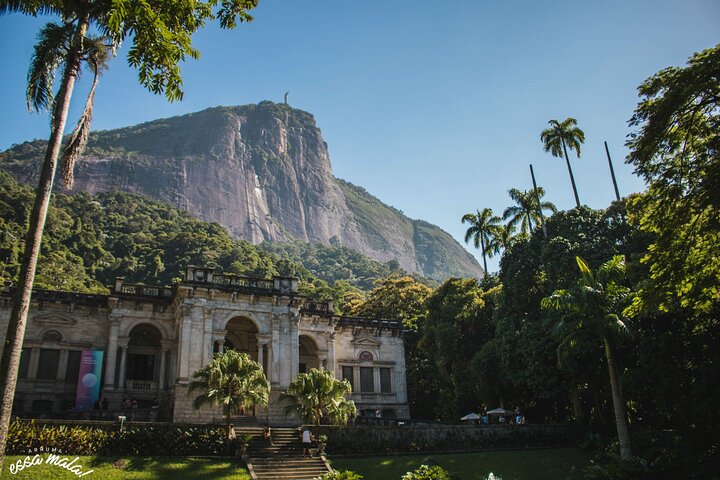 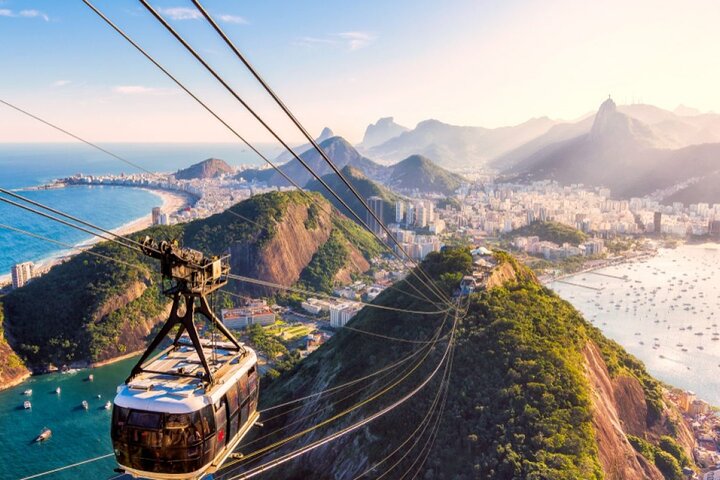 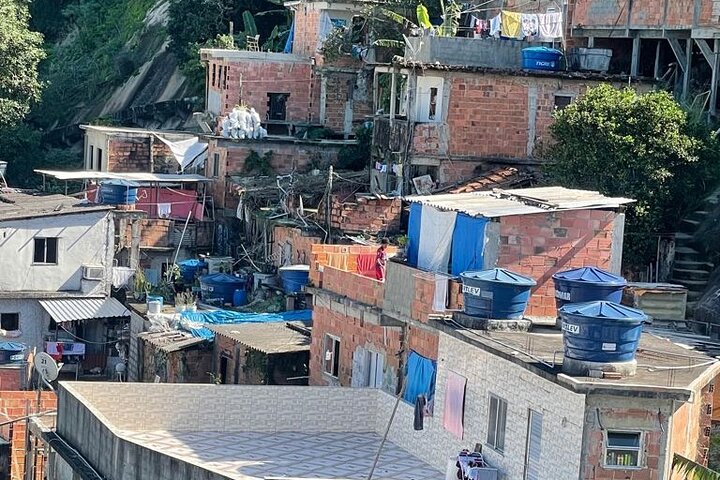 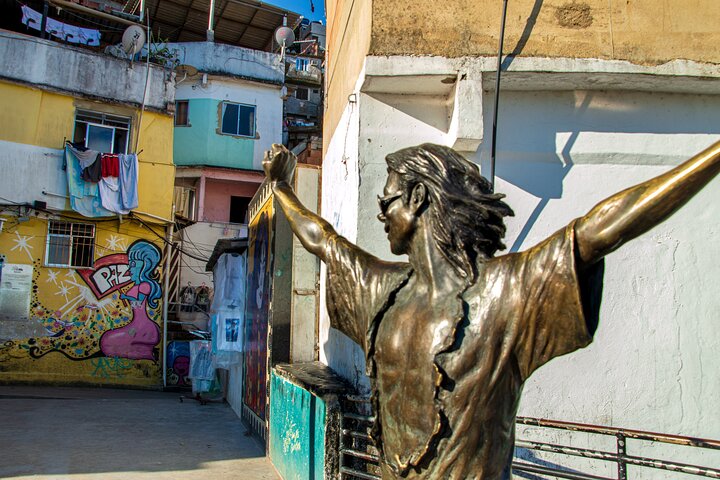 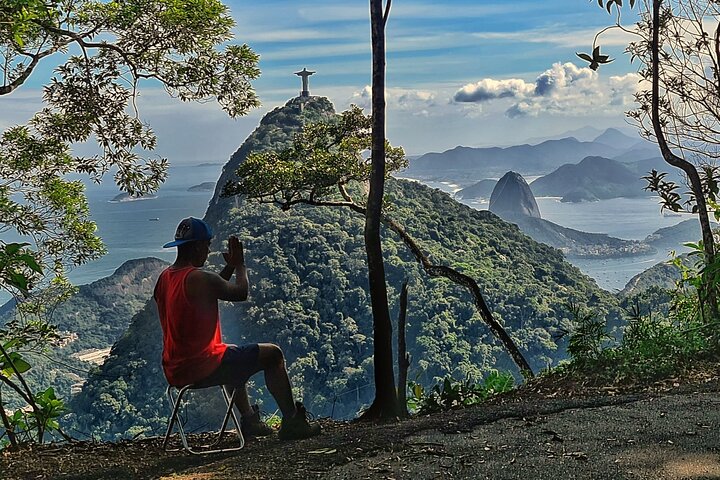 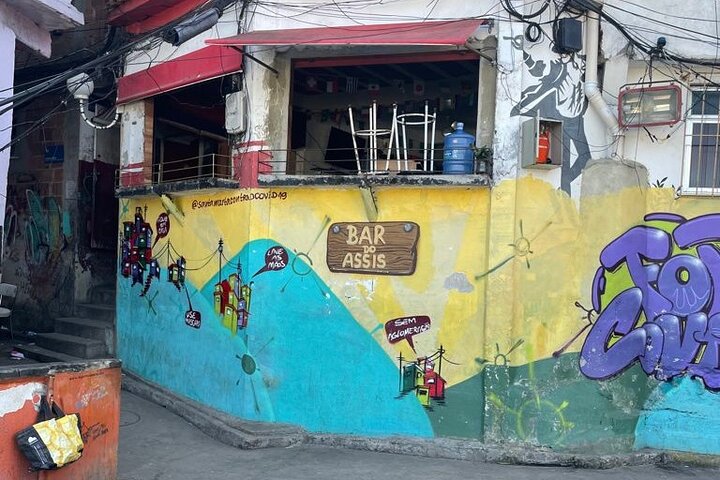 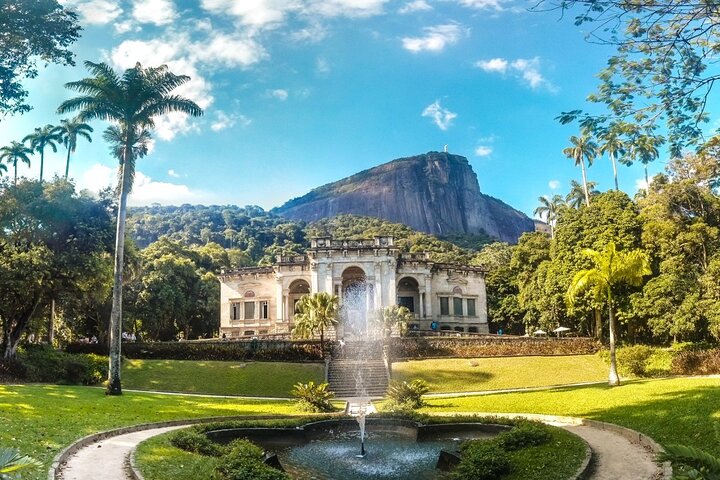 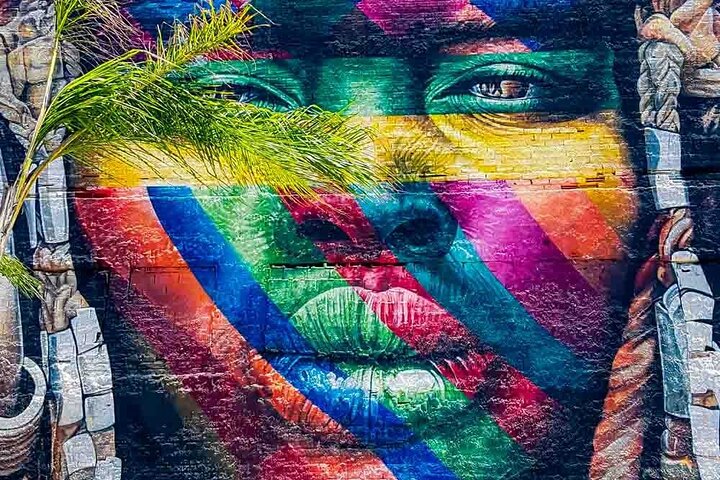 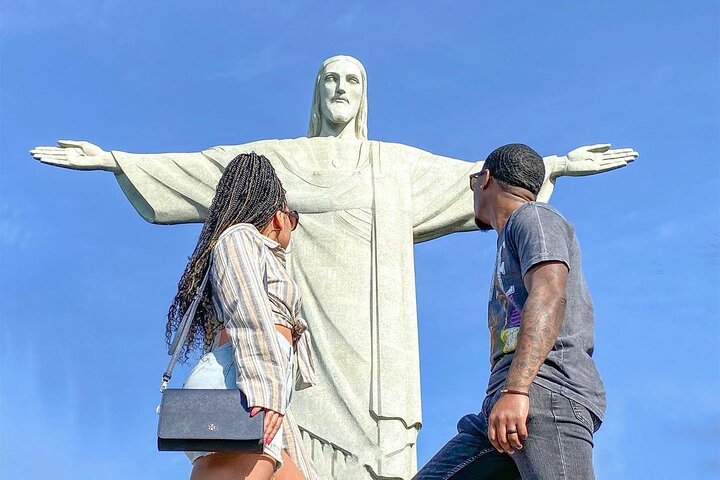 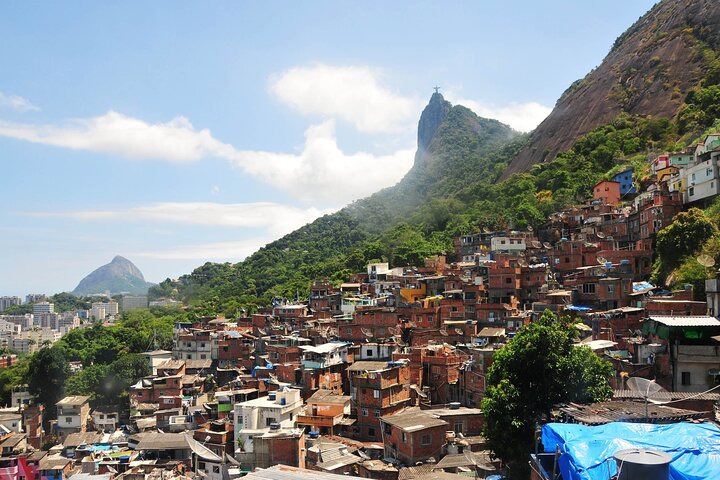 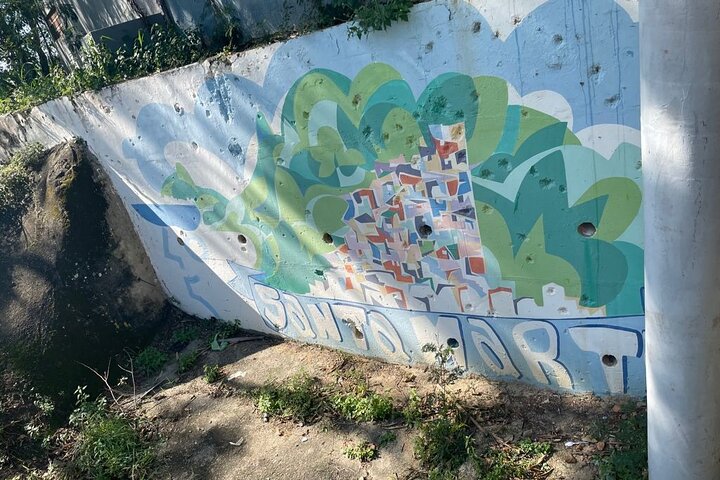 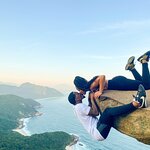 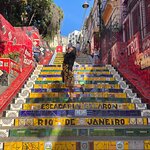 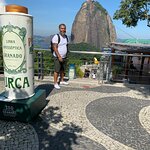 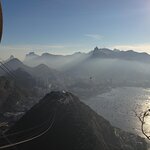 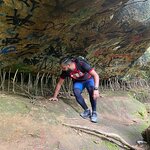 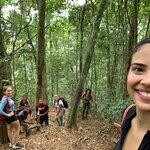 Private and customized tour of the city of Rio.

See Rio's most important sights during this 8-hour tour with an experienced local guide. You will purchase tickets for Sugarloaf and Christ the Redeemer at the entrance.
• Take the cable car from Urca to the top of Sugarloaf Mountain for spectacular views of Rio's landscapes.
• Drive through the Tijuca Forest to the Paineiras Visitors Center, then ride to the top of Corcovado. See Christ the Redeemer and more spectacular views of the city and Guanabara Bay.
• Visit the historic Parque Lage and Botanical Gardens at the foot of Corcovado Mountain.
• Enjoy Brazilian cuisine for lunch.
• Spend a while in the famous bohemian Lapa neighborhood where you will see the iconic Selaron Staircase and the Arches of Lapa, an 18th century aqueduct.
• Walk down the Olympic Boulevard, passing the largest street art mural in the world painted by Eduardo Kobra, and visit Maua Square, which offers beautiful views of Guanabara Bay, Rio's Museum of Art, the Museum of Tomorrow, and other points of interest.

Sugarloaf Mountain is a peak situated in Rio de Janeiro, Brazil, at the mouth of Guanabara Bay on a peninsula that juts out into the Atlantic Ocean. Rising 396 m (1,299 ft) above the harbor, its name is said to refer to its resemblance to the traditional shape of concentrated refined loaf sugar. It is known worldwide for its cableway and panoramic views of the city and beyond

Originating from an old sugar mil, the park makes part of the historic memory of the city. In 1957, it was tumbled by the “Instituto do PatrimônioHistórico e ArtísticoNacional” (IPHAN) like as historical and cultural heritage of the city of Rio de Janeiro.

Projected in 1840 by the the English landscaper John Tyndale, the wonderful garden with Romantic and European style share the attention with the native forest of Mata Atlântica. Also highlight imperial palm tree, the rivers and artificial island, a part from caves spread over the park and the inlaid aquarium on the walls with a lot of fishes. So wanted by families, especially on the weekends, Parque Laje have a good structure good structure for the amusement of children with toys and a large outdoor area. Picnic is very common the park.

The staircase, which is between Rua Joaquim Silva, in Lapa, and Rua Pinto Martins, in the Santa Teresa neighborhood, is just five minutes from Arcos da Lapa. A work by Chilean artist Jorge Selarón, the staircase brings together several tiles from various parts of Brazil and the world. All colorful, it was the scene of U2 and Snoop Dogg clips, in addition to being a place chosen by locals and thousands of city visitors for photographs.

The Port Region experienced its peak and decline in just over a century. From a fishing village to the main port in the country, the area was also the gateway and home for the slaves, giving the region the nickname “Little Africa”, the number of blacks who lived there being such a big one. From 2010, with the beginning of the works of the Porto Maravilha project, which revitalizes the urban area while preserving the history of this region, several historical points were rediscovered.

From Jardins do Valongo to Cais da Imperatriz, through modern projects such as the Museum of Art of Rio and the new Museum of Tomorrow, the project developed the tourist and economic potential of the region, forming a legacy for future generations. In this context, we selected some points of tourist interest in the Port Region of Rio de Janeiro, forming a great historical and cultural itinerary of this important region of the city.

The Mirante Dona Marta literally translates to ‘lookout,’ and visitors to the site will get just that — an incredible view of some of Rio de Janeiro’s best sights, often without the crowds. Standing there one can see the long stretches of lush forest and white sand beach below, and even take in the famous sights of the Christ the Redeemer statue and Sugarloaf Mountain.

The area functions as a helipad and observation point, with panoramic views of Guanabara Bay and Copacabana. At 1,200 feet (364 meters) high, it provides excellent sunrise and sunset vistas and photo opportunities of the natural surroundings and the city below. Many who know Rio well cite it as their favorite viewpoint.

Rocinha is a favela located in the South Zone of the municipality of Rio de Janeiro, Brazil. It stands out for being the largest favela in the country.

The Pedra Bonita ramp is located within the Tijuca National Park area.
Good option to visit.

Located in the heart of Rio de Janeiro, with access through the North, South, and West Zones, Tijuca National Park (Parna Tijuca or PNT) protects the largest man-replanted urban forest in the world, spanning 3,953 ha of Atlantic Forest. It is the most visited National Park in Brazil, receiving more than three million visitors per year, including Brazilians and foreigners of all ages.

Want a great place to cool off in Rio de Janeiro besides the beaches- Know that there are many waterfalls in the city and some are not so well known. This is the case of Serra do Mendanha Waterfall.

In 1990, Jorge Selarón began to renovate some steps of the staircase, which was in a poor state of repair and which passes in front of his house. At first, the neighbors mocked the bizarre color combinations as he mixed the steps with bits of blue, green and yellow tiles, the colors of the Brazilian flag. It started as a hobby for his main passion, painting, but soon became an obsession. Selarón was almost always broke and then sold paintings to finance his venture. It was a long and tiring work, but the artist went on with the work and finally covered the entire set of tiled, ceramic, and mirrored steps.

Presidente Costa e Silva Bridge, popularly known as the Rio – Niterói Bridge, is a bridge that crosses Guanabara Bay in the state of Rio de Janeiro, Brazil. It connects the municipalities of Rio de Janeiro and Niterói. Its name is in honor of Arthur da Costa e Silva, president during the military regime in Brazil (1964–1985) who gave the order for the construction of the structure.

Copacabana Fort is located at the tip of Copacabana, at the end of the beach and neighborhood of the same name, in the city of Rio de Janeiro.

The Telegraph Stone Trail is one of the most sought-after trails in Rio de Janeiro and is located in the Pedra Branca State Park.

The CCBB is a cultural center that consists of exhibition rooms, three theaters, a library, cinema, and a video room. It is housed in an art deco-style building located in what used to be the financial district of Rio de Janeiro.

The cultural center jerusalem is a site that houses the first-century jerusalem model d. C. An incredible place for anyone who wants to learn about the history of Israel and Jewish culture.

Ruins Park is a place full of stories to tell. The place was a house that served as a meeting point during Brazilian modernism, with incredible appearances such as Tarsila do Amaral and Villa Lobos. The ruins blend with a restoration architecture with glass and metal, making the place even more peculiar.

Ruins Park is a place full of stories to tell. The place was a house that served as a meeting point during Brazilian modernism, with incredible appearances such as Tarsila do Amaral and Villa Lobos. The ruins blend with a restoration architecture with glass and metal, making the place even more peculiar.

Originally from an old sugar mill, the park is part of the city's historical memory. In 1957, it was listed by the Institute of National Historical and Artistic Heritage (IPHAN) as the historical and cultural heritage of the city of Rio de Janeiro.

The Rio de Janeiro Municipal Market - CADEG occupies an area of 100,000 m². With 706 stores and rooms, it has several segments of commerce and services with national and imported products, such as cod, cereals, vegetables, fresh fruits, pulp, dairy, beverages, disposables and decoration, standing out as a market reference. wholesaler for food professionals since its inception. In addition, it is known as the largest flower distributor in the state, selling an average of half a million flowers per month. In 2018, CADEG was listed as a Public Official Heritage of Rio de Janeiro.

Famous for its crescent-shaped beach, Copacabana is one of Rio's liveliest neighborhoods. It attracts locals and tourists for uninterrupted activities on its sands and boardwalk. Among the skyscrapers overlooking the beach are the Art Deco-style Copacabana Palace hotel and the lush Copacabana Fort, which houses a military museum. Farther into the neighborhood, laid-back cafes and casual bars fill the quiet streets.

Informacion Adicional
"Confirmation will be received at time of booking"
"Not wheelchair accessible"
"Stroller accessible"
"Most travelers can participate"
"This experience requires good weather. If it’s canceled due to poor weather, you’ll be offered a different date or a full refund"
"This is a private tour/activity. Only your group will participate"
"Face masks required for travelers in public areas"
"Face masks required for guides in public areas"

We can pick you up and drop you off anywhere in the city of Rio de Janeiro.