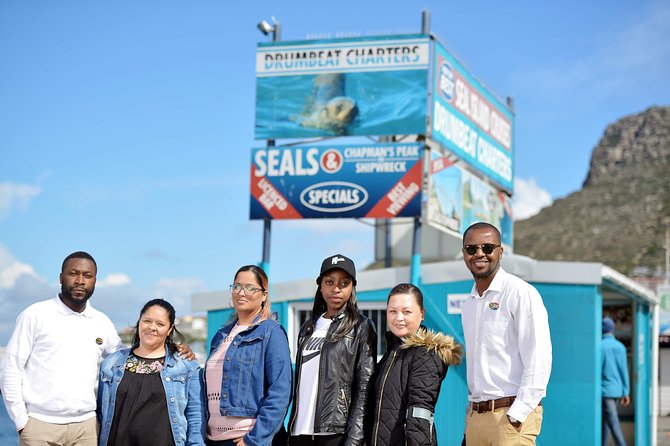 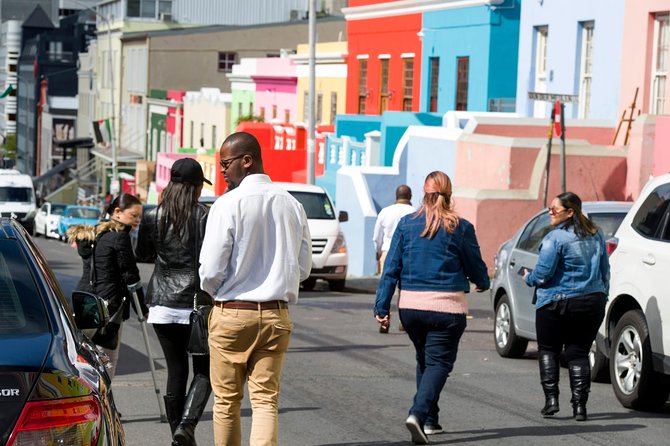 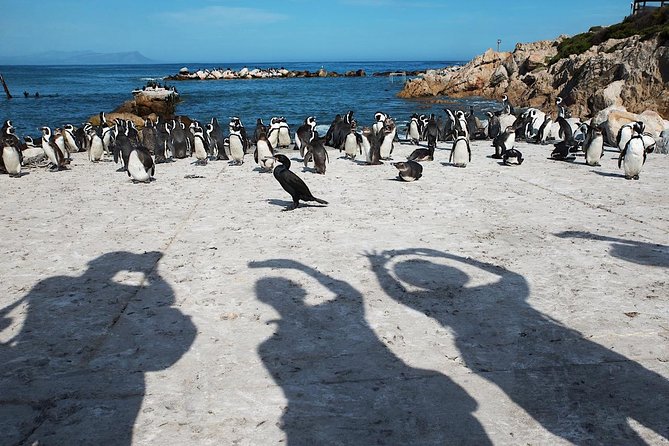 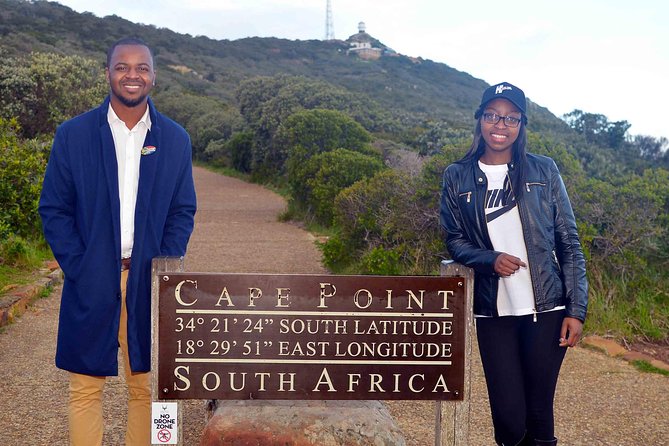 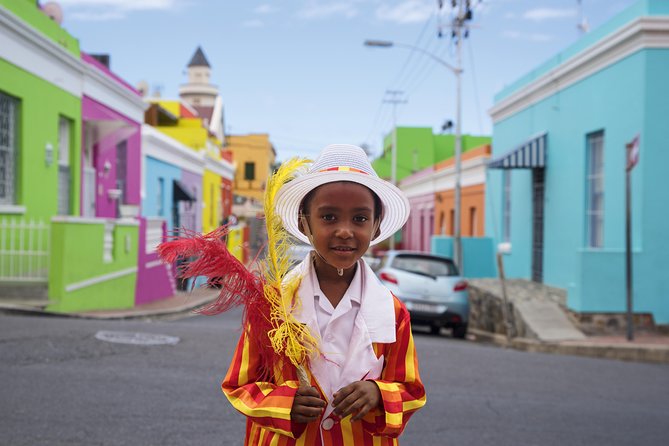 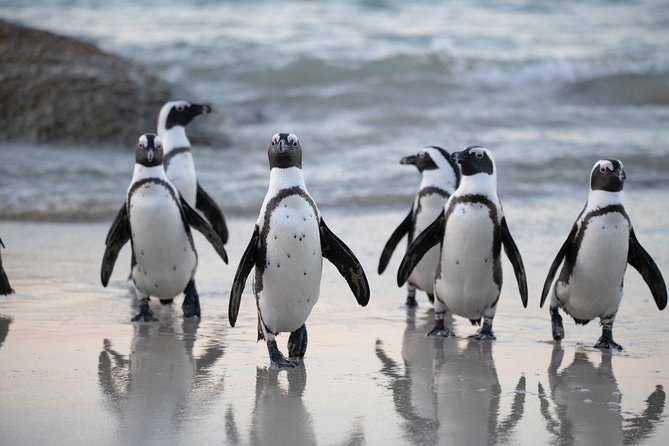 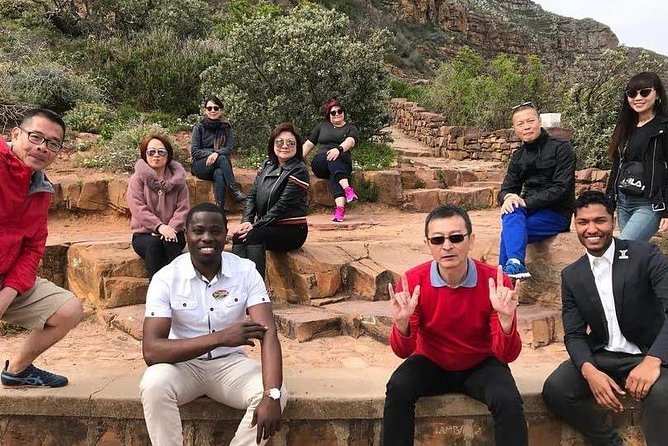 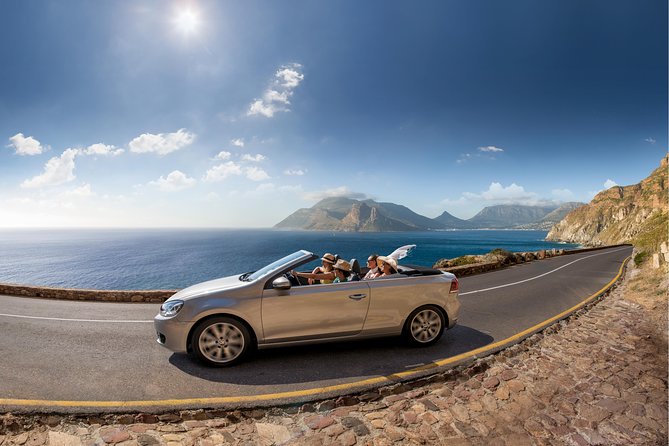 Embark on a Full Day Cape Peninsula Small Group Shared Tour affording you the opportunity to see all the key sightseeing attractions that Cape Town has to offer and personal guided interaction with your tour guide/driver in a scheduled 8-10 hour excursion.

Highlights you will experience on this tour will be the Bo-Kaap, the coastal Atlantic Seaboard passing through Bantry Bay, Clifton, Camps Bay and Llandudno, Hout Bay (the Gateway to Seal Island), Chapman's Peak drive, Boulder's Penguins colony, Cape of Good Hope, Cape Point and Muizenberg.

This is truly one of the best ways to see some of the major highlights Cape Town has to offer in a fun-filled small group tour.

Pick up will be communicated to you the day before your tour. This will be between 7:30 and 9:00 am. After pick up at accommodation in Cape Town we will travel through the city and see historical monuments and buildings.

From there we will stop in the Bo-Kaap (Cape Malay Quarter) for a photo opportunity with the colorful houses, which carries great historical significance. You may even have a chance to greet some of the locals if they are in sight.

Situated at the foot of Signal Hill, on the fringe of the city center, the Bo-Kaap’s origins date back to the 1760s when numerous rental houses were built and leased to slaves. These people were known as Cape Malays and were brought from Malaysia, Indonesia and the rest of Africa to work in the Cape.

The choice of color is said to be attributed to the fact that while on the lease, all the houses had to be white. When this rule was eventually lifted, and the slaves were allowed to buy the properties, all the houses were painted bright colors by their owners as an expression of their freedom.

We take a scenic drive along the Atlantic Seaboard with the mountains on one side and the ocean on the other, passing through Clifton, Camps Bay and Llandudno

We stop at Maiden's Cove for a photo opportunity with magnificent views of the Twelve Apostles as a backdrop.

This cove is one of the best places in Cape Town to take panoramic photos of the Ocean, Camps Bay Beach combined with the views of Table Mountain, Lion's Head and the beautiful suburbs of Clifton, Camps Bay etc... We call this the Kodak moment.

Our journey continues along the picturesque coastline and stopping in Hout Bay Harbour. Here, guests have the option to either take a boat to Seal Island to view the Seals or visit the market for some shopping.

The best fish & chips in Cape Town can be purchased as a takeaway or sit down at Mariner's Wharf Restaurant at your own account. Kindly ask your tour guide for more details.

Board an optional ferry to Duiker Island to view the seals colony. The entire boat trip duration lasts for 45-minutes and the skipper will circle around the Island where the Seals are parading and swimming. We do not recommend this activity when it is windy or raining because the oceans tend to be rough, making it an unpleasant experience.

We continue our coastal journey and stop in Noordhoek, with the breathtaking views of Noordhoek and Long Beach beneath us. Travellers will have the option to enjoy some of the best coffee brewed in Cape Town at the Village Roast for their own account.

Departing from Hout Bay, we drive along Chapman's Peak and stop at the viewpoint for spectacular photos. It is little wonder that Chapman's Peak is one of the most scenic routes in the world.

A quick stop at the Ostrich Farm that is run by a family from 1996. This is a breeding farm that accommodates 40 breeding birds.

Our tour culminates with the Cape of Good Hope and Cape Point Lighthouse.

Here we will explore the Dias & Vasco Da Gama, Crosses. These two gentlemen were the first early Europeans who arrived in Cape Town around 1487 & 1495.

Should you wish to hike, please speak to your guide. Kindly put on comfortable walking shoes, bring sun block and a jersey or jacket, hat.

The entire tour will be alongside your personal private tour guide in a small group tour.

From the Cape of Good Hope we will have the option to either take a short hike to Cape Point or take the Funicular. Lunch is recommended at either Two Oceans restaurant for a sit down meal or at the informal eatery for a take out.

Here we will also explore the most south western point of Africa, known as the Cape Point, where the cold Benguela from Atlantic Ocean, meets the warm Agulhas current of the Indian Ocean. We will explore the lighthouse, etc.

Our next stop will be the Penguins colony in Boulders beach, where your guide will escort you to the viewing point to see some of the 2500 breeding pairs of African Penguins at close range. You may even find one or two of these enchanting creatures walking alongside you on the boardwalk.

Kalk Bay is known for its raw beauty, interesting shops, vast selection of restaurants and stunning views. Kalk Bay is a gem on the False Bay coastline. You could easily spend a full day in this little neighbourhood and still not be able to experience it all!

As we drive past Muizenberg Beach, you will have a photo stop opportunity at the St James Beach well-known for the colourful beach huts. These huts were previously used for changing rooms by sunbathers and is still used for the same reason up until today.

Our return route is past Muizenberg where you will see the coloured beach huts. The beach huts are used as changing rooms. These are reminiscent to the “bathing machine” of the 1800s, which was a cart-like structure that was wheeled down to the water’s edge, allowing the ladies to change into their bathing costumes.

Drop off will be back at guests' accommodation in Cape Town at approximately 18:00 pm.

Informacion Adicional
"Confirmation will be received at time of booking"
"Infant seats available"
"This is a private tour/activity. Only your group will participate"
"Pick up will be between 7:30 and 9:00am"
"Children must be accompanied by an adult"
"Comfortable walking shoes are recommended"
"The duration of transfers are approximate. The exact pick up time will be communicated to you one day before the tour."
"This tour will depart with a minimum of 02 people. There is a possibility of cancellation after confirmation if there are not enough passengers to meet requirements. In the event of this occurring, you will be offered an alternative or full refund."
"We collect all travellers at hotels within 6km radius. Should travellers not meet this requirement, we have a meeting point from 08:30am at The Silo Hotel, Silo Square, Victoria & Alfred Waterfront, Cape Town, 8801"
"Wheelchair accessible"
"Stroller accessible"
"Near public transportation"
"Travellers who are unable to hike the short distance from Cape of Good Hope to Cape Point lighthouse can take the Funicular at a rate of R75.00 per adult and R35.00 per child"
"Small Group Share Tour"
"Most travelers can participate"
"This experience requires good weather. If it’s canceled due to poor weather, you’ll be offered a different date or a full refund"
"This experience requires a minimum number of travelers. If it’s canceled because the minimum isn’t met, you’ll be offered a different date/experience or a full refund"
"This tour/activity will have a maximum of 100 travelers"

Start Time: 9:00 AM
Duration: 8 Hours
Start location: Traveler pickup is offered
We collect all travellers at hotels within 6km radius.
Should travellers not meet this requirement, we have a meeting point from 08:30am - 08:40am at The Silo Hotel, Silo Square, Victoria & Alfred Waterfront, Cape Town, 8801