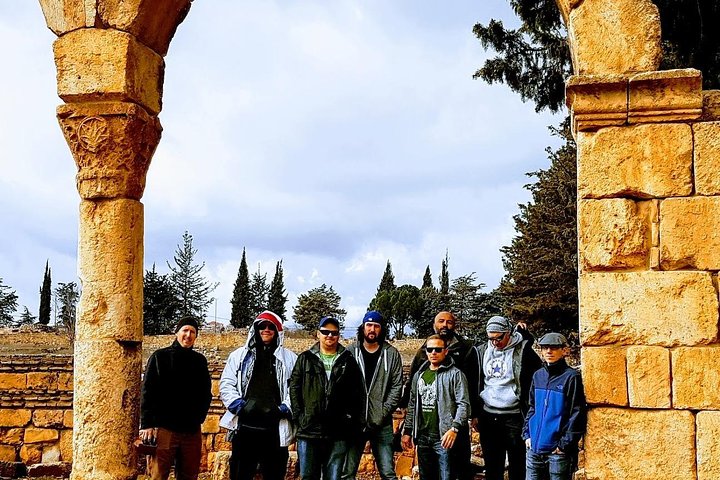 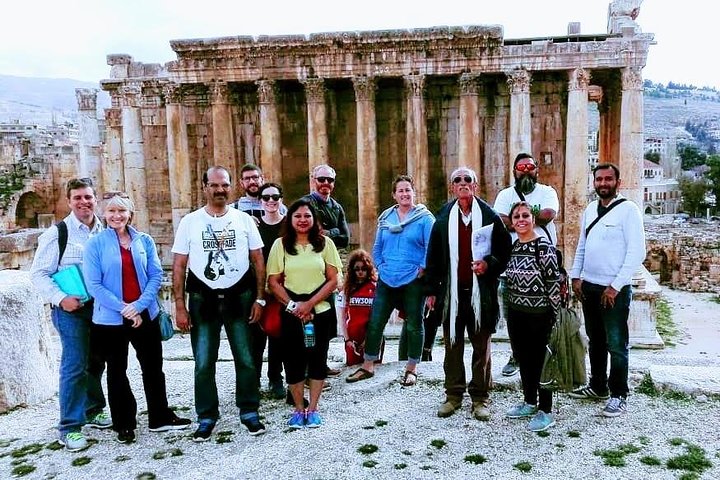 Small-Group Tour with Lunch to Baalbek, Anjar and Ksara

Travel back to ancient times on this small group tour to the Bekaa Valley, the home of the Phoenician city that was known as Heliopolis and one of the finest examples of Imperial Roman architecture at its apogee, and Anjar, the ruins that reveal a very regular layout, reminiscent of the palace-cities of ancient times, and are a unique testimony to city planning under the Umayyads. Get an insight from your guide into the region’s rich heritage as you explore the temples of Baalbek, Baccus, Jupiter and the old city of Anjar. After lunch, Sample some red, white and rosé wines at Château Ksara. This tour include lunch, wine tasting and all entrance fees as well as hotel pick-up.

Baalbek, is home to the Baalbek temple complex which includes two of the largest and grandest Roman temple ruins: the Temple of Bacchus and the Temple of Jupiter. It was inscribed in 1984 as an UNESCO World Heritage site.
This Phoenician city, where a triad of deities was worshipped, was known as Heliopolis during the Hellenistic period. It retained its religious function during Roman times, when the sanctuary of the Heliopolitan Jupiter attracted thousands of pilgrims. Baalbek, with its colossal structures, is one of the finest examples of Imperial Roman architecture at its apogee.

The complex of temples at Baalbek is located at the foot of the south-west slope of Anti-Lebanon, bordering the fertile plain of the Bekaa at an altitude of 1150 m. The city of Baalbek reached its apogee during Roman times. Its colossal constructions built over a period of more than two centuries, make it one of the most famous sanctuaries of the Roman world and a model of Imperial Roman architecture. Pilgrims thronged to the sanctuary to venerate the three deities, known under the name of the Romanized Triad of Heliopolis, an essentially Phoenician cult (Jupiter, Venus and Bacchus).

Baalbeck roman ruins, Lebanon's greatest Roman treasure, can be counted among the wonders of the ancient world. The largest and most noble Roman temples ever built, they are also among the best preserved.

The Temple of Jupiter is a colossal Roman temple, the largest of the Roman world, situated at the Baalbek complex in Heliopolis. The temple served as an oracle and was dedicated to Jupiter Heliopolitanus.
It is not known who designed the temple, nor exactly when it was constructed. Work probably began around 16 BC and was nearly complete by about ad 60. It is situated at the western end of the Great Court of Roman Heliopolis, on a broad platform of stone raised another 7 m (23 ft) above the huge stones of the foundation, three of which are among the heaviest blocks ever used in a construction.
It was the biggest temple dedicated to Jupiter in all the Roman empire. The columns were 30 meters high with a diameter of nearly 2.5 meters: the biggest in the classical world. It took three centuries to create this colossal temple complex.

The Temple of Bacchus is part of the Baalbek temple complex located in the Bekaa Valley, Lebanon. The temple complex is considered an outstanding archaeological and artistic site of Imperial Roman Architecture and was inscribed as an UNESCO World Heritage site in 1984. The Temple of Bacchus is one of the best preserved and grandest Roman temple ruins; its age is unknown, but Its fine ornamentation can be dated to the second century CE.

The Temple of Venus was built in the third century. Built on a horseshoe-shaped platform, it consists of a circular shrine with a square entrance that is almost as big. The outer façade of the shrine is graced by five niches, which means that there is not a single square wall. In the niches are representations of doves and shells, which has been taken as evidence that the shrine was dedicated to Venus.

Stop At: Stone of the Pregnant Woman, Lebanon

The Stone of the Pregnant Woman is a worked Roman monolith in Baalbek, Lebanon. Together with another ancient stone block nearby, it is among the largest monoliths ever quarried. The two building blocks were presumably intended for the nearby Roman temple complex, and are characterized by a monolithic gigantism that was unparalleled in antiquity.

The city of Anjar was founded by Caliph Walid I at the beginning of the 8th century. The ruins reveal a very regular layout, reminiscent of the palace-cities of ancient times, and are a unique testimony to city planning under the Umayyads.

The Umayyad Ruins of Aanjar bears outstanding witness to the Umayyad civilization and a good example of an inland commercial centre, at the crossroads of two important routes: one leading from Beirut to Damascus and the other crossing the Bekaa and leading from Homs to Tiberiade. The site of this ancient city was only discovered by archaeologists at the end of the 1940s.
The ruins of Anjar include the walls of the Umayyad palace, harems, a mosque, the great palace of the Caliph, thermal baths, and many pillars which include some elements of the Roman architectural style.

Château Ksara is a wine company in The Beqaa Valley Lebanon. Founded in 1857 by Jesuit priests. Château Ksara developed the first dry wine in Lebanon. Château Ksara produces approximately 3 million bottles annually. Its wines are exported to over 40 countries.

Start Time: 8:00 AM
Duration: 8 Hours
Start location: Traveler pickup is offered
We pick up travellers from all hotels within Beirut city centre