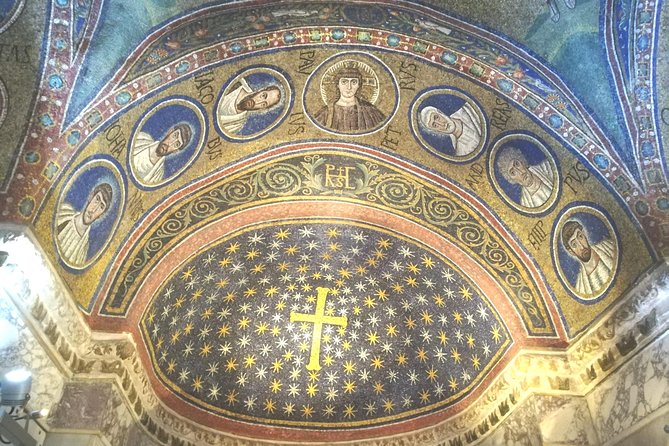 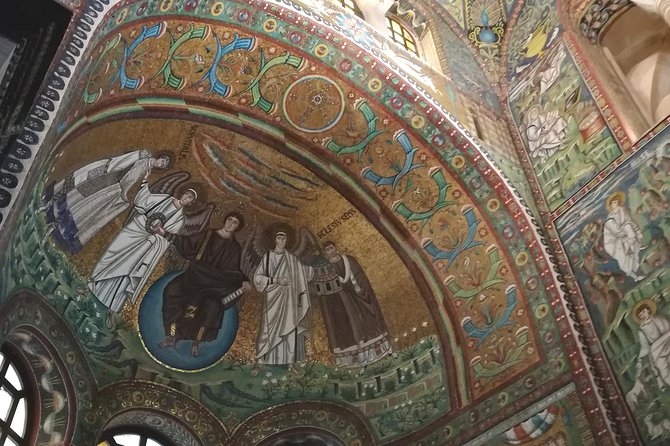 Take a journey in this culturally rich, deeply historic and well-preserved towns, with our exclusive walking tour for a unique and unforgettable experience. You will see the highlights of Ravenna, with its mosaics, and Bologna just in one day with a top rated & local guide.
The tour will start in Ravenna where you will spend about 3 hours, then you will travel by train or your own car to Bologna where the guide will led another 3 hours tour.

This is the oldest building in Ravenna being built in the 5th century, the entire upper surface of the mausoleum’s interior is covered with mosaics on a blue ground. This is just the first place where you will be astonished by the elegance of this form of art.

Here you will find the teachings, miracles, Passion, and Resurrection of Christ depicted in mosaics, it truly is a stunning example of the finest technique.

This octagonal church is built of marble and capped by a lofty terra-cotta dome, again here you will find exceptional mosaics depicting the Old and New Testament

Stop At: Dante's tomb and Quadrarco of Braccioforte, Via Dante Alighieri 9, 48121, Ravenna Italy

The Tomb of Dante, the Quadrarco of Braccioforte, the San Francesco Basilica and its museum form the "Zone of Silence", the area preserve the memory of Dante in Ravenna.

Pass By: Via dell'Indipendenza, Bologna Italy

You will walk through the main street of Bologna

One of the main park in Bologna

Enjoy a little piece of Venice in Bologna!

The tour will continue to San Petronio church

Enjoy the colours of the market in the city center

Asinelli and Garisenda towers, even caught the eye of the great poet Dante Alighieri whom mentioned them in the Divine Comedy. These towers appear to tilt even more alarmingly than the famous leaning tower in Pisa because of their narrow shape.

Informacion Adicional
"Confirmation will be received at time of booking"
"Not wheelchair accessible"
"Near public transportation"
"Travelers should have a moderate physical fitness level"
"This is a private tour/activity. Only your group will participate"
"Face masks required for travelers in public areas"
"Face masks required for guides in public areas"
"Social distancing enforced throughout experience"
"Regular temperature checks for staff"
"Temperature checks for travelers upon arrival"