Mykonos Catamaran Daytime Or Sunset Sailing With Food And Drinks 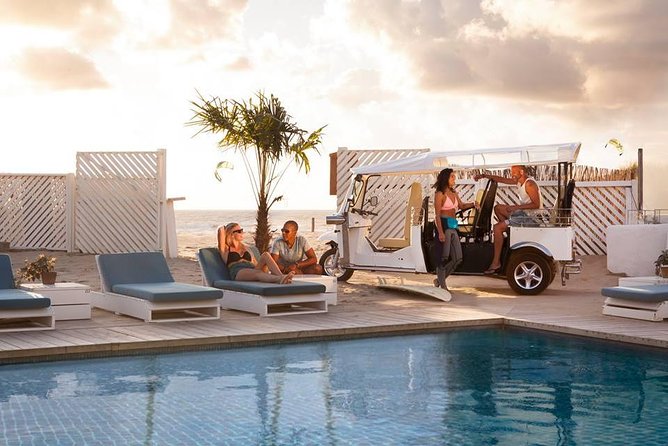 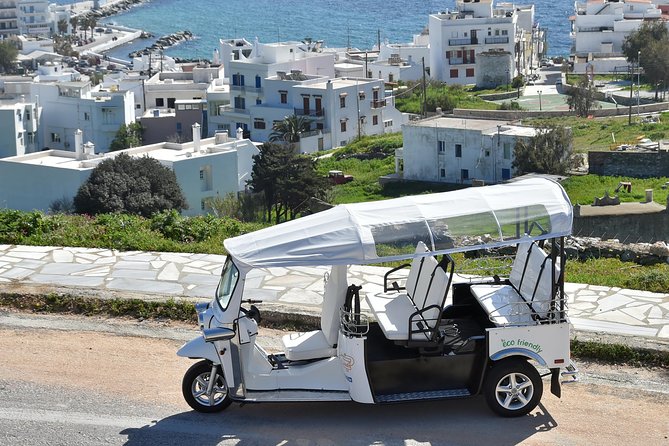 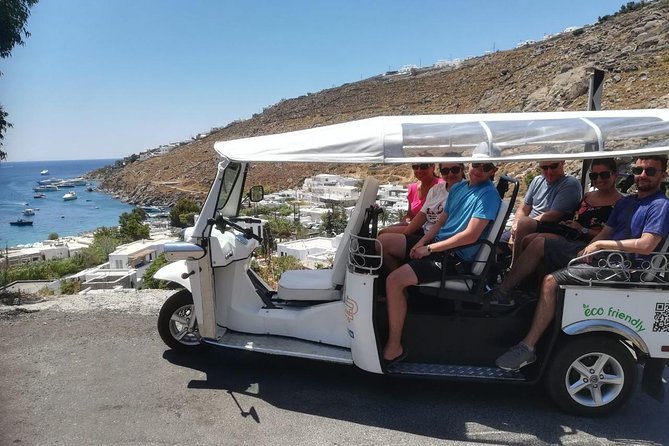 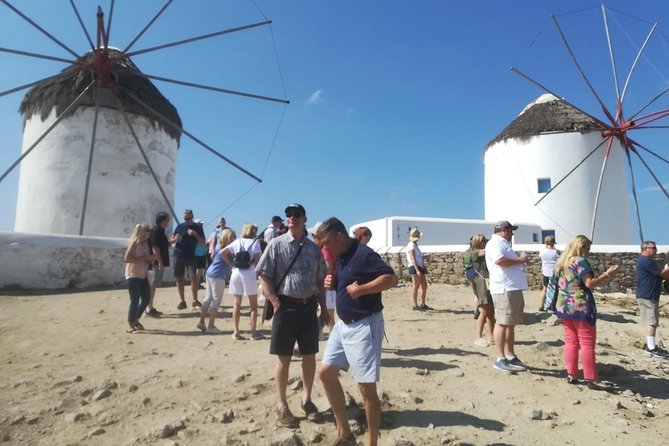 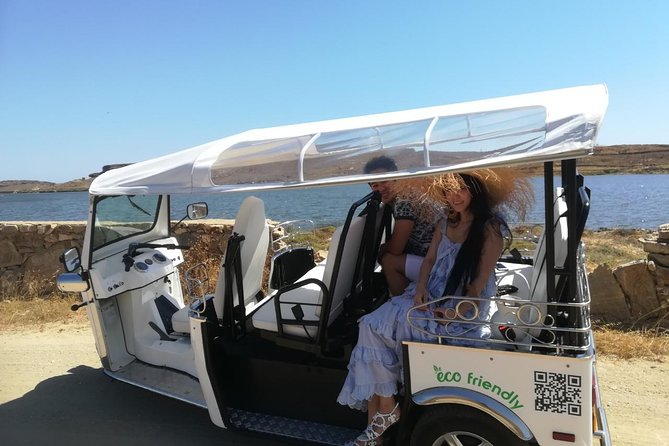 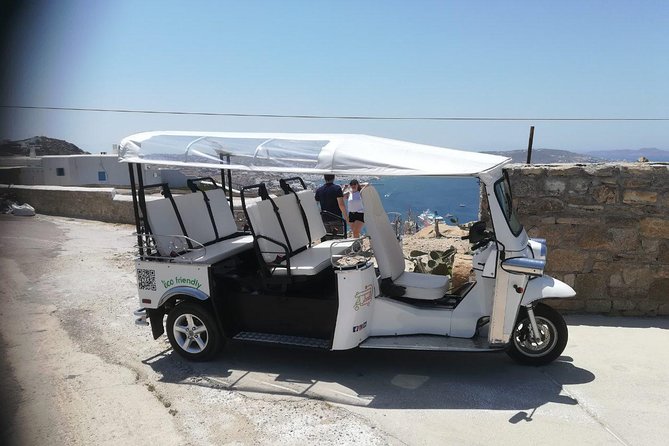 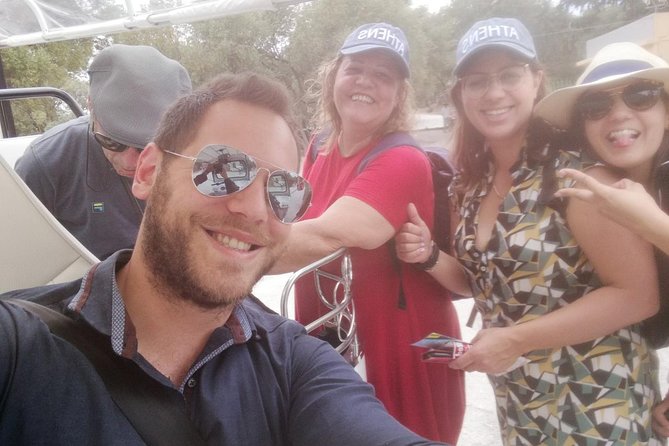 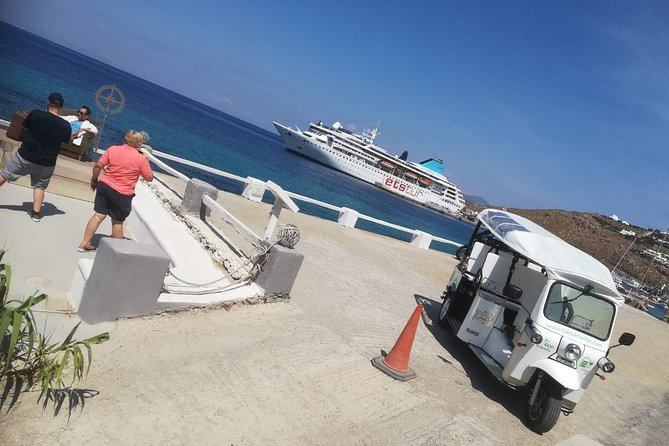 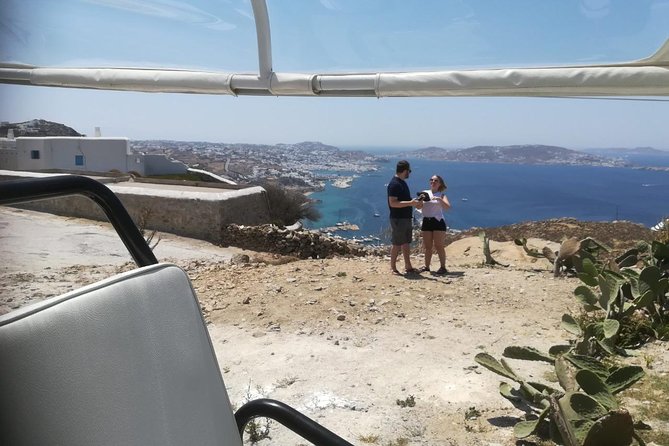 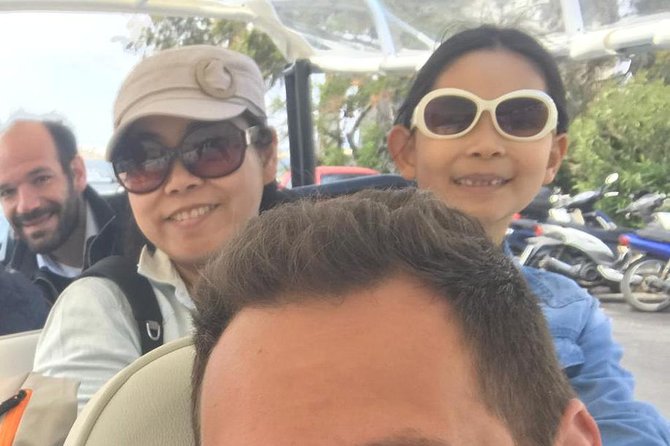 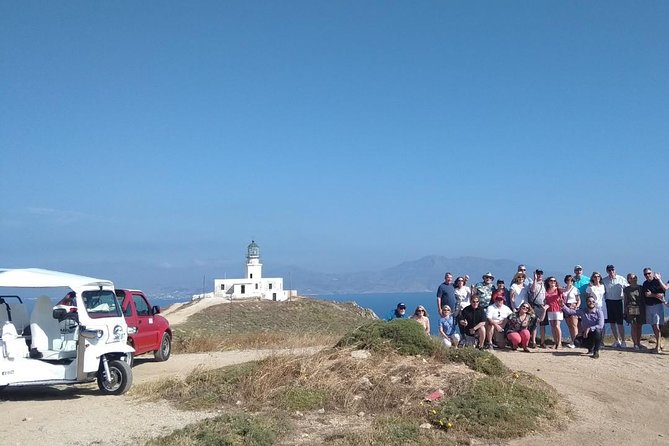 First time in Mykonos Island our ECO-friendly, 100% Electric TUK TUK vehicles are at your service! We are private and commuting with style. All our private tours are operated via Tuk Tuks, which are 100% electric tricycles that make it easy for everyone to enjoy a 360° city view. All the tours are booked privately for our customers, customers' family, and friends. We respect our clients' individuality and privacy. We promise our foreign friends an exciting itinerary full of culture and lots of fun! So #enjoytheride with Comfort, Luxury & Style!
.
.Our company is a proud gold partner of Cruise Line International Association (CLIA), aiming at offering a high standard and unique experience to cruise passengers.

The Archaeological Museum of Mykonos is a museum, in Mykonos, in Greece. Its collections include exhibits dating from the Prehistoric to the Hellenistic period.

Manto Mavrogenous (Greek: Μαντώ Μαυρογένους) (1796 – July 1848) was a Greek heroine of the Greek War of Independence. A rich woman, she spent all her fortune for the Hellenic cause. Under her encouragement, her European friends contributed money and guns to the revolution.

The Agricultural Museum of Mykonos is an open-air site, although part of the display is housed in the Boni windmill, dating from the 16th century and belonging to the Folklore Museum of the island.

The core of the Mykonian Agricultural Museum, the first open-air museum in Greece, is Boni's windmill.
The Cyclades islands are among the windiest areas in the Mediterranean, particularly Mykonos, where the calm days number no more than ten during the whole year! The mykonian windmill is a heavy three-storey cylindrical stone stracture.
The raised basement is used for gathering and weighting the weat. On the middle floor, the grain is gathered to be ground by the ancient grinding machine on the second floor. The windwheel usually consists of 12 wooden antennas with equal-in-number triangular sails.
The windmills have been the most popular of all the sights of Mykonos and are recognised worldwide as a trademark of the island!

Situated close to the Tria Pigadia and next to the Aegean Maritime Museum, this charming house makes for an interesting step back into the island's rich social history

The beneficial to the public institution "Mykonian Folklore Museum" is situated at Castro, in a 18th century building.
There are exposed museum articles sorted by subject. Keys and locks collections, handwoven tapestries, painted plates, old weights and measures, traditional Cycladic sculptures and lighting devices ranging from the ancient oil to the kerosene lamp. Obsedian tools and weapons representing the interior of a 19th century middle class drawing room.19th century bedroom. A 19th century kitchen.
Around the "Mermelechas well"- a known pirate there are large and small traditional Aegean ship models, cannons and pictures of old Mykonian sailing and steamships.
The Museum is open from April till October from 16:30 - 20:30
Sundays - closed

The Aegean Maritime Museum is a maritime museum in Mykonos, Greece. The founder and chairman of the museum, George M. Drakopoulos, received the Athens Academy Award and the World Ship Trust's Award for Individual Achievement for the foundation of the museum.

Little Venice is one of the most photographed landmarks on the island of Mykonos. This special spot is full of bars and restaurants that provide the picture perfect view to watch the sunset. overlooking the beautiful sunset. Little Venice is an area that lines the waterfront with rows of 18th century fishing houses with balconies that look out to the sea. With its location build directly on top of the water, you can see how it resembles the Italian city of Venice, hence why it got nicknamed 'Little Venice.’

The Mykonos windmills are iconic feature of the Greek island of the Mykonos. The island is one of the Cyclades islands, which neighbour Delos in the Aegean Sea. The windmills can be seen from every point of the village of Mykonos, the island's principal village, which is frequently called the Chora (which translates to "Country" in Greek, but refers to an island's "Town") on Greek islands. The windmills are the first thing seen when coming into the harbour of Alefkandra, as they stand on a hill overlooking the area. Most windmills face towards the North where the island's climate sources its strongest winds over the largest part of the year. There are currently 16 windmills on Mykonos of which seven are positioned on the landmark hill in Chora. Most of them were built by the Venetians in the 16th century, but their construction continued into the early 20th century. They were primarily used to mill wheat. They were an important source of income for the inhabitants. Their use gradually declined until they ceased production in the middle of the 20th century. The architecture of each of them is similar, all have a round shape, white colour and a pointed roof and very small windows. Such windmills are found in almost all Cyclades islands. One of these windmills has been transformed into a museum. The whole village of Chora and part of the harbour are visible from this point.

Ornos is a village on the Greek island of Mykonos. It sits on a narrow isthmus between 2 beaches, and its streets are lined with tavernas and hotels. North, the strong winds of Korfos Beach make it popular for kitesurfing. To the south, the sheltered curve of Ornos Beach is dotted with sunloungers and umbrellas. Boats run from Ornos to nearby beaches, and to the island of Delos, known for its archaeological ruins.

Psarou beach is 5 km from the town of Mykonos. It is one of the most popular and famous beaches on the island, with pure and clean white sand and crystal clean waters (the waters are always calm, as the beach is enclosed by mountains around), ideal for sunbathing and relaxing and also for watersports.

Platis Gialos is a coastal village with many tourist accommodations. Located on the south side of the island, just 4.5 km from Mykonos Town. The beach of Platis Gialos (the longest beach on the island), with the endless golden shore and plenty of facilities attracts lovers of water sports such as water ski or jet ski that are available here. Platis Gialos beach is also great for swimming, sunbathing, boating, fishing, and many more aquatic activities.

Paradise beach Mykonos is located between Paranga Beach and Super Paradise Beach and is just next to Platis Yialos Beach. The famous Paradise beach is a nice, flat beach. There are a number of popular bars and the majority of people on the beach are youngish. Nudists also frequent this beach. Water sports facilities and a diving centre are available in Paradise Beach.

Time for some Cheese tasting ! :-)
The guests get a basic tour of the premises and assortment of our cheeses with a glass of wine or any beverage.

If you want to learn how to make your own cheese, the best place to start may be a cheese-making course. No more boring theoretical classes, here everything is hands-on! Indeed, everyone gets involve in the making of the cheese so everyone can learn and have fun. Local experts cheese makers are great to get you trained on cheese-making, offering an introduction to making cheese, the chance to see an operating cheese production facility, and some cheese-making recipes to take home.
Participants will learn how to take the necessary steps to make their cheeses more naturally, without packaged starters, additives and chemicals, and how to source the best possible milk for their cheesemaking. Workshops are demonstration style -we all make cheese together round the table. We are a loving bunch, and enjoy answering questions along the way! Don’t hesitate to yell “Irene!” from across the room! Workshop’s are a lot of fun, and depending on the group – they can get rowdy- !
Classes range from 45-60 minutes providing a communal cooking experience catering for kitchen novices to cooking enthusiasts.
Upon arrival, you will receive a warm welcome from the Mykonos Farmer’s team, ready and waiting to check you in and settle you into your cooking experience.

Informacion Adicional
"Confirmation will be received at time of booking"
"Infants must sit on laps"
"Service animals allowed"
"Near public transportation"
"Not wheelchair accessible"
"Most travelers can participate"
"This is a private tour/activity. Only your group will participate"

Duration: 4 Hours
Start location: Traveler pickup is offered
We offer pick up from your hotel

Mykonos Catamaran Daytime Or Sunset Sailing With Food And Drinks