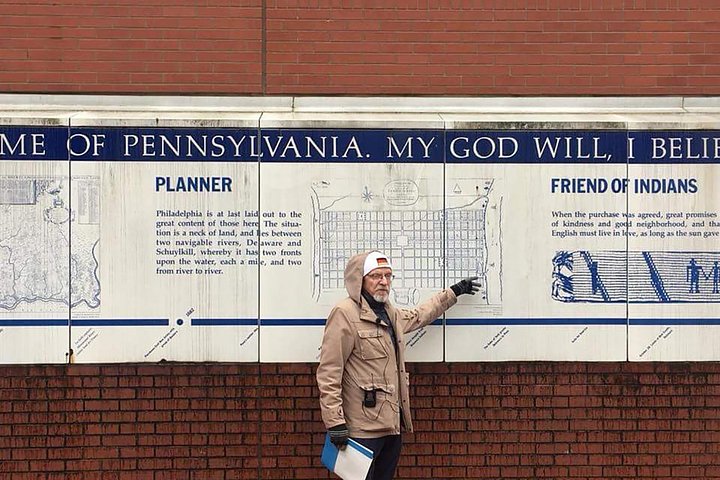 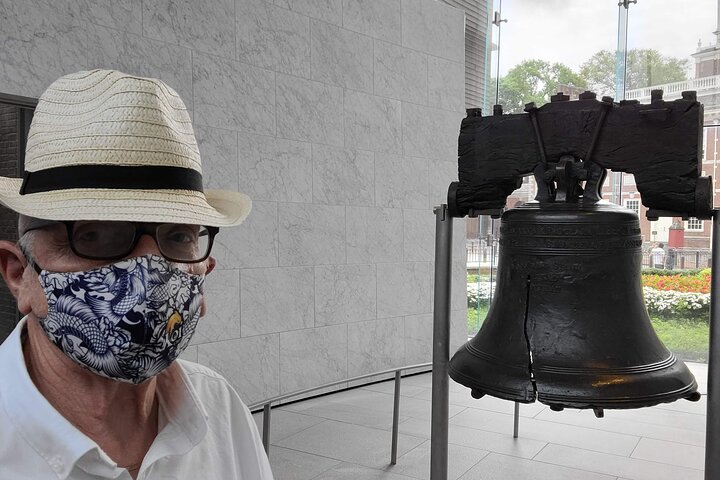 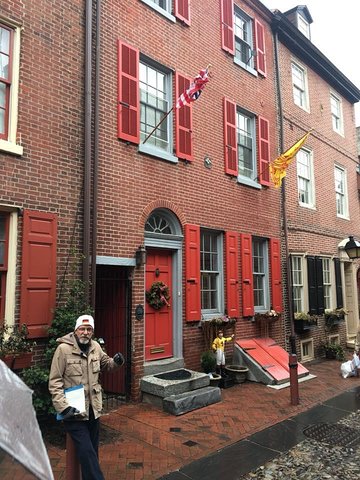 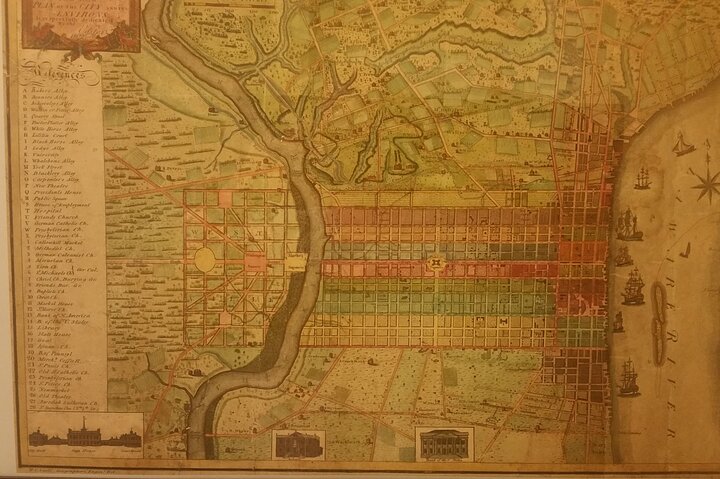 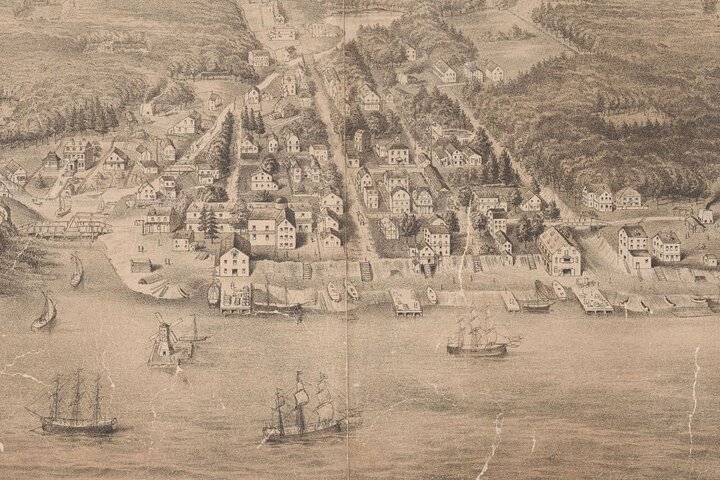 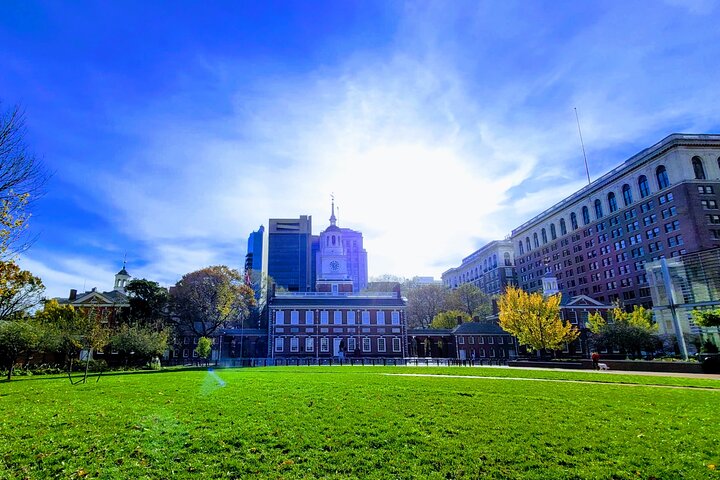 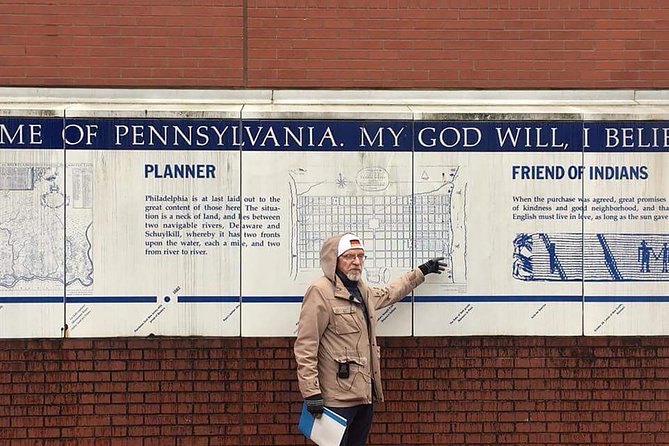 This tour will walk in the path of the original settlers of Philadelphia. Early Philadelphia looked very different from today's metropolis.
This heavily illustrated tour will feature rare images of the waterfront. Learn the history of the waterfront. This tour is the only one offered in Philadelphia covering this time period and area We walk along the current waterfront and nearby neighborhoods.
In addition to the attractions listed below, tour also covers The Man Full O' Trouble Tavern, the site of the Tun Tavern(birthplace of the Marine Corps) and the last remaining set of Penn Steps ordered by William Penn to allow access to the waterfront.
Tour is also available in German
(Tour also available as 75 minute Zoom lecture

Tour starts here with details and images of the earliest days of the Philadelphia waterfront. Other locations are outlined in the description. The emphasis is on passing by the physical location, looking at images of how they looked in the 17th and 18th century as welll as learning the history

This stunning example of Greek Revival Architecture stands on the corner of Third and Walnut Streets and currently serves as the park's headquarters. Upon its completion in 1834, the Merchants' Exchange Building became the center of commerce and finance in Philadelphia, housing marine insurance companies, the Philadelphia Board of Trade, and the Philadelphia Stock Exchange throughout the 19th century. (Info courtesy of NPS.GOV)
Outside only

Once the home of Elizabeth and Samuel Powel(Long-time mayor of Philadelphia)
As friends of Benjamin Franklin, John Adams and George Washington (the Washingtons celebrated their 20th wedding anniversary at the house), the Powels entertained in style, and the house shows it.

Furnished with museum-quality clocks, portraits and other treasures, Powel House is among the nation’s best-preserved examples of Georgian architecture.
The home was one of the first to have a dining parlor, beyond which only the closest family friends could pass into the Powels’ private rooms.
Outside only

With more historic buildings from the colonial and federal periods of American history than anywhere else in the United States, many of Philadelphia’s original structures have been preserved in the Society Hill neighborhood

Dedicated to the memory of more than one million innocent men, women and children who perished during the years 1845 to 1850 and to the millions of Irish immigrants who found here in the United States of America the freedom, liberty and prosperity denied to their ancestors in Ireland.

Memorial is a monumental bronze sculpture Glenna Goodacre, the artist who sculpted the Vietnam Women’s Memorial in Washington, D.C., created the monument, including 35 life-sized figures. The bronze work measures a spectacular 30 feet long by 12 feet wide and 12 feet high. The memorial depicts the cruel starvation which claimed one million Irish lives between 1845 to 1850; the harrowing journey to America taken by a million more; and the indomitable spirit of those who arrived safely and resolved to face the challenges of life in a new world.

This bronze monument to Scottish Immigrants depicts a Scottish family led by its patriarch and the faithful Scottish deerhound. His son, who arrived in advance of the rest of the family, is already dressed as a frontiersman, ready for his new life in America.

Created using the ancient “lost wax” method, the monument was sculpted by Terry Jones, who is known for his works in museums and battlefield–from Great Britain to Gettysburg. Laurie Olin, who is of Scottish descent, carried out the landscape design.
(Source: Philadelphia's Lost Waterfront - Harry Kyriakodiss)

Christ Church was founded in 1695 as the first parish of the Church of England in Pennsylvania. It is also where the American Episcopal Church was born.

Christ Church was founded in 1695 as the first parish of the Church of England in Pennsylvania.
The current Christ Church building was constructed between 1727 and 1744, taking the church from a small brick-and-wood structure to a grand example of Georgian architecture. The interior is just as impressive as its exterior, featuring a baptismal font from the 1300s that was donated by the church in London where William Penn was baptized.
Info courtesy of VisitPhiladelphia
Outside only

Built in 1702, Elfreth’s Alley has the distinction of being the oldest residential street in the entire country, as it has been continuously inhabited since its inception. Located just off Front Street, between Arch and Race Streets, this narrow lane is home to gorgeous, original colonial-era homes and draws many tourists every year.
The street was not part of Philadelphia’s original city plan, but because of overcrowding by local merchants and tradesmen, landowners John Gilbert and Arthur Wells purchased the street, intending it as a cart path. The name comes from Jeremiah Elfreth, who was a blacksmith in the 18th century, but who was also a prominent property owner.

Originally, this alley was entirely populated by tradesmen, including glassblowers, furniture builders, smiths who made silver and pewter, and glassblowers. Towards the end of the 18th century, most of the households were actually headed by women.

Informacion Adicional
"Confirmation will be received at time of booking"
"Wheelchair accessible"
"Tour covers about 2 miles(3 kilometers) at a very leisurely pace"
"Tour runs rain or shine."
"Children welcomed and not counted against maximum group size."
"Operated by a multi-lingual guide (English and German)"
"Stroller accessible"
"Service animals allowed"
"Near public transportation"
"Transportation is wheelchair accessible"
"Surfaces are wheelchair accessible"
"Not recommended for travelers with back problems"
"No heart problems or other serious medical conditions"
"Masks required. Masks and sanitizer available from guide."
"Social distancing from guide required"
"Travelers should have a moderate physical fitness level"
"This experience requires good weather. If it’s canceled due to poor weather, you’ll be offered a different date or a full refund"
"This is a private tour/activity. Only your group will participate"
"Contactless payments for gratuities and add-ons"
"Guide is fully vaccinated but will wear mask if asked to. Guests do not need to wear masks."