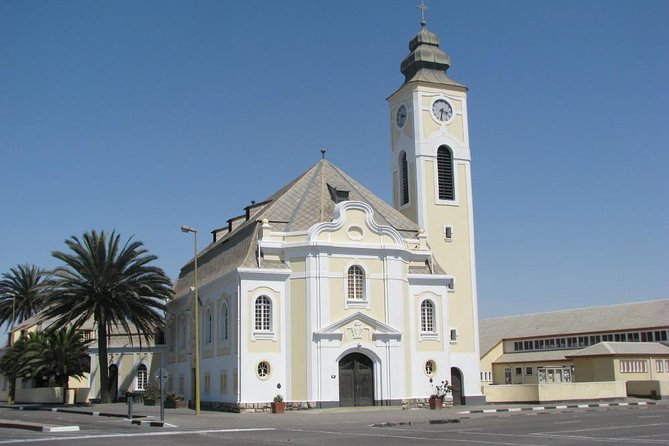 Swakopmund, known as the prime holiday resort of Namibia, was founded in August 1892 by the German Colonial Reich. For many years this town was the main harbour for the territory, being served by the mole and later the jetty. Both these structures still exist. Many historical buildings dating from that area are still being used and are rated as historical monuments. The distinct German Colonial character of Swakopmund has been well preserved and is undoubtedly a key attraction for tourists and entrepreneurs.
The walking tour of Historical Swakopmund concentrates on the historical part of Swakopmund. Your guide will relate the history of Swakopmund and explain the origin of the various historical buildings in town. These include the Woermannhaus, a superb example of early architecture, Prinzessin-Rupprecht-Heim, a striking reminder of the way of life of the early years, and the Marine Memorial, a monument of superb detail.

Visit the Woermannhaus in Bismarck Street which is a superb example of architect Friedrich Höft's "Fachwerkbau" style. The building was erected in 1894 by the Damara and Namaqua Trading company and was extended in 1903 and 1904 when wood panelled offices were added. In earlier days the courtyard was filled with an evergreen garden. The building was used as the headquarters for the leading trading company in (then) South West Africa.- the Damara and Namaqua Trading Company (later known as Woermann, Brock & Co). Woermannhaus was also home to selected officials and employees of the company in 1909. The Damara Tower in the North-West corner was a lofty lookout which also served as a flag-mast and navigation point.

Visit the Swakopmund iron Jetty which was constructed in 1912 to replace a wooden jetty which had become derelict. Two firms based in Mannheim, Germany, received the contract, and plans were made to build a jetty of 640m. the rocky area contributed to major difficulties during construction and the company was forced to develop and incorporate a drilling programme to overcome these obstacles. When the First World War broke out, the jetty was left uncompleted and extended to only 262m. However, the jetty was built to such high standards that it endured the merciless pounding of the Atlantic for over 70 years, requiring little or no repair.

See the Prinzessin-Rupprecht-Heim, a striking reminder of the way of life of the early years of our country. This building was built in 1902 and named after the patroness of the Bavarian Association and wife of the heir to the Bavarian throne - Prinzessin Rupprecht. The Prinzessin-Rupprecht-Heim was originally built as a military hospital and was occupied in 1902. In 1909 the hospital closed and was converted into a convalescent home in 1911.Two years later the Bavarian Women's Association of the Red Cross took over the building and commissioned extensive renovations - with a donation of 35,000 mark.

See Haus Hohenzollern which was built between 1904 and 1906. This illustrious former hotel is definitely one of Swakopmund's most extraordinary buildings with its cupid and flower adornments, corner pediment edged off with two lions and an imperial image of Atlas with the world on his shoulders. Haus Hohenzollern looms over adjacent buildings and stands tall as an outstanding example of the German Architecture of those years. Despite the harshness of the Namib Desert, the pioneers managed to construct truly unique buildings of enduring beauty.

Visit the German Evangelical Lutheran Church with adjacent parsonage. Rumour has it that in 1905 Pastor Vedder was disappointed to find open-air church services completely unattended. He is said to have returned to his home - a wooden crate without roof, doors or windows -with his sermon still neatly folded and unread. In 1909 the congregation rallied together for building plans to be drawn up so that a church could be built. They would have their way, for Architect Ertl immediately set to work to design a magnificent house of worship in the artistic Neo-Baroque style. F. H. Schmidt was awarded the contract to build the church in 1910 (to the tune of 85,000 Mark) and Franz Schilling in Apolda, Germany, cast the three bells for this church.

Visit the Marine Memorial, a monument of superb detail. It is dedicated to the members of Germany's First Marine Expedition who were killed in action. The statue showing a marine standing beside his fallen comrade was designed by Berlin sculptor, A. M. Wolff, and cast by Gladenbeck A. G. , Berlin. The crew of the gunboat "Panther" presented the monument to the town of Swakopmund on behalf of the Marine Infantery on 26 July 1908. The National Monuments Commission declared the Marine Denkmal a National Monument on 2 January 1969.

Informacion Adicional
"Confirmation will be received at time of booking"
"Not wheelchair accessible"
"Near public transportation"
"Most travelers can participate"
"This experience requires a minimum number of travelers. If it’s canceled because the minimum isn’t met, you’ll be offered a different date/experience or a full refund"
"This tour/activity will have a maximum of 25 travelers"
"Face masks required for travelers in public areas"
"Face masks required for guides in public areas"
"Face masks provided for travelers"
"Hand sanitizer available to travelers and staff"
"Social distancing enforced throughout experience"
"Regularly sanitized high-traffic areas"
"Gear/equipment sanitized between use"
"Transportation vehicles regularly sanitized"
"Guides required to regularly wash hands"
"Regular temperature checks for staff"
"Temperature checks for travelers upon arrival"
"Paid stay-at-home policy for staff with symptoms"
"Contactless payments for gratuities and add-ons"