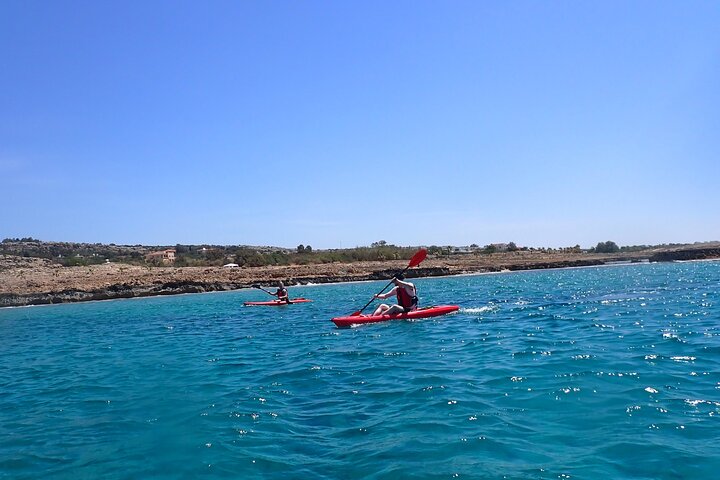 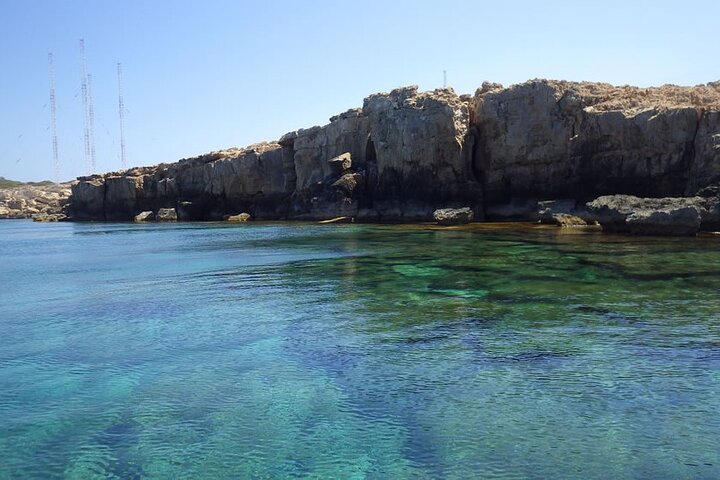 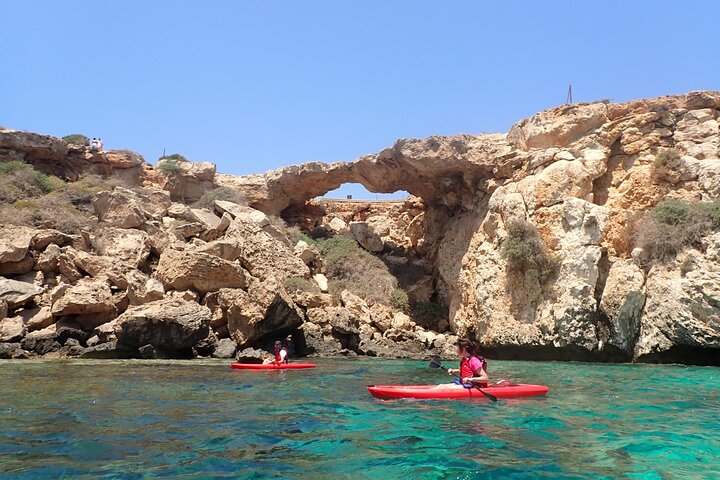 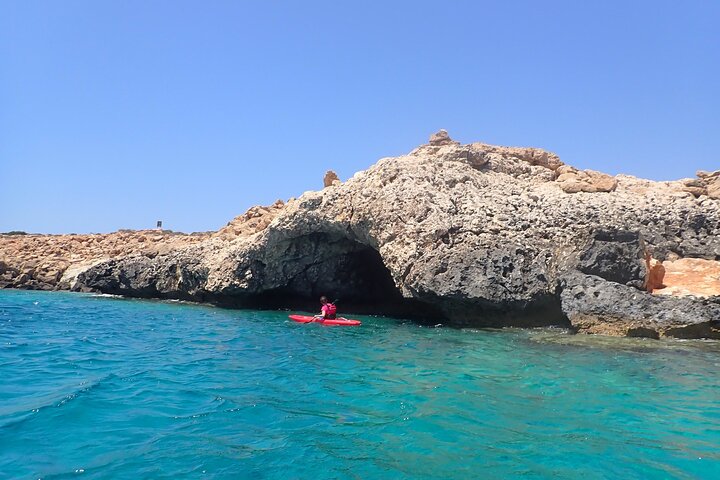 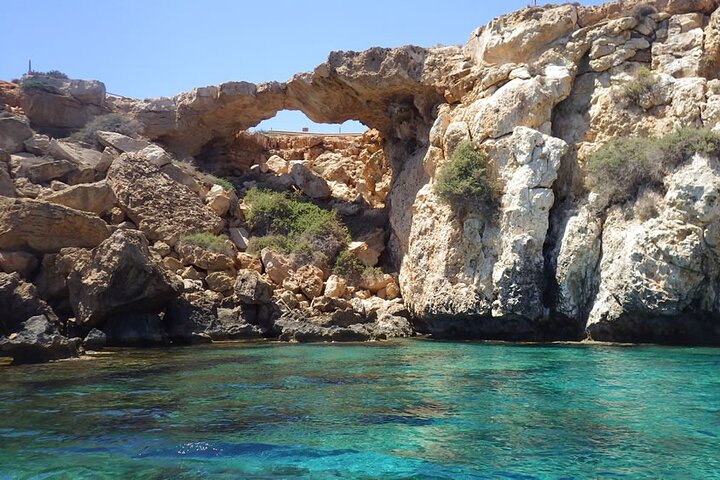 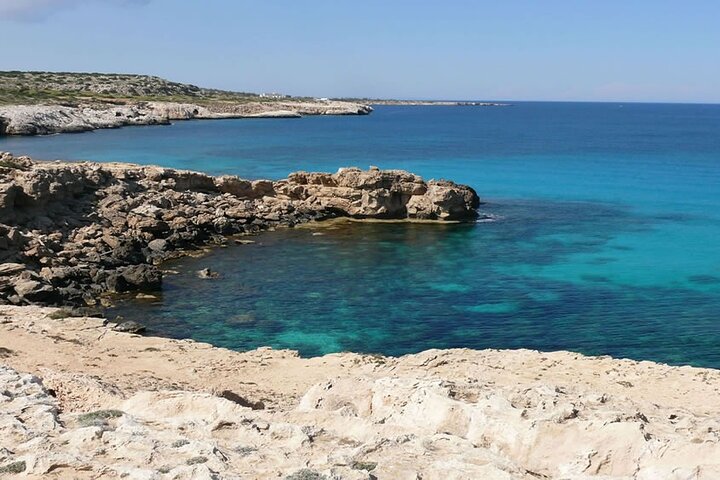 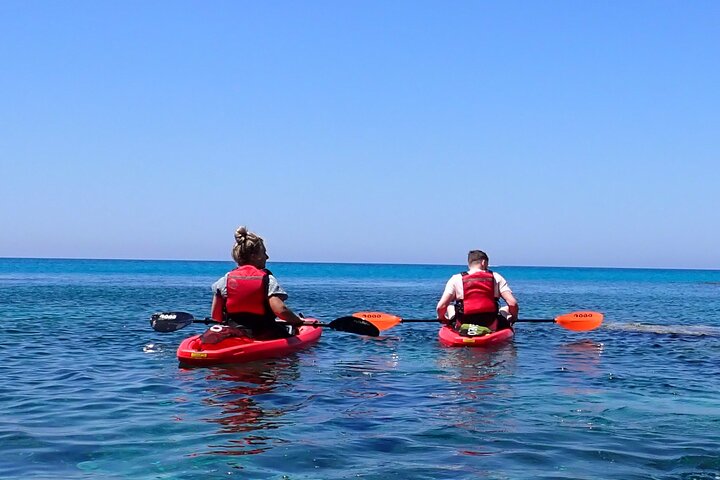 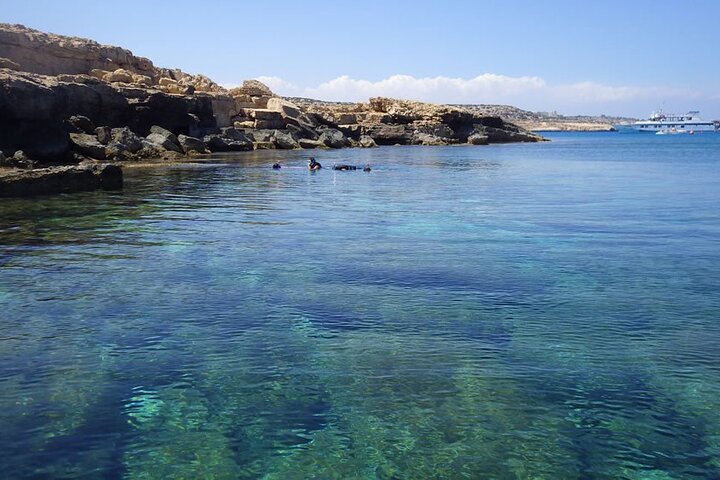 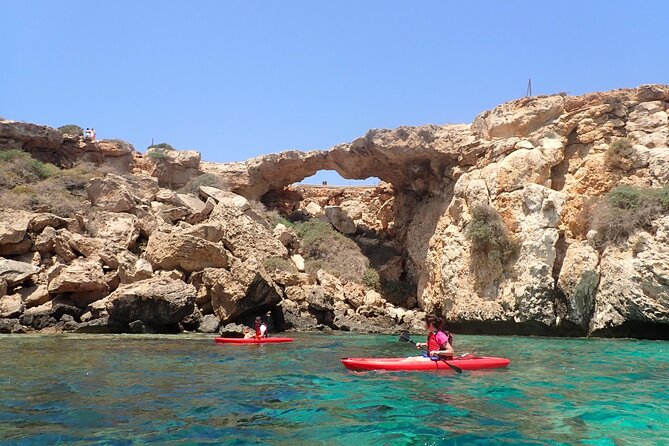 We start from Green Bay beach and initially, we kayak south just outside Cape Greko until we reach the tip of Konnos beach. We continue south past Agioi Anargyroi (chapel and) cave and reach south as far as 'Kamara tou Koraka' ('Crow's arch') natural bridge. We then return back in the opposite direction via Agioi Anargyroi, exploring more of the coastline upto the north end of Konnos beach. If the sea is calm (it very often is during the summer season), it is highly recommended that we also do some snorkeling (if customers like to - there are very good possibilities of spotting sea turtles either in Konnos beach or in Green bay.

A maximum of two travellers kayaking at any time (if there are three or four people in the group, we would need to make arrangements with regards sharing the time on kayaks).

If the customers agree, in case of forecasted choppy sea, instead we kayak around Agia Napa Sea Caves (if the weather is expected to be bad everywhere, we cancel the trip).

The start and finish of our trip. It is very close to a small peninsula called 'Nissia' (islands). A very good place for spotting sea turtles.

The kayaking trip takes place along the south coast of Protaras and mainly the east part of Cape Greko coastline. Cape Greko is characterised by crystal clear usually calm waters, Konnos beach, one of the best on the island, and a rocky coastline with various rock formations, including 'Kamara tou Koraka' (Crow's Arch) natural bridge. The trip is customisable.

The trip passes through Konnos beach. A stop here is highly recommended, for swimming, snorkelling and sea turtle spotting

A cycladic chapel on the coastline of Cape Greko. There is also a sea cave that was a sanctuary just downhill from the chapel

A very particular natural arch, that can be reached by foot and the sea.

Informacion Adicional
"Confirmation will be received at time of booking"
"Not wheelchair accessible"
"Near public transportation"
"Not recommended for travelers with back problems"
"Not recommended for pregnant travelers"
"No heart problems or other serious medical conditions"
"Travelers should have a moderate physical fitness level"
"This is a private tour/activity. Only your group will participate"

Start Time: 09:00 AM
Duration: 6 Hours
Start location: Traveler pickup is offered
In the morning, to be agreed with travellers. The default time is 09:00 (it can be changed by agreement).

From the free part of Nicosia, Larnaca, Agia Napa, Protaras (and other locations). The exact pick-up location to be agreed between the guide and the travellers.